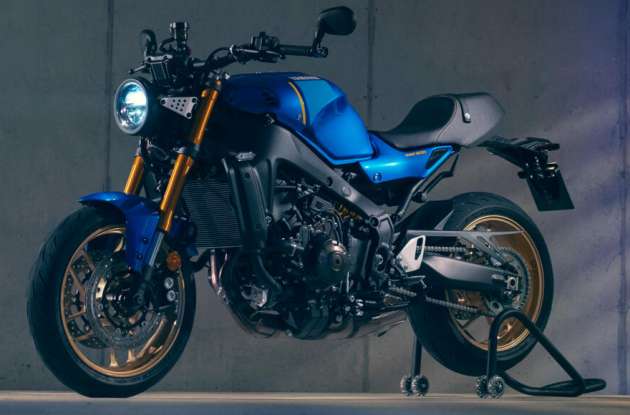 Improving what it calls its “Sports Heritage” motorcycle, Yamaha has released the 2022 Yamaha XSR900, a throwback to the Iwata firm’s racing machines of the 1980s. Decked out in a paint scheme reminiscent of Christian Sarron’s Yamaha YZR-500 in Gauloises Blondes racing livery, the 2022 XSR900 comes with an all-new Yamaha Deltabox frame.

Formed from aluminium, the new frame on the XSR900 is compact and lighter compared to previous with a corresponding increase in longitudinal, lateral and torsional rigidity. The headstock is now 30 mm lower than the previous generation XSR900, increasing feel while cornering while providing a more aggressive riding stance.

Wheelbase is now 1,495 mm longer, an increase of 55 mm, to enhance straight line stability. Done by lengthening the swingarm, Yamaha says the XSR900 now has a sporty and responsive character which is shown in the 14% decrease in rotational inertia around the steering axis.

Bodywork has been updated, the 2022 XSR900 coming with a new tank that has styling cues coming straight out of the 1980s. Containing 15-liters, the fuel tank with look alike race filler cap features cutouts for the rider’s knees and extends a little further back, placing the rider more over the rear wheel.

The braking system has also been upgraded, with a Brembo radial brake master cylinder with adjustable lever activating twin four-piston radial-mount callipers on 298 mm brake discs with ABS as standard. Meanwhile, suspension at the front end is now fully-adjustable KYB gold anodised forks while the adjustable rear monoshock, also from KYB, is tucked away to give the XSR900 a clean appearance at the back end.

Wheels on the XSR900 are 700 grams lighter than before, giving a reduction in unsprung weight allowing for a more responsive suspension. This also has the benefit of decreasing the moment of inertia at the rear of the XSR900 by 11%, increasing response during cornering and braking. 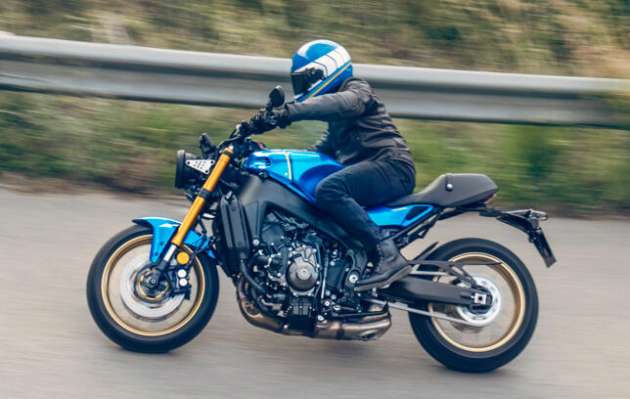 In the engine room, the XSR900 comes with the Euro 5 compliant Yamaha Crossplane 3, displacing 889 cc, equipped with ride-by-wire throttle similar to the unit used on the Yamaha R1. The six-speed gearbox is equipped with a quickshifter and assist and slipper clutch, while cruise control is standard equipment.

Inside the cockpit, a 3.5-inch TFT-LCD display replaces the previous model’s round LCD display and there are four ride modes available from 1 being the most aggressive while the succeeding modes deliver progressively softer power delivery. A six-axis inertial measurement unit provides lean angle sensitive traction control with three levels of adjustment, along with slide control and wheelie control.

LED lighting is used throughout, though the round single headlight is retained while the LED tail light is tucked away under the seat, cleaning up the rear end of the XSR900. For Europe, the 2022 Yamaha XSR900 will come in two colour options – Legend Blue in cyan and yellow, featuring gold-anodised forks and gold painted wheels, and Midnight Black with red highlights, black forks and black hand controls.