We weren’t but a few words into our interview with David Farmer regarding his Brizio-built 1932 three-window coupe when he mentioned he didn’t consider himself a car guy and then went onto tell about his early days in California’s Central Valley wrenching at a gas station, hot rodding jalopies, and dirt track racing in Merced.

In 1972 David and his dad bought farmland in the San Joaquin Valley and the Farmer family became farmers. So maybe what David meant to say was for many years his focus was on farming and not having as much to do with hot rodding cars as he did in his youth. The Brookville-bodied 1932 three-window featured is the latest in a lineup of hot rods David has commissioned Roy Brizio Street Rods to build. In short David said it was the one-on-one experience during the build and fantastic results afterward that keeps bringing him back to commission Brizio Street Rods to construct a car.

The frame for David’s 1932 originated in Ontario, California, at TCI Engineering as laser-cut, TIG-welded, and boxed Deuce rails. At Brizio’s South San Francisco shop Jack Stratton placed the rails in a fixture, pinched the front 3/4 inches on each side and fabricated 1-1/2-inch tubular crossmembers and then TIG-welded into place. The front axle is a 4-inch dropped Super Bell with Super Bell 1937-1948 Ford-style spindles and Vega steering. Stopping side-to-side sway is a Brizio Panhard bar with chrome Pete and Jakes tubular shocks damping up and down movement. 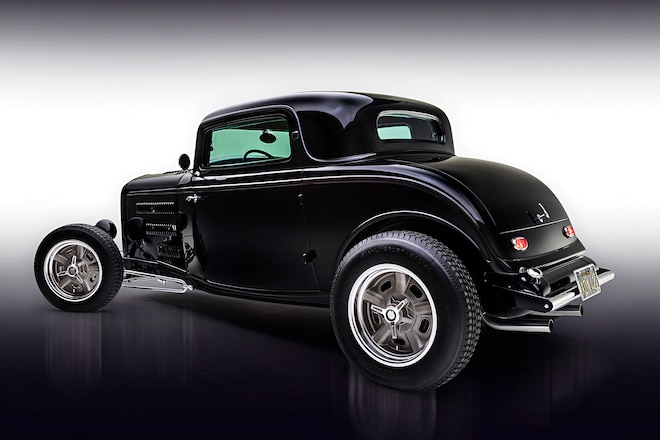 The Pete and Jakes third pedal engages a Modern Driveline Kevlar clutch enabling a Lokar shifter to row through gears on a TREMEC TKO five-speed transmission. The custom driveshaft is from Driveshaft Service. 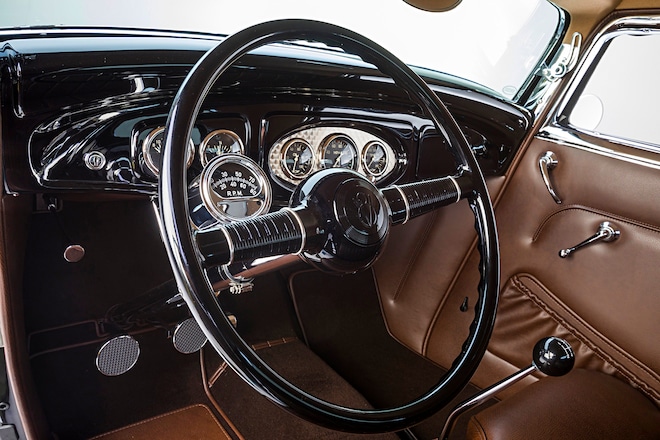 The interior in all Brizio-built cars is custom tailored to suit the owner. When it was time to mount the seat, place the LimeWorks steering column topped with a Juliano’s 1940 DeLuxe steering wheel David drove 200-plus miles to be fitted. Then at about 85 percent near complete David’s coupe left for Sid Chavers Upholstery shop with nothing inside except a full complement of Dynamat covering the floors, interior firewall and inside the trunk and doors. Sid padded and leveled those areas and then laid German velour carpeting and upholstered the interior in hand-tipped brown leather.

Jim Vickery custom-wired the coupe using a Racers Inc. Black Box. The dashboard features a Haneline cluster packed with Classic Instruments and 14.5 V to charge with comes from a Powermaster alternator.

The Brookville three-window body received extensive metalwork from Andrik Albor, including a 3-inch chop and 2-inch channel at the cowl. To counter the channel pitching the A-pillars forward the windshield was laid back to a racier-looking rake. The 1932 radiator shell is a Brookville fitted with a Dan Fink stainless steel grille. After many hours of blocking and repeated guidecoats Darryl Hollenbeck of Vintage Color Studio sprayed the 1932 in PPG black topped with a PPG clearcoat. A color sand and buff followed.

A photograph is worth a thousand words. The images Jorge Nuñez took of David’s coupe do better than words illustrating the staggering amount of detail that goes into a car constructed by Roy Brizio Street Rods. Visual hierarchy begins with the overall look of the 1932 but then as your eye focuses on individual parts like the SO-CAL headlights, Vintique 1946 Ford taillights and stunning show chrome by Sherm’s Custom Plating, the intense attention to detail becomes apparent. 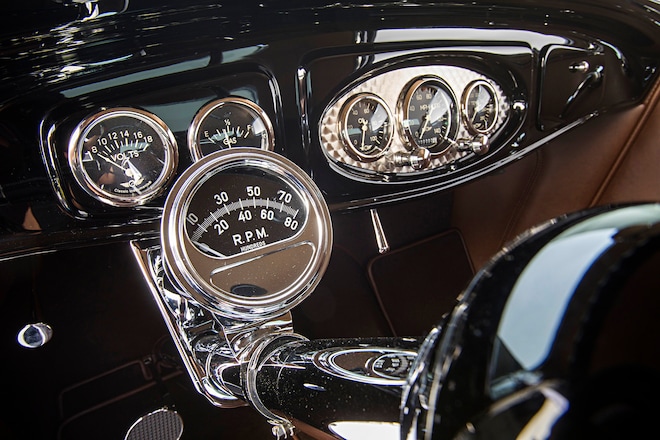 David and Peg Farmer with a collection of Brizio-built cars are patrons of Roy Brizio Street Rods’ art. Isn’t it great there are folks with the means to commission a  professionally built car? Otherwise reading STREET RODDER would be like watching one of those cable TV shows where rusted, mangled 1982 Cadillac hulks are repowered with Isuzu diesel engines held in with duct tape, bailing wire, and tie wraps. And yes, using a chainsaw to clearance a firewall is kind of crude.