A dual-clutch transmission and luxurious Calligraphy model arrive for 2021.

The 2021 Hyundai Santa Fe will receive a rather comprehensive suite of improvements, setting it apart from its popular predecessor (introduced just two years ago). For 2021, the Santa Fe facelift brings two new powertrains, modernized styling, and a luxurious Calligraphy trim level, keeping it competitive among a field of new and updated rivals. Already revealed globally, the 2021 Santa Fe has been officially confirmed for the US.

Chief among those alterations made for our market are two new engines that should hopefully cure the Santa Fe’s occasionally lackluster performance. Now motivated by a pair of 2.5-liter four-cylinder engines (one naturally aspirated and one turbocharged), the 2021 Santa Fe offers more power and improved efficiency relative to its predecessor. What’s more, Hyundai says a 1.6-liter turbocharged hybrid powerplant and an unspecified plug-in hybrid powertrain are coming soon.

The Santa Fe’s most significant changes for 2021 appear under the slinky new skin. Gone are the old 2.4-liter inline-four base engine and 2.0-liter turbocharged optional mill. The new entry-level motor is a 2.5-liter four-banger that makes an estimated 191 horsepower (142 kilowatts) and 182 pound-feet (247 newton-meters). That’s up incrementally from the outgoing 2.4’s 185 hp and 178 lb-ft (138 kW and 241 Nm). As on the 2020 Santa Fe, the base engine is mated to an eight-speed automatic transmission, with front- or all-wheel drive.

The new 2.5-liter “Smartstream” powerplant features both multi-port and direct fuel injection, providing the reduced low-load emissions of the former with the efficiency and power production of the latter. These improvements should help the fuel economy of the 2021 Santa Fe – Hyundai estimates a combined fuel economy rating of 26 miles per gallon with front-wheel drive or 24 with all-wheel drive. 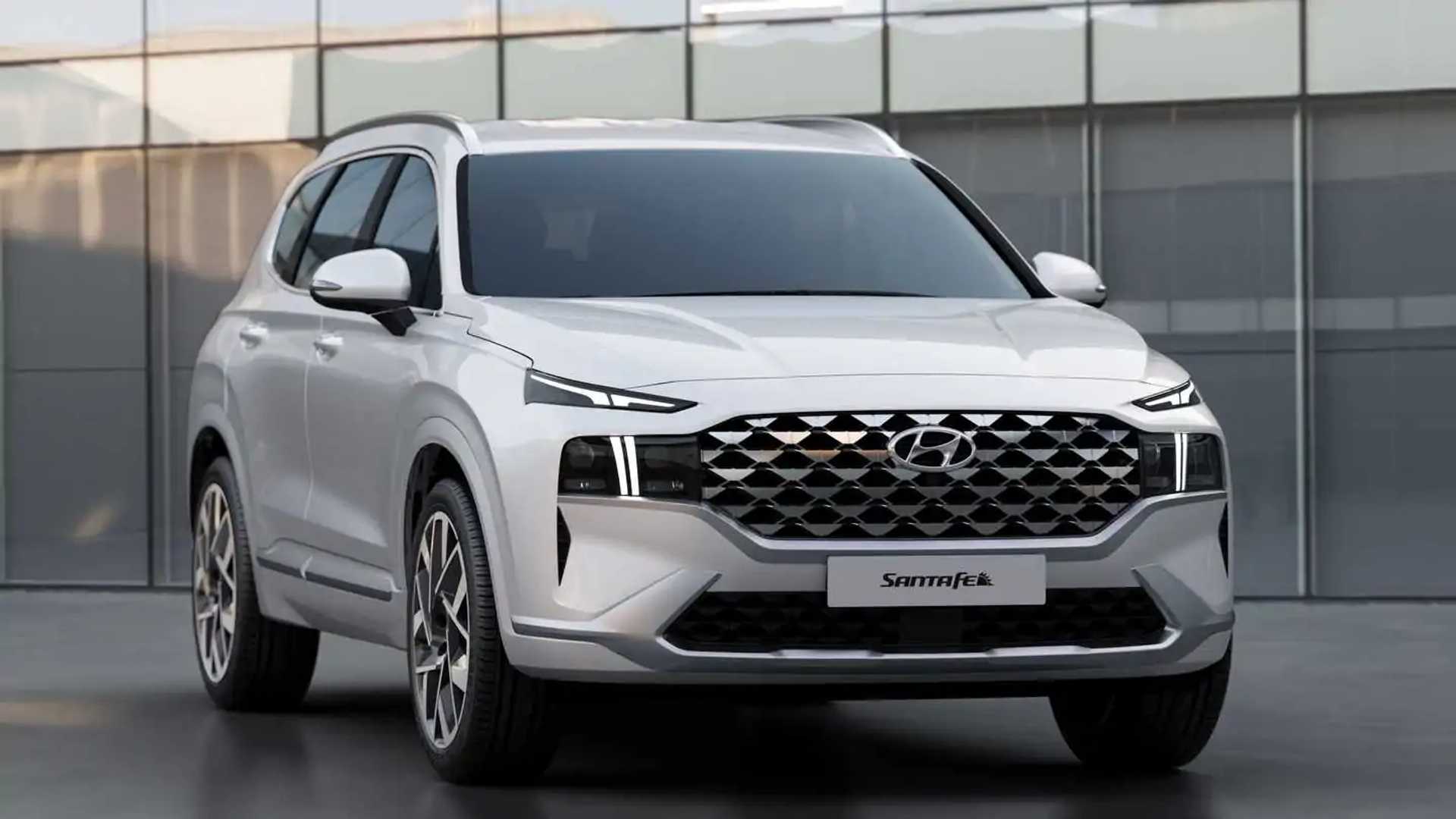 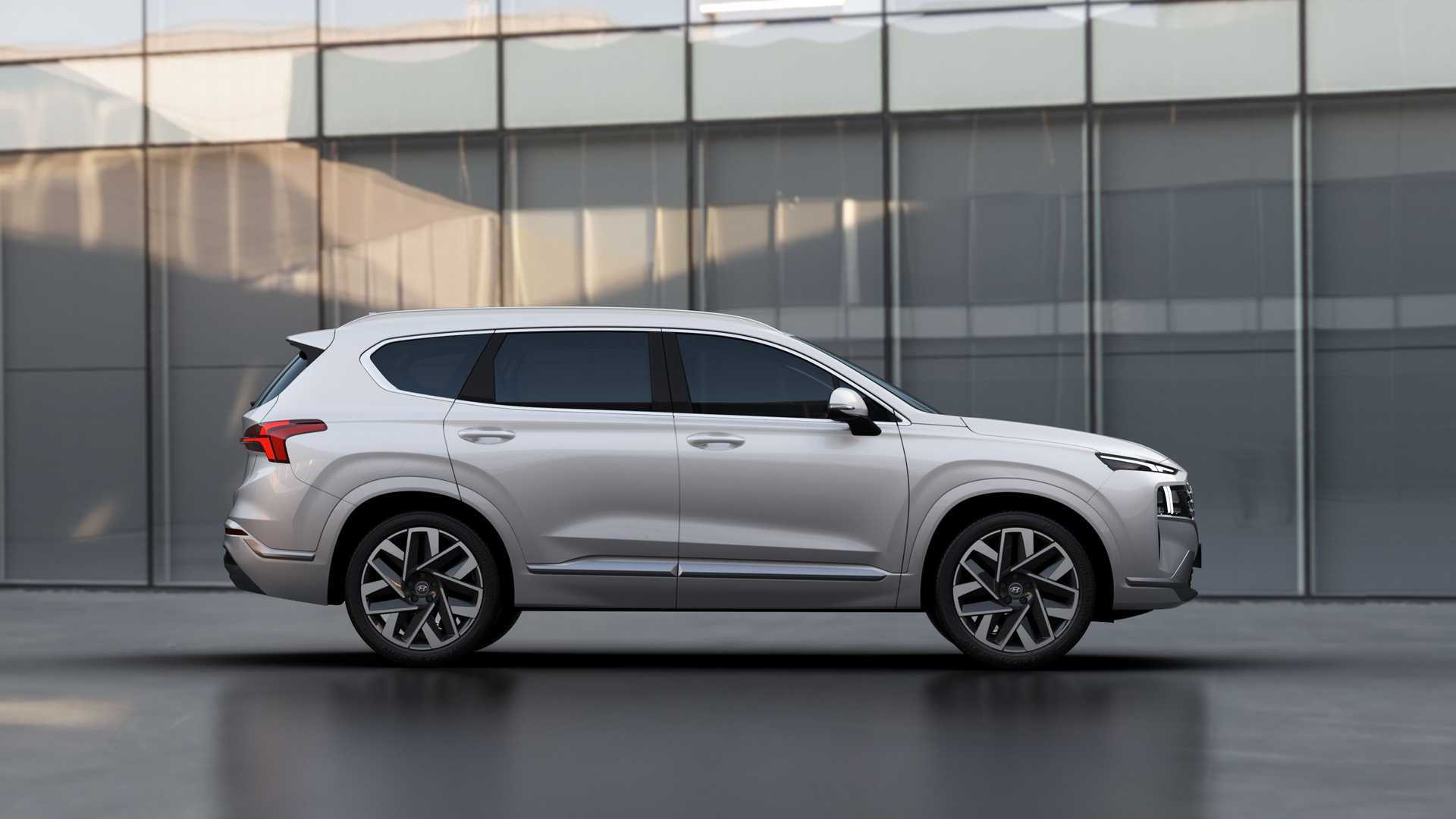 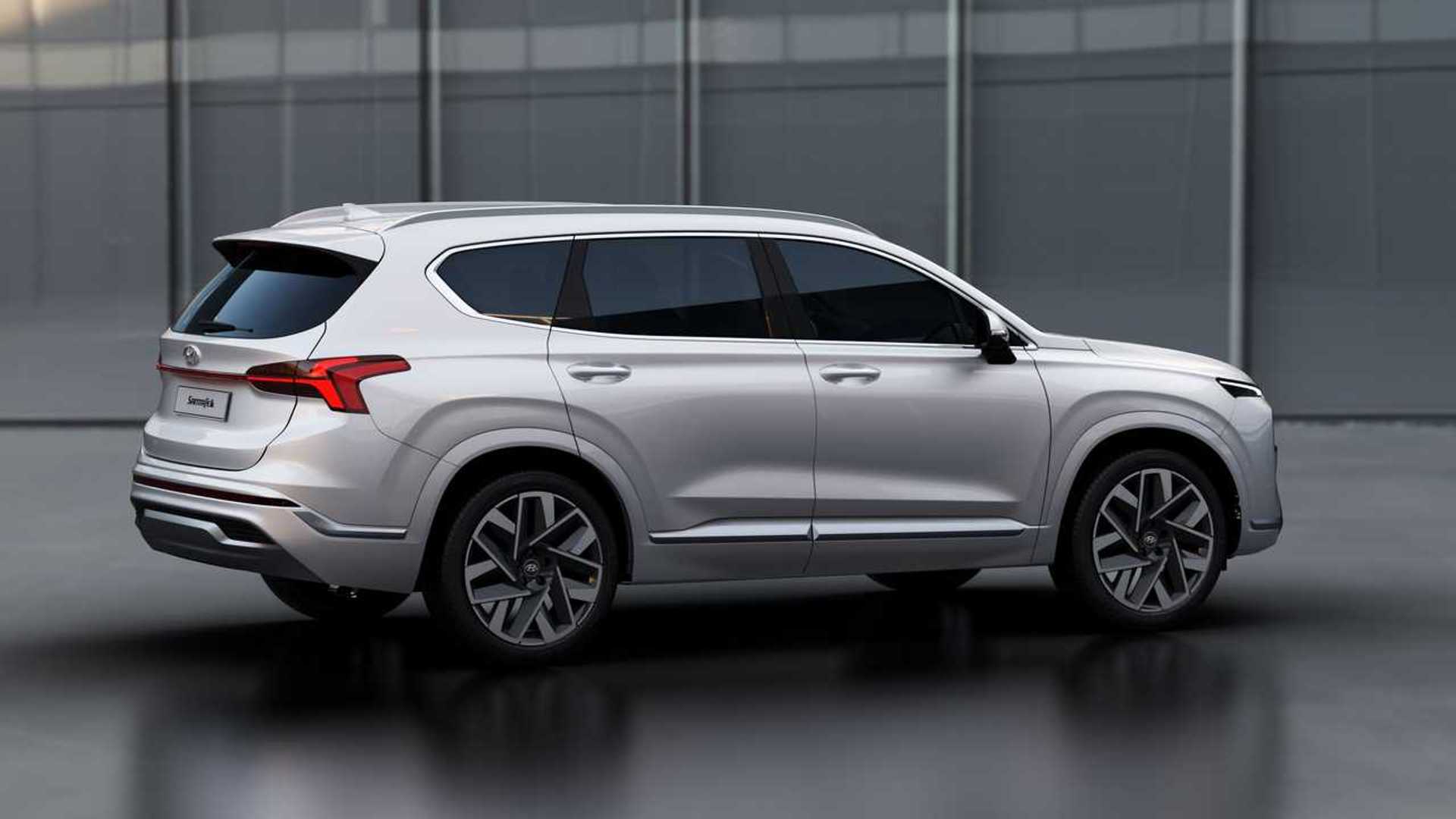 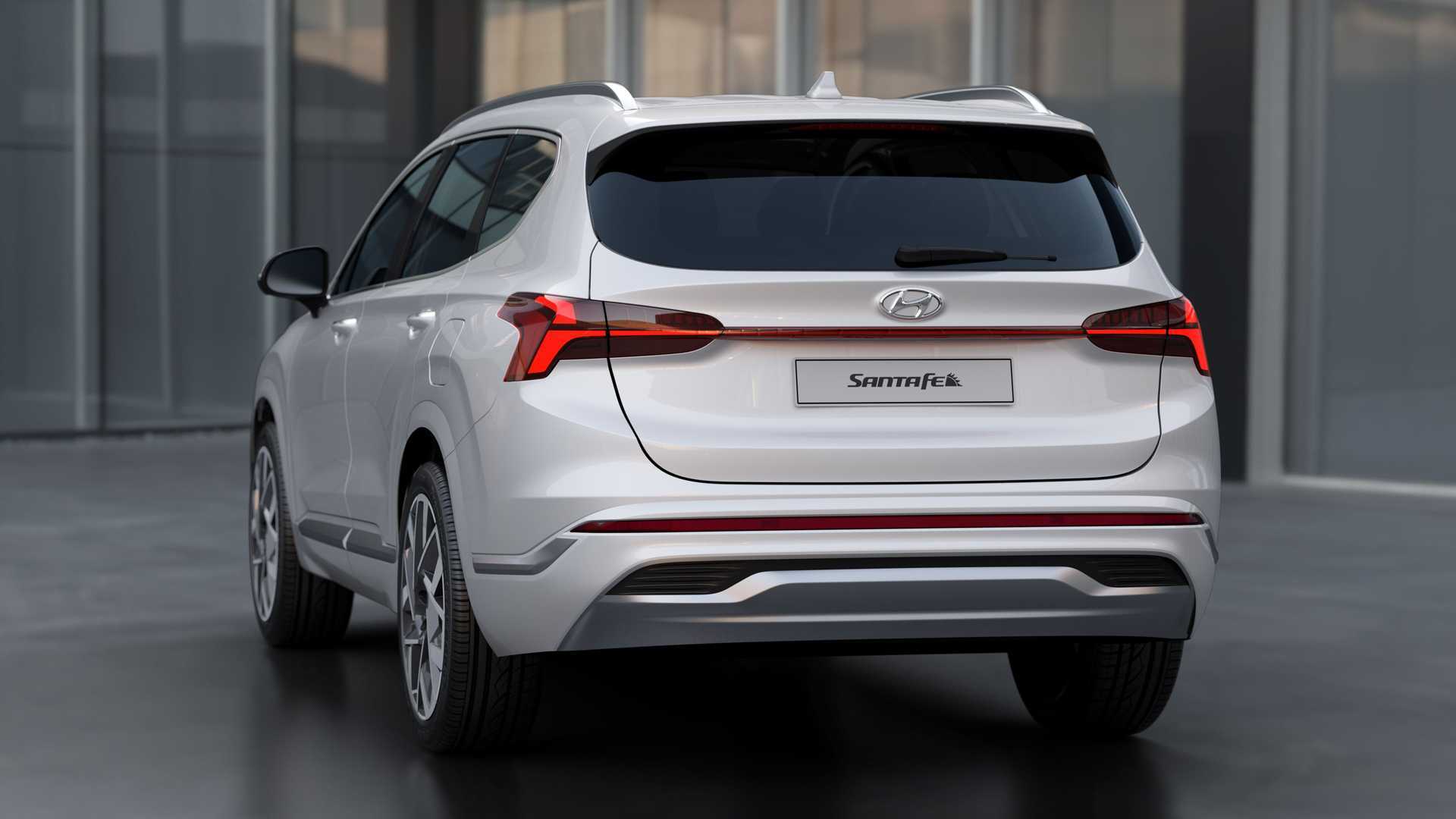 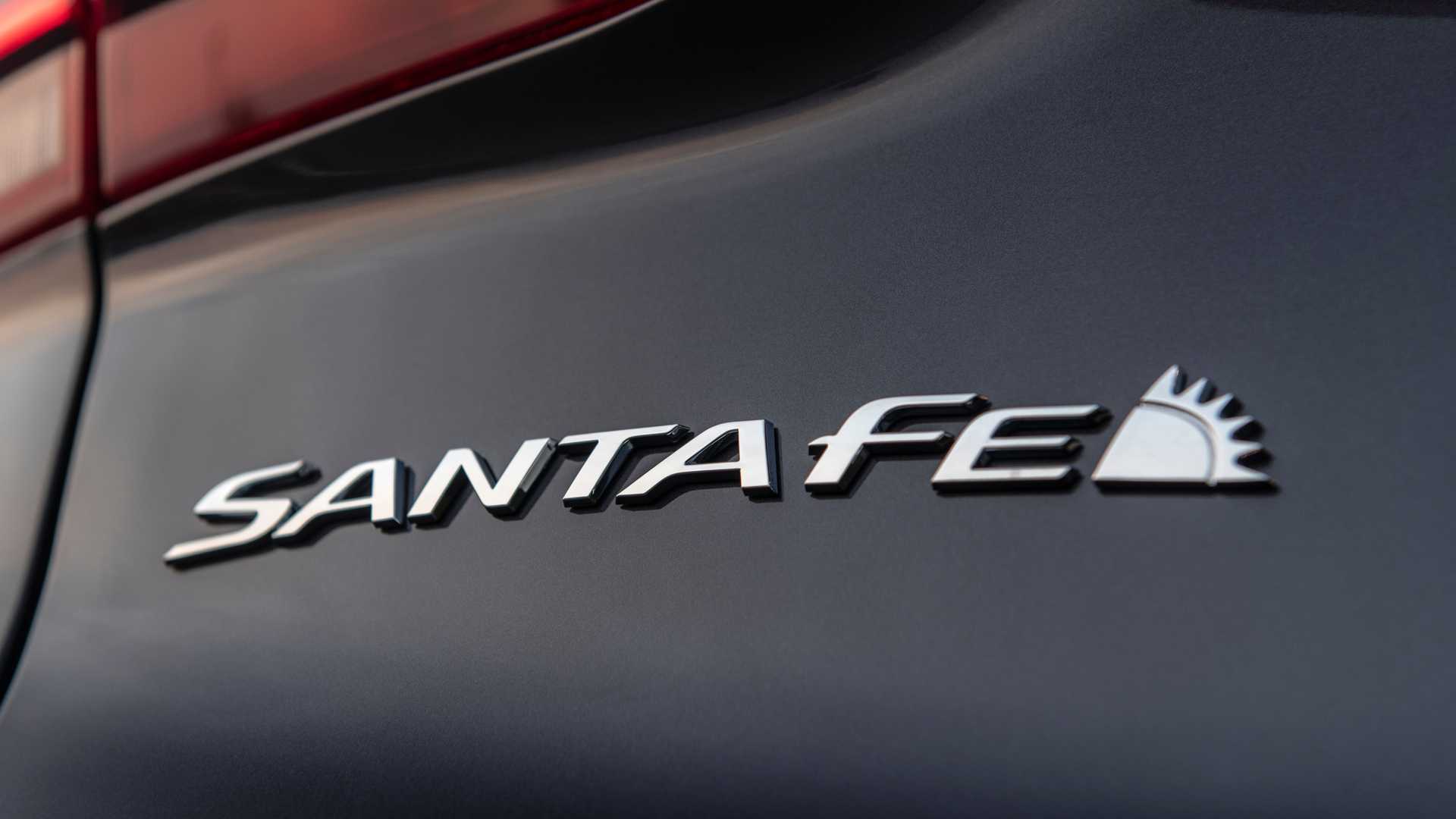 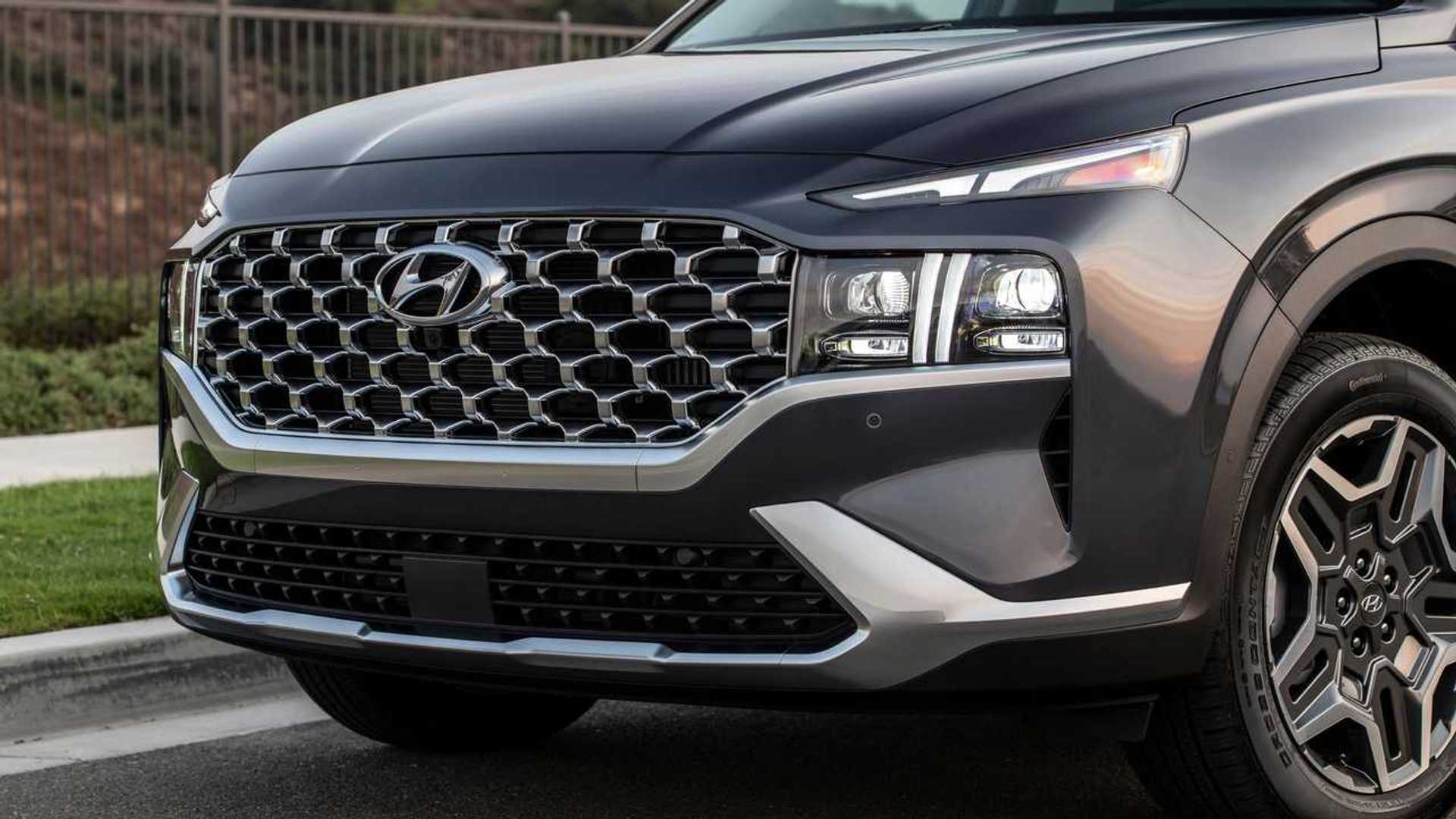 More significant is the 2.5-liter turbocharged inline-four found as an option on some trims of the Santa Fe. It boasts 277 hp and 311 lb-ft (207 kW and 422 Nm), vast improvements over the outgoing turbo 2.0’s 235 hp and 260 lb-ft (175 kW and 352 Nm). What’s more, the new engine comes with an eight-speed wet dual-clutch transmission, which offers reduced parasitic losses and better shift response versus the outgoing eight-speed auto. While the outgoing turbo engine occasionally felt flat-footed in sporty driving, this new one should be rather enjoyable.

The 2021 Santa Fe will also be Hyundai’s first-ever hybrid SUV. The Santa Fe Hybrid will take its motive force from a 1.6-liter turbocharged inline-four, a 13-kW starter-generator, and a 44-kW electric motor (itself taking charge via a small 1.5-kilowatt-hour battery). Combined power output will be 225 hp (168 kW) and 195 lb-ft (264 Nm), routed to standard all-wheel drive via a hybrid-optimized six-speed automatic. Efficiency numbers are still unconfirmed, but we wouldn’t be surprised to see 35 mpg combined based on 2020 Sonata Hybrid numbers

Hyundai is very comfortable with the idea that its distinct model lines don’t necessarily look similar, which is why the Santa Fe and the recently revealed 2022 Tucson feature decidedly unique styling. Hyundai seems to be moving away from the bold, shield-style front end styling seen on the outgoing Santa Fe and the current Palisade – instead, the new SUV’s wider front grille incorporates the headlights within its texture. A wing-shaped piece of chrome trim underlines the grille opening, with pointy daytime running lights mounted up high near the hood. Those LED lighting accents form a unique T-shaped styling element when combined with the headlights.

Styling changes around the rear are less obvious. The taillights are sharper, with swoopy LED accents and a full-width LED light bar replacing a piece of chrome trim on the tailgate. The outgoing Santa Fe’s separate turn signals have been relocated to the taillights themselves, with a wide, red reflector running the width of the bumper, which also gets a revised shape for the satin silver faux skid plate. A new, 20-inch wheel design appears on the top-spec Calligraphy trim, styled to ape the rollers on the flagship Palisade model with the same name.

The interior of the 2021 Hyundai Santa Fe gets several new improvements, chief among them larger standard and optional infotainment displays. An 8.0-inch touchscreen is now the base display (up from 7.0 inches), while a 10.3-inch screen is optional (up from 8.0 inches). Also available is a 12.3-inch digital instrument cluster. Hyundai Digital Key, Highway Drive Assist semi-autonomous technology, wireless charging, and wireless Apple CarPlay and Android Auto make their first appearance in the Santa Fe as well.

A higher console (seemingly borrowed from the Palisade) imparts a more premium appearance to the 2021 Santa Fe, while also opening up space for storage under the “floating” center stack. A switch to shift-by-wire controls also makes way for a corporate pushbutton gear selector that opens up even more room relative to the outgoing conventional shifter. The Santa Fe also adds another 0.5-cubic-foot of cargo volume, thanks to some clever packaging.

The Calligraphy trim, which debuted on the 2021 Palisade, also appears on the Santa Fe. As on the larger SUV, the Santa Fe Calligraphy features higher-grade Nappa quilted leather, a revised front grille, premium door and seat accent trim, an eco-suede headliner, and added feature content. In this case, that means a full-color head-up display, expanded ambient lighting, auto up/down rear windows, and exclusive 20-inch wheels. The Calligraphy is based on the highest Santa Fe configuration, entailing the 2.5-liter turbo and all-wheel drive.

The 2021 Hyundai Santa Fe features expanded use of high-tensile steels in its body structure, which the company says cuts weight while improving both ride and handling. A higher-capacity brake booster and larger (by an unconfirmed amount) brake rotors improve stopping performance as well. Redesigned instrument panel insulation reduces engine noise, and new undercovers for the subframe, engine compartment, and cabin floors cut the coefficient of drag from 0.34 to 0.33. If they’re as significant as Hyundai claims, the already-pleasant Santa Fe should be even smoother and stabler than before.

The non-hybrid 2021 Hyundai Santa Fe will once again be built at the company’s Alabama manufacturing facility, arriving at dealers by the end of the year. The Santa Fe Hybrid will be built in Ulsan, South Korea, with deliveries beginning in the first quarter of 2021. A plug-in hybrid model will follow sometime next year. Pricing hasn’t been announced, but expect an incremental increase from the 2020 Santa Fe’s $26,275 starting price – meanwhile, a maxed-out 2021 Santa Fe Calligraphy should demand at least $42,000 all-in.