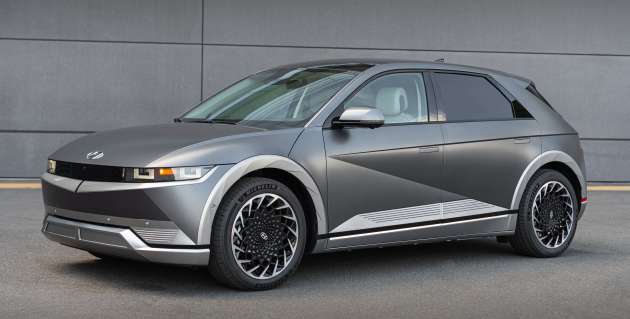 Hyundai-Sime Darby Motors (HSDM) has officially announced that the Ioniq 5 is open for booking. The Korean carmaker’s current flagship EV is the second battery-powered car launched in Malaysia in recent times by HSDM, following the debut of the Kona Electric in November 2021.

“The Kona Electric introduced last year was a resounding success with the first batch of vehicles sold out. We expect demand for the Ioniq 5 to surpass the demand for the Kona Electric. Given how well received Hyundai-brand electric vehicles are here, we have lined up more electric models for our discerning customers,” said Jeffrey Gan, MD of retail and distribution at Sime Darby Motors Malaysia. He added that Hyundai is expected to lead the Malaysian EV segment as more models are expected to be rolled out over the next three years.

Unlike the B-segment crossover, which started life with internal combustion engines, the Ioniq 5 is a dedicated EV that’s built on Hyundai’s skateboard-like Electric-Global Modular Platform (E-GMP). It’s also the first model under the new Ioniq sub-brand for EVs, which will soon have a sedan and an SUV.

Announced in February 2021, the Ioniq 5 is a faithful adaptation of the Hyundai 45 Concept from Frankfurt 2019, which was in turn inspired by the 1974 Hyundai Pony Coupe Concept penned by one Giorgetto Giugiaro, hence the retro-modern look dominated by straight lines and sharp edges.

Seen the ‘Z’ on the profile before? It’s the “Parametric Dynamics” style seen on the latest Elantra. The Tetris-style “Parametric Pixel” tail lamps – also found on the Staria’s twin towers – are very cool too (repeated on the charging indicator), as are the flush door handles.

As reported yesterday, the Ioniq 5 will be offered here with two battery options – 58 kWh and 72.6 kWh. The smaller capacity battery will have a 215 hp/350 Nm (160 kW) rear motor driving the rear wheels (RWD), while the 72.6 kWh battery is connected to two motors for all-wheel drive.

Uniquely, the Ioniq 5 is able to directly support both 400 V and 800 V through boosting the car’s electric motor and inverter, rather than using a separate built-in charger. With a 350 kW DC fast charger, users can juice the battery from 10 to 80% in just 18 minutes, and even just five minutes of plugging in will be able to net an extra 100 km of WLTP-rated range.

We don’t have such powerful chargers yet, but it’s good to know that the Ioniq is capable of faster charging when the hardware arrives. Current DC fast chargers such as those on the Shell Recharge network are rated at 180 kW. At 50 kW, Hyundai says that the 72.6 kWh Ioniq 5 will replenish to 80% in around 62 minutes, so expect much shorter waiting times at 180 kW DC chargers, even if it’s shared with another EV. Juicing up with the onboard AC charger takes six hours and six minutes at 10.5 kW max. As usual for Hyundai, the Ioniq 5 has a CCS2 port. 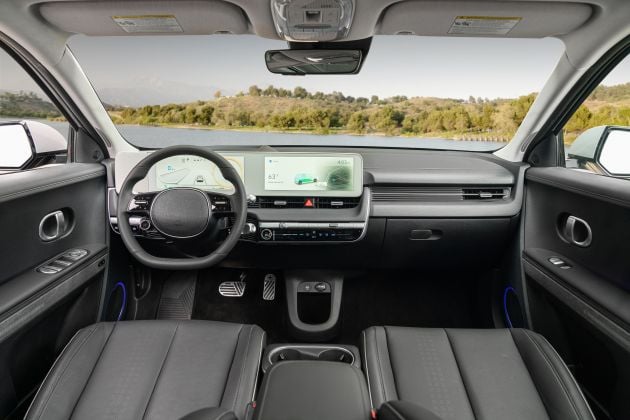 By the way, vehicle-to-load (V2L) sockets under the rear seats can supply up to 3.6 kW to power things like electric bicycles, scooters and camping equipment, so this big car is also a big powerbank.

Big car? While in isolation, the Ioniq 5 it looks like a Golf-sized hatchback, the scale is much larger. At 4,635 mm long and 1,890 mm wide, it’s 430 mm longer and 90 mm wider than the Kona Electric, and the three-metre wheelbase is 400 mm lengthier than the Kona’s. Never mind the Kona, this car’s wheelbase is actually longer than that of a Toyota Camry (2,825 mm) and Mercedes-Benz E-Class (2,939 mm). Those elaborate aero-optimised wheels are 20-inch items, by the way.

HSDM’s press release doesn’t elaborate, but we understand that there will be three variants of the Ioniq 5, with Lite, Plus and Max names like the Kona Electric. Obviously, the Lite is the 58 kWh car and the Max the 72.6 kWh range topper. We’re guessing that the Plus is a higher spec 58 kWh variant, as per the Kona Electric range.

While HSDM has opened order books for the Ioniq 5 and you can put your name down for RM1,000, the announcement did not come with an estimated price. Our guess is that the company’s flagship EV will cost a fair bit more than the Kona Electric, which has a tax-free price range of RM150k (39.2 kWh) to RM200k (64 kWh). In Australia, where the Ioniq 5 sold out in two hours, the range-topping 72.6 kWh AWD goes for A$75,900, which is RM229k.

So, RM200k to RM250k in Malaysia? The launch should be happening this month – stay tuned.