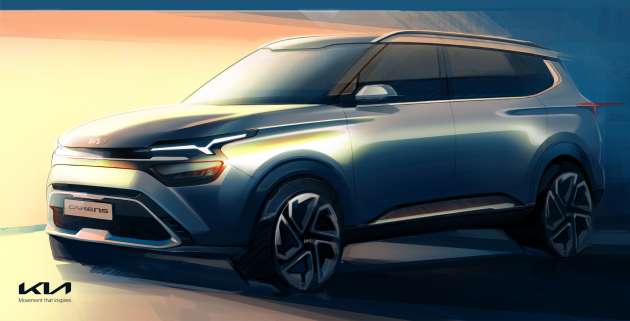 Kia has shown the upcoming Carens in a series of official sketch images ahead of its debut in Gurugram, India on December 16. In contrast to outgoing generation that was a compact MPV, this is a three-row SUV designed for the Indian market, in the vein of the Hyundai Alcazar.

In addition to the previous teaser, the Carens now shows its LED headlamps and daytime running lights, as well as its iteration of the carmaker’s Tiger Face front-end design. No measurements so far, though for reference, the Alcazar is 4,500 mm long with a 2,760 mm wheelbase, 1,790 mm wide and 1,675 mm tall.

Technical specifications for the 2022 Carens remains undisclosed, though this is likely drawn from the Alcazar and thus could use that model’s 2.0 litre naturally aspirated inline-four petrol which produces 159 PS and 191 Nm of torque, as well as a 1.5 litre turbodiesel that makes 115 PS and 250 Nm of torque. The Alcazar gets a choice of six-speed manual and automatic transmissions.

Inside, the Carens interior has been designed to meet the lifestyle needs and daily usage preferences of its target market in India, says Kia, and here the wraparound dashboard employs a continuous arc across the width of the vehicle’s interior.

Inside, infotainment is provided by a 10.25-inch Audio Video Navigation Telematics (AVNT) display in the centre of the dashboard, which is the same size as the unit found in the Hyundai Alcazar. No mention was made regarding driver instrumentation, though as a reference, the higher trim variants of the Alcazar features digital instrument cluster also measuring 10.25 inches across.

“The Kia Carens is a true reflection of what today’s customers want from their three-row vehicles,” said Kia Design Center chief Karim Habib. What do you think of its latest form compared to the previous-generation MPV?