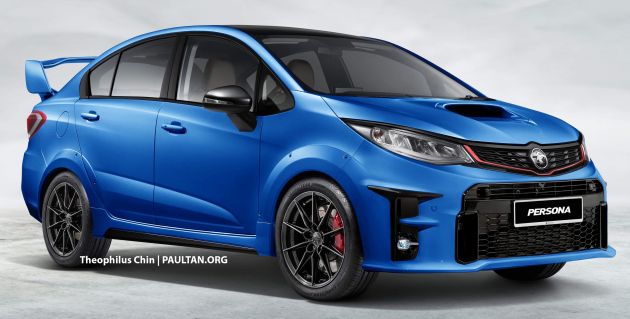 The Proton Persona got its second facelift earlier this month, with notable changes to the exterior and list of equipment, joined by a streamlined variant line-up. Unlike its hatchback sibling, the B-segment sedan doesn’t get a new standout variant like the Iriz Active that is very distinctive from the others, but what if it did?

Well, rendering wiz Theophilus Chin thought it would be a good idea to create just such a vehicle in the virtual world, and the result is a sporty take on the Persona. The base car is obviously here, but as you can tell from the front, he grafted on the bumper from a Toyota GR Yaris for a more aggressive front fascia.

Accompanying the new face is a prominent bonnet scoop, while the flared fenders are adapted from the Iriz Active, albeit in body colour as seen in earlier renders. The latter is joined by lowered ride height as well as wheels and brakes lifted from Toyota’s hot hatch.

At the rear, a large rear wing, which looks like it came from a Subaru WRX STI, has grown out of the boot lid, while further down, the GR Yaris lends its dual exhaust tailpipes that flank a diffuser element. To complete the look, several areas like the front grille frame, side mirrors, headlamps, taillights, rocker panels and boot trim are finished in black, including the roof.

So, what do you think of these renders created by Theo? What would you change about it? Let us know your thoughts in the comments below.