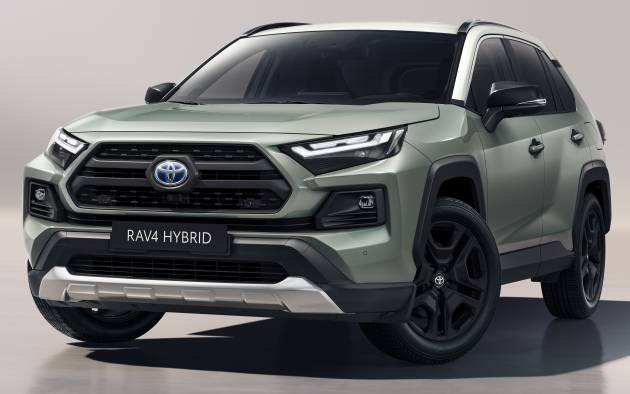 Toyota has released the first images of the 2022 RAV4, which benefits from a number of cosmetic and functional updates. The changes were detailed by the carmaker’s Australian arm back in June, but this is the first time we’re seeing them visually.

By far the most visible of these revisions are the redesigned LED projector headlights, with the projector units positioned in the bottom half – freeing up space above it for new U-shaped daytime running lights. These are now standard in Europe (replacing the base reflector units we get), as are LED fog lights.

Elsewhere, there are new ten-spoke alloy wheels finished in either silver or black, while LED lighting, a power-adjustable passenger seat (the driver’s seat is already powered), illuminated window switches and USB Type C ports have been added on the inside. The European market also receives the more rugged Adventure model already offered in North America, Japan and Australia (it’s called the Edge in the latter).

This adds a different front bumper with a larger hexagonal grille (the Toyota badge is placed in the centre here) framed by a U-shaped centre intake and fog light surrounds, plus a beefier silver skid plate. There are also wider fender flares, unique 19-inch alloy wheels (finished in full matte grey for the European market) and an exclusive two-tone colour scheme that pairs an Urban Khaki body with a Dynamic Grey roof.

Inside, the Adventure is set apart with black faux leather upholstery with contrasting orange stitching and quilted back and cushion sections, along with “RAV4 Adventure” scuff plates. In Europe, the RAV4 is offered solely in Hybrid form, pairing a 2.5 litre Atkinson-cycle four-cylinder engine with an electric motor for a total system output of 218 PS (225 PS with an additional rear motor and all-wheel drive).

A sportier Plug-in Hybrid variant is also available, pushing outputs to 306 PS and delivering an electric-only range of 75 km through an 18.1 kWh lithium-ion battery. The refreshed RAV4 range will go on sale in Europe starting in the first quarter of next year.