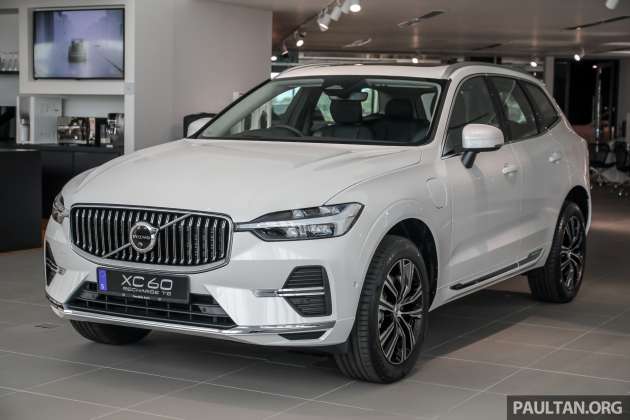 Aside from the XC90 and XC40, Volvo Car Malaysia has also brought some changes to the XC60, following the announcement of a comprehensive powertrain upgrade for Gothenburg’s plug-in hybrid models. This revision comes halfway through the 2022 model year (and is separate from the more substantial 2023 refresh, unlike was what assumed previously) and largely maintains the same specs as before.

What has changed is under the floor, where the Recharge T8 in particular receives a third layer of battery cells, increasing capacity from 11.6 kWh to 18.8 kWh. This provides a sizeable jump in pure electric range, which has nearly doubled from 45 km to an impressive 81 km. With the bigger battery comes a more powerful electric motor, which drives the rear wheels and pushes out an extra 58 PS at 145 PS.

The front-drive 2.0 litre turbo- and supercharged four-cylinder petrol engine has also been retuned to deliver more power at lower revs and from take-off for a more refined drive; it now produces 317 PS and 400 Nm of torque. As before, a separate integrated starter generator (ISG) sits between the mill and the eight-speed Aisin automatic gearbox to start the four-pot and deliver extra performance under acceleration.

All in all, the Recharge T8 sends 462 PS and 709 Nm to all four wheels, enabling it to rocket from zero to 100 km/h in just 4.8 seconds – half a second quicker than before. The increased range has also cut the claimed combined fuel consumption figure from 2.2 to only 1.6 litres per 100 km.

The upgrades are accompanied by a price jump of more than RM6,000 to RM331,781 on-the-road without insurance, which is still a lower increase than the XC90 with a similar revamp. Notably, the mild hybrid B5 Momentum is also around RM5,000 more expensive at RM297,056, so the new powertrain was not the sole cause of the change. These figures, by the way, include the sales and service tax (SST) exemption that expired at the end of next month, and will rise to RM353,888 and RM318,888 respectively after that.

Beyond that, the equipment is very nearly identical to the outgoing model, which debuted a redesigned front bumper as part of a mild facelift. The car continues to come in range-topping Inscription trim, fitted with adaptive LED headlights, chrome exterior trim and 19-inch ten-spoke two-tone alloy wheels.

Inside, the updated Recharge T8 gets the same Android operating system as before, incorporating Google services. It still functions out of a nine-inch portrait touchscreen and lacks Apple CarPlay compatibility, although you do receive a 15-speaker, 1,100-watt Bowers & Wilkins sound system as compensation. Leather upholstery covers the seats and dashboard, paired with either Iron Ore or Driftwood trim.