Skoda introduced the all-new Slavia in India back in November 2021 and now Volkswagen is following suit with the equivalent Virtus. The second-generation sedan rides on the same MQB-A0-IN platform as its sister model, with the underpinnings adapted by Skoda for India and other emerging markets. It shouldn’t come as a surprise the two share the exact same wheelbase of 2,651 millimeters (104.3 inches).

At 4,561 mm (179.5 in) long and 1,507 mm (59.3 in) tall, the new Virtus is slightly longer and taller than the equivalent Slavia while having an identical width of 1,752 mm (69 in). The two compact sedans also share the 521-liter trunk as well as most of the interior cabin. Replacing the aging Vento in India, VW’s latest sedan does have different front and rear fascias than the Skoda, but the side profile gives away its true identity. 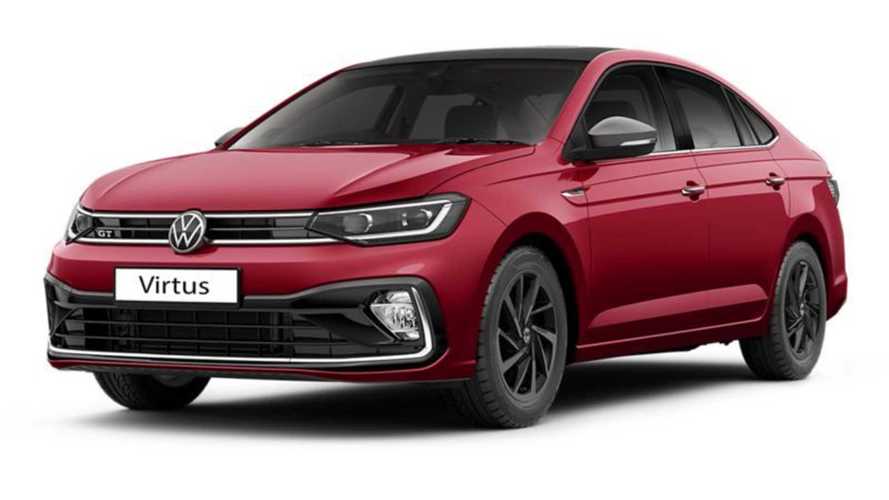 The easiest way to describe these cars is by thinking of a Fabia or Polo sedan that will be sold in over 25 countries. Some will be disappointed to hear we won’t be seeing either of the two in Europe to go after the Dacia Logan, one of the last budget small sedans on sale. Skoda does sell a Rapid sedan on the Old Continent, but it’s exclusively available in Russia.

VW India will sell the 2022 Virtus in the Dynamic Line flavor with the familiar 1.0 TSI engine and a more potent Performance Line equipped with the bigger 1.5-liter unit featuring cylinder deactivation tech. The three-pot mill is good for 115 hp and 175 Newton-meters (129 pound-feet) while the four-cylinder engine is rated at 150 hp and 250 Nm (184 lb-ft). Needless to say, the Slavia has the same powertrains.

Stick with the base engine and you get to pick from either a standard six-speed manual or an optional torque-convertor automatic with the same number of gears. The larger of the two engines can also be had with a clutch pedal or a seven-speed DSG at an additional cost. You’ll find these setups in the Kushaq and Taigun small crossovers.

There’s also going to be a Virtus GT serving as the range-topping model with all the bells and whistles, plus red accents and aluminum pedals to mimic the GTI models. It’s nicely equipped with ventilated front seats, wireless smartphone charging, an eight-inch digital instrument cluster, and automatic headlights. The flagship also gets automatic climate control, a sunroof, auto wipers and headlights, along with ambient lighting and an eight-speaker sound system.

VW India is already accepting preorders in India where it will have the Virtus on sale from May.