After unveiling the compact Tonale crossover a month ago, Alfa Romeo is now turning its attention towards the company’s original SUV – the Stelvio. It has been around for about five years, but rather than switching to a second generation, the Giorgio-based vehicle is about to get a mild facelift. Several prototypes were spotted in Italy resting on a trailer together with the mechanically related Giulia sedan. What do the two have in common?

Aside from the same paint job and black wheel design, the prototypes caught by Walter Vayr are flaunting an “Estremo” badge on the front fenders. Italian for “Extreme,” the dark logo likely denotes a special edition Alfa Romeo is preparing for the dynamic duo. It doesn’t appear to be based on the range-topping Quadrifoglio trim, but rather on the warm Veloce variant. 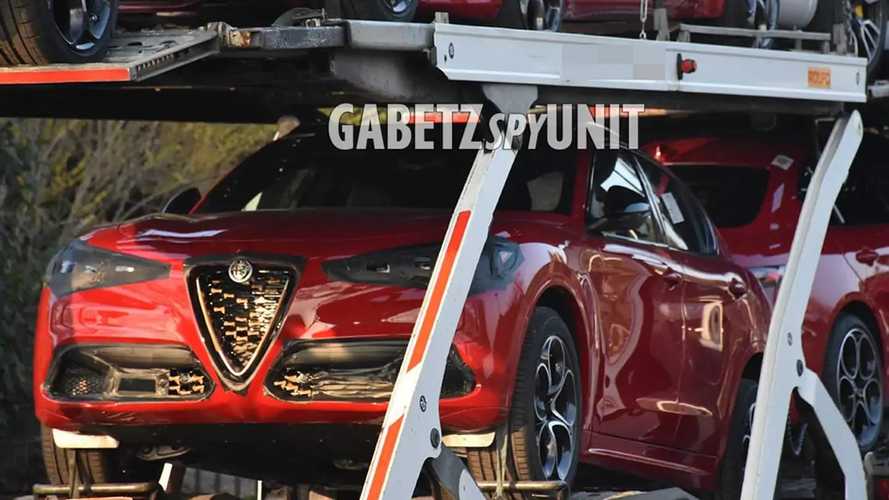 In the case of the Stelvio, the SUV was hiding its updated headlights under black tape, which was also used to partially cover the front bumper. Speaking of which, that body panel appears to be an evolution of the Veloce’s bumper and likely foretells the cosmetic tweaks Alfa Romeo is preparing for the MCA (mid-cycle action). The rear bumper also gives us the impression Estremo will be based on the Stelvio Veloce.

Since we’re at the back, the Q4 badge on the tailgate denotes the test vehicles we’re looking at had all-wheel drive. The taillights appear to be the same as before unless those are stickers to conceal the real design or Alfa Romeo simply put the pre-facelift’s lighting clusters on these prototypes. In some of the spy shots, you can see the sedan and SUV were spied next to a Maserati Grecale, which will finally debut a week from tomorrow, on March 22.

For obvious reasons, there are no spy shots of the interior in this set. However, chances are both the Stelvio and Giulia will be getting a fully digital instrument cluster. Since the cheaper Tonale has one, it makes sense for Alfa Romeo’s other two models to lose the analog dials.

Come 2024, the lineup will expand to include a third crossover, tentatively called Brennero. It will become the company’s first-ever EV, but will still offer combustion engines. In 2025, Alfa Romeo will launch its first electric-only model before ending sales of ICE-powered cars in 2027.