The loveable Mini will be switching to the fifth generation for 2023, and in the meantime, the BMW-owned company has taken prototypes to Sweden. The camouflaged test vehicle represents the fully electric model joined in Lapland by its four predecessors to indirectly show the jump in growth. Once again, the three-door body style will be the first to come out, and there are still going to be combustion engines to choose from.

Dressed in Mini’s typical yellow camo, the prototype was taken to the BMW Group’s winter test center in the Swedish Lapland for evaluations at temperatures well below freezing. Aside from snow-covered roads, there are purpose-built areas on frozen lakes where test vehicles undergo various procedures. The main goal is to perfect the chassis and steering before kicking off series production. 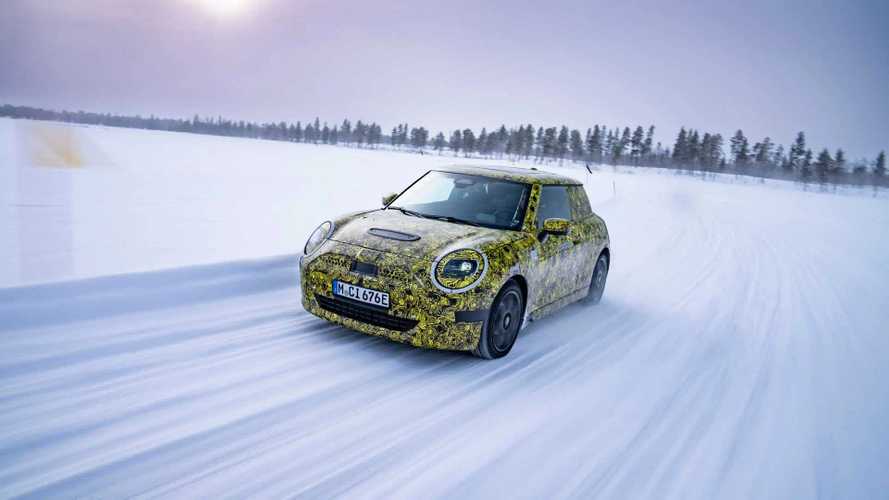 Mini reassures fans of the British brand the next-gen car will retain the go-kart feeling while those in need of a more practical car will get a much bigger Countryman. Indeed, the crossover will blossom into a fully fledged compact car due to be built in Leipzig, Germany alongside its sister model, the 2023 BMW X1.

Interestingly, a “concept study of a crossover model for the premium small car segment” will be unveiled this year. Chances are Mini is not referring to the Countryman since it uses the word “compact” to describe its largest vehicle. We think the company is talking about a separate model, potentially the rumored Paceman (or is it Aceman?).

For the time being, Mini remains tight-lipped about its next-generation 3-Door model. However, Autocar had the chance to hop on board a development prototype and the British magazine confirms the leaked images were legit. We get to learn the car will gain wider tracks, a stretched wheelbase, and bigger wheels.

Inside, it’ll take after the Strip concept with a “less is more” approach featuring a huge round display. The touchscreen is not only for the infotainment but also for most of the climate controls while acting as the digital driver’s display as well. Behind the steering wheel, there’s now only a head-up display. You still get a few physical controls, located below the big screen, for quick access to choose between drive modes and an on/off button.

The British journalists claim the new Mini 3-Door is a tad quieter than before and has a less bouncy suspension. An improved electric power steering is on the menu, as is a next-gen traction control system that acts quicker and reduces understeer.

Although teased today, the new Mini won’t be going on sale until the latter half of 2023.