When Nissan first announced that they would soon be bringing an all-electric crossover to market, there weren’t any such vehicles available for sale in North America. That was back in 2019, and a few months later Tesla began production of the Model Y, which has become its most popular model to date.

In addition to the Model Y, the Ariya will undoubtedly be crossed-shopped with the Volkswagen ID.4, the Ford Mustang Mach-E, the Hyundai Ioniq 5, and the Kia EV6, all very good electric vehicles in their own right. Therefore, we set out on this first-drive event with the goal of trying to determine exactly where the Ariya fits in.

Nissan provided InsideEVs with travel and accommodations for our two-day trip to Madrid, Spain, for the first look and initial driving impressions event. We had the opportunity to take a front-wheel-drive pre-production Ariya with the 66 kWh battery pack around the Circuito del Jarama, a racetrack in Madrid for a few laps.

The track was set up with a variety of sections established to simulate different driving conditions. We would have loved the opportunity to get an all-wheel-drive Ariya with the larger 91 kWh battery pack and Nissan’s e-4ORCE technology out on the track, but alas, those vehicles aren’t ready for outside testing just yet.

The AWD Ariya with e-4ORCE will arrive in dealerships in late fall, a couple of months after the FWD version launches. Nissan did bring an e-4ORCE test mule in the body of a LEAF to the event and allowed us to take a ride (not drive) to show us the difference the e-Force system makes. 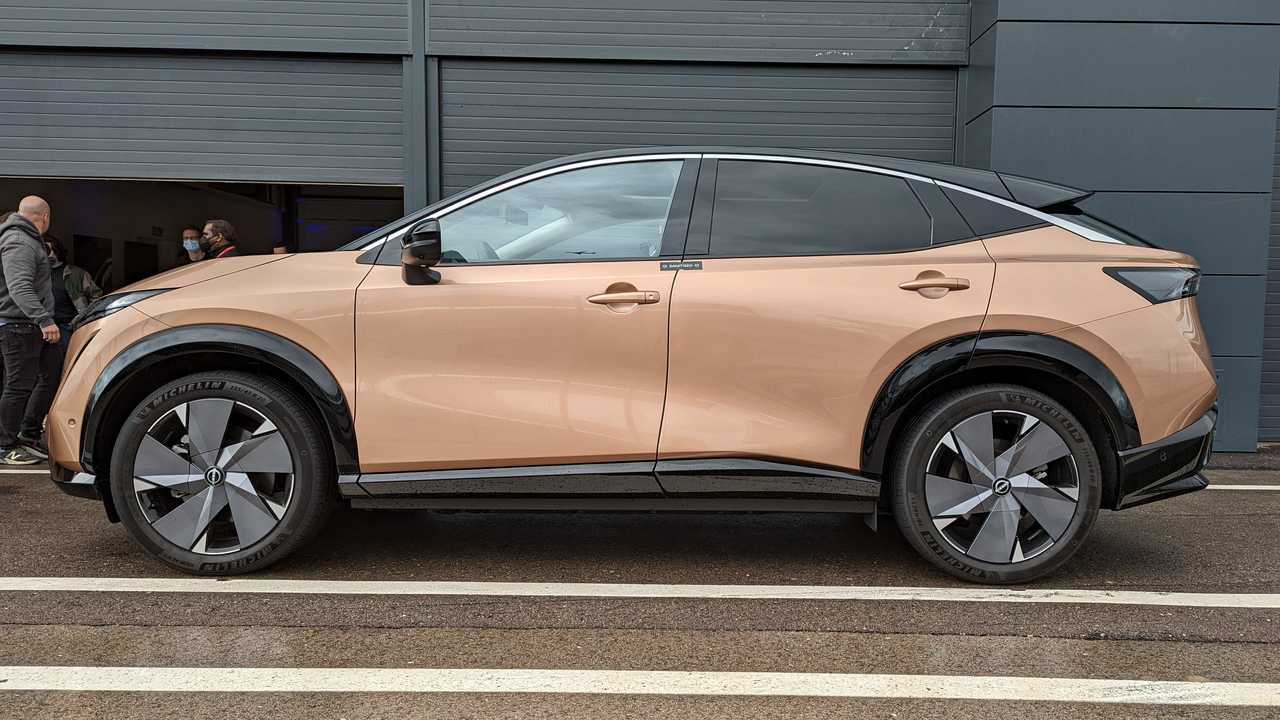 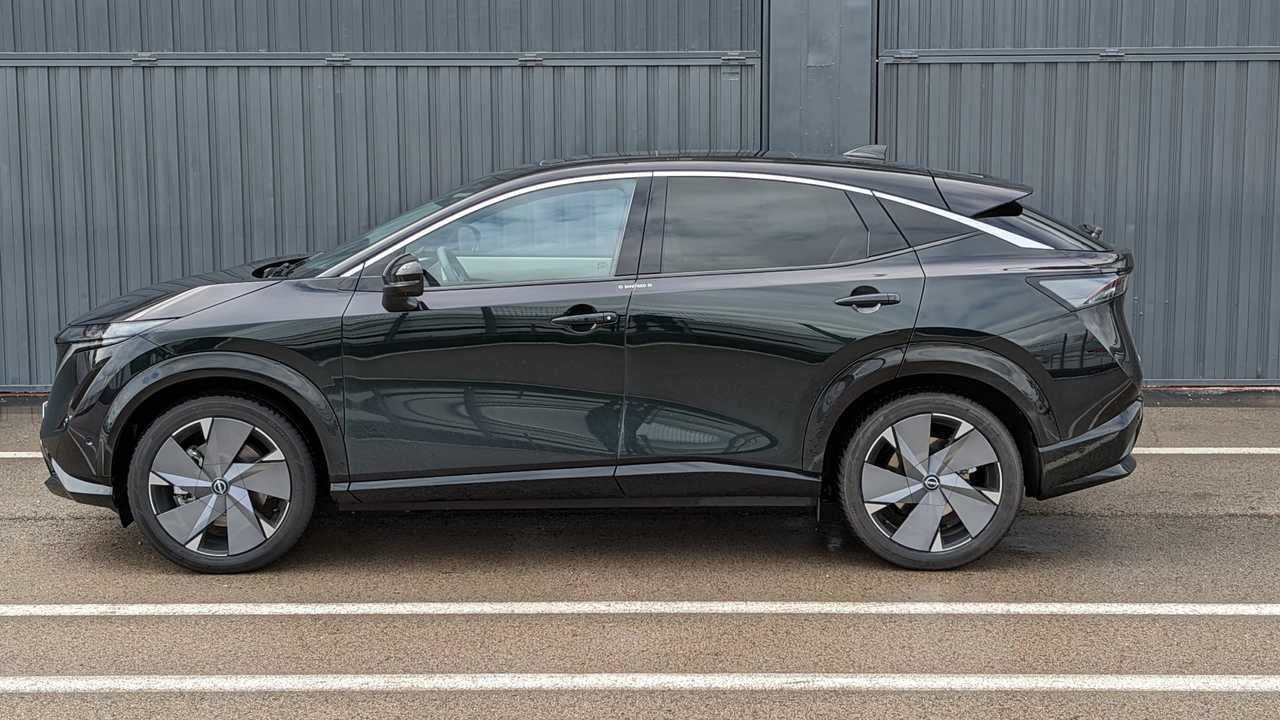 There was a surprisingly little understeer when I pushed the Ariya hard in the turns, even though it is heavy, (slightly over 4,000lbs) FWD, and the surfaces were slick. I doubt the typical Ariya owner will find themselves analyzing the performance at its limit, though. That might be more of a concern for Mustang Mach-E, KIA EV6, and Tesla Model Y owners, as those competing crossovers are more sport-oriented than the Ariya.

The Ariya has three driving modes; Sport, Standard, and Eco, each of which has an influence on the strength and behavior of the regenerative braking system and also a distinctive driving feel and pedal response. 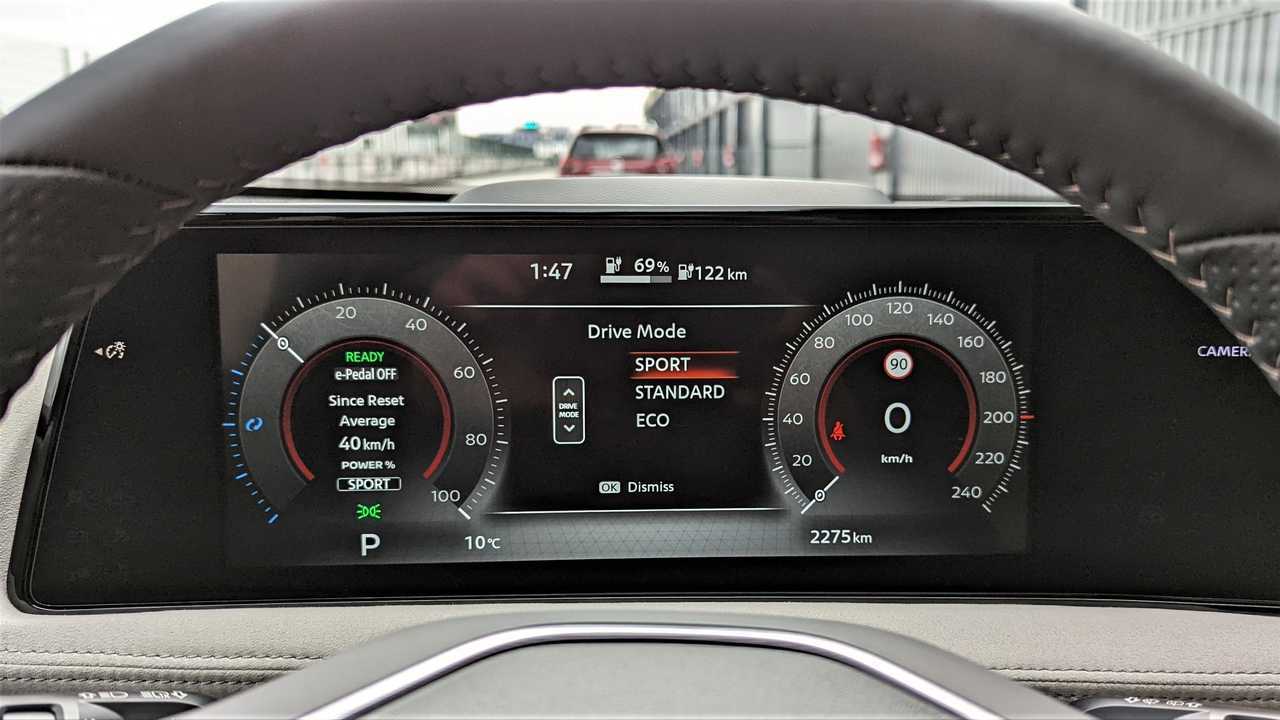 May The e-4ORCE Be With You

I was a little surprised to learn that Nissan has changed up the regenerative braking and unlike the LEAF, the Ariya doesn’t offer one-pedal driving, even with E-Pedal driving mode selected. The more aggressive E-Pedal mode will bring the Ariya down to about 6 mph rather quickly, but no further. The driver needs to use the friction brakes to come to a full stop.

In our opinion, it would have been a good idea to have true one-pedal driving selectable in the vehicle settings, so those that like it can have it. Many experienced EV owners really love one-pedal driving dynamics, even though some new to EVs initially find it unusual.

Nissan is clearly trying to make the transition to electric drive as seamless as possible for those coming from conventionally-fueled vehicles. The lack of true one-pedal driving, as well as the e-4ORCE AWD system, are two prime examples of how they plan to achieve that. We suspect that it would be possible to add such a sitting via an OTA update, something the Ariya is capable of receiving if enough Ariya customers ask Nissan for it. 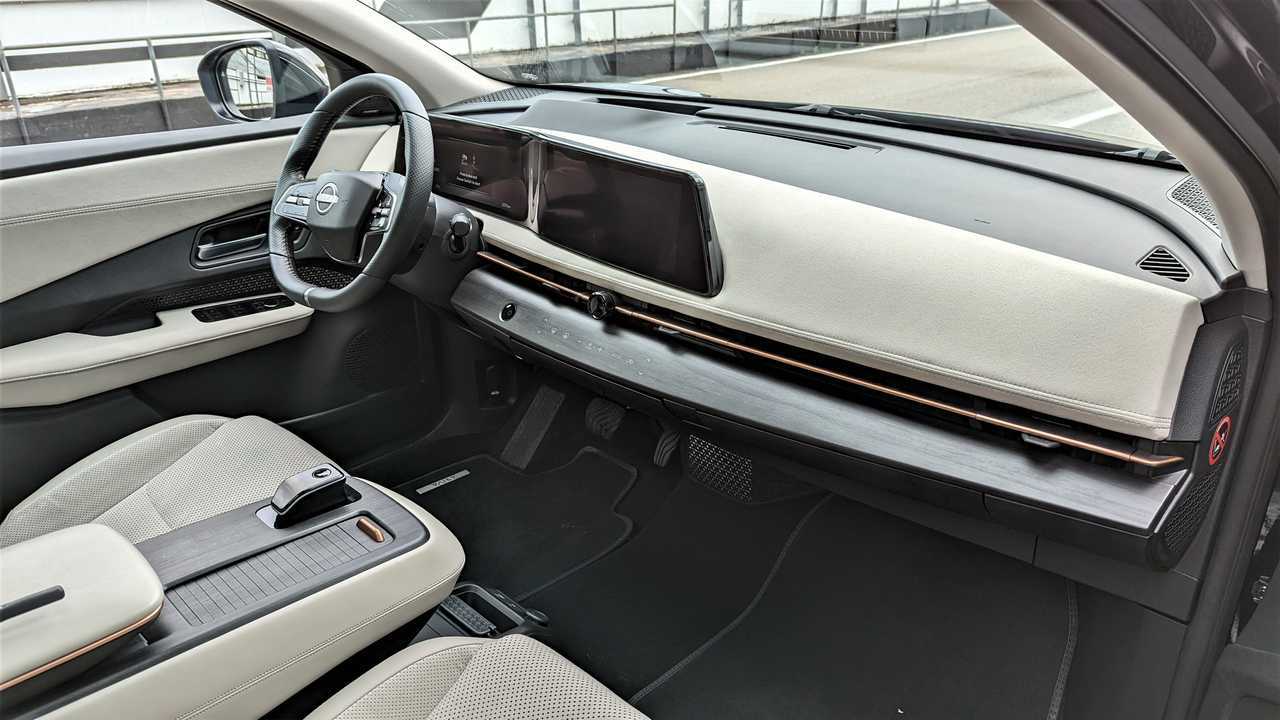 The Ariya’s battery pack options fare well in comparison to the other crossovers in its class. In fact, Ariya’s battery is larger than all of its competitors with the exception of the Ford Mustang Mach-E. The driving range will vary depending on the chosen powertrain configuration as well as which battery pack is fitted to the vehicle.

For North America and Europe, Nissan is transitioning from the CHAdeMO DC fast charge standard that they use in the LEAF, to the Combined Charging System (CCS or Combo) for the Ariya. The Ariya will join the LEAF and use CHAdeMO in Japan and will employ the Chinese standard in China. The LEAF will continue to use CHAdeMO, but if/when the next-generation LEAF goes into production, it too will transition to the CCS standard.

The Ariya can accept up to 130 kW when DC fast charging, which isn’t quite as high speed as some of the new EVs can charge at. However, we learned at the event that Nissan has been working on providing a “flat charging curve” for the Ariya, which means it will be able to hold its maximum charging rate deep into the pack. 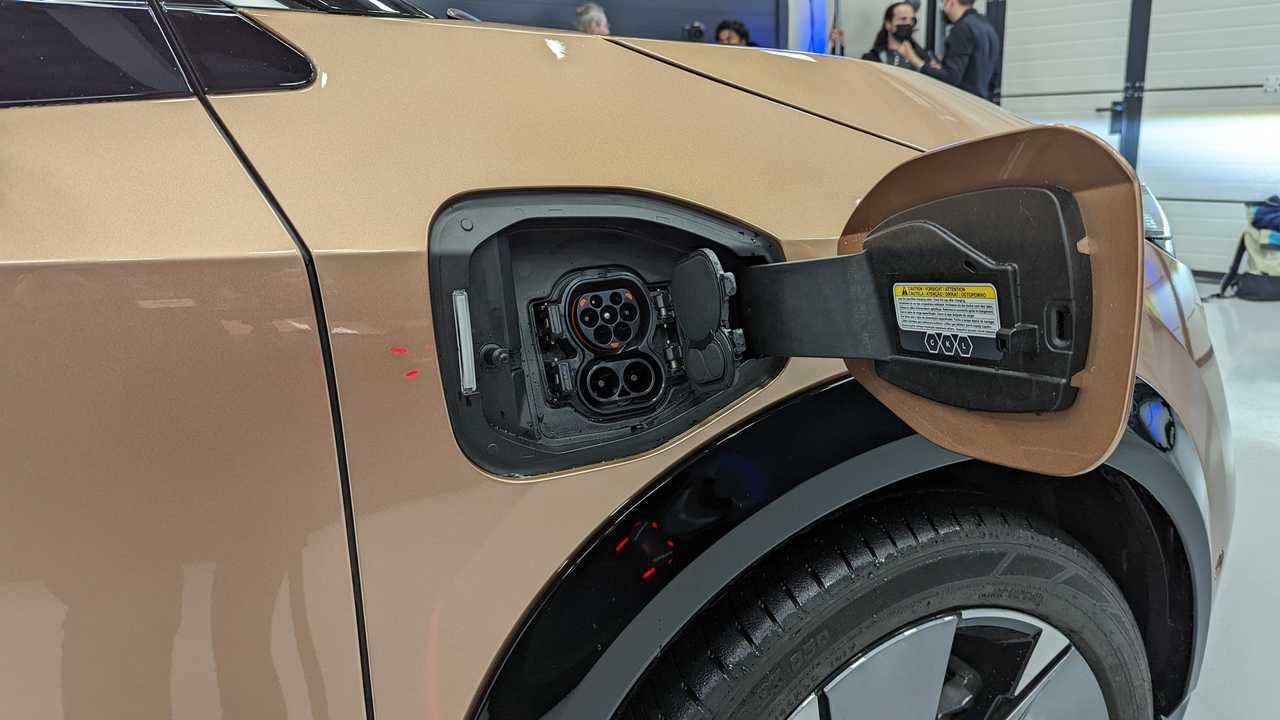 That’s good news for Ariya owners because the charging curve is just as important, perhaps more important, than the maximum charging rate an EV can accept. If Nissan is able to hold a relatively flat curve up to the 70% to 80% state of charge point, then the Ariya with the large battery pack will likely charge from 10% to 80% in about 35 minutes. That’s comparable with other EVs that have a higher maximum DC fast charge rate, but a charging curve that tapers down shortly after the charging session begins.

We wanted to test out the Ariya’s DC fast charging capabilities, and Nissan tried to arrange, but there weren’t any close enough to the track in Madrid to do so in the short time we had. Once we have more time with the Ariya in the coming months, we’ll document the full charging curve and compare it to the other EVs in this segment.

As for level 2 charging, the Ariya comes standard with a 40-amp (9.6 kW) onboard charger which should replenish about 30 miles of range to the Ariya for every hour of charging. The Ariya will come standard with the same dual-voltage (120-v / 240-v) portable charging cable as the LEAF Plus. 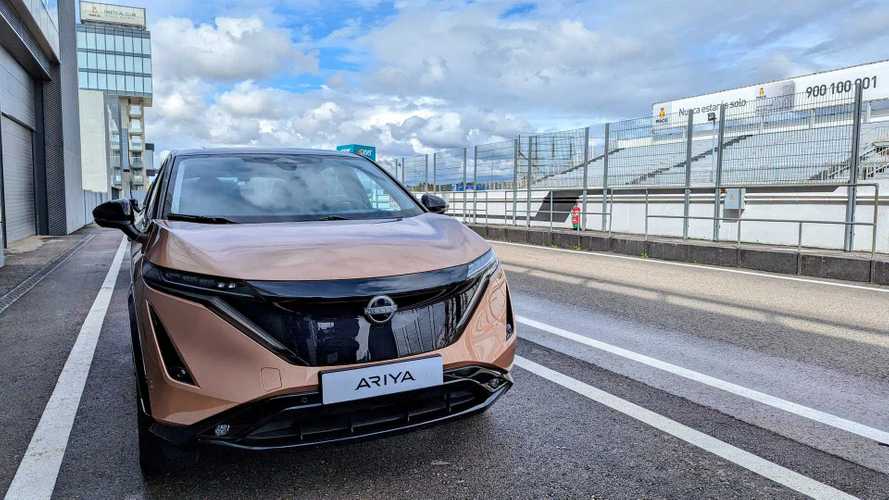 We found the Ariya’s interior to be one of its strongest aspects compared to its prime competitors. The EV dedicated CMF-EV platform allows for a completely flat floor and Nissan also moved the heating and cooling equipment as well as other modules usually located behind the dashboard forward into the traditional engine compartment.

In doing so the Ariya has more front passenger space and larger, more airy footwells. On the downside, by moving all that equipment upfront, there’s no room left over for any front storage space, therefore, there is no frunk. Nissan isn’t the only EV manufacturer to sacrifice a frunk so there could be more front passenger space. Cadillac (Lyriq) and BMW (iX & i4) both recently told us that was the reason their upcoming EVs don’t have a frunk, and Volkswagen also offered that explanation when the ID.4 first launched.

However, the Ariya boasts plenty of cargo space without a frunk. The rear seats fold almost completely flat and increase the 22.8 cubic feet of storage behind the rear seats to an impressive 59.7 cubic feet. 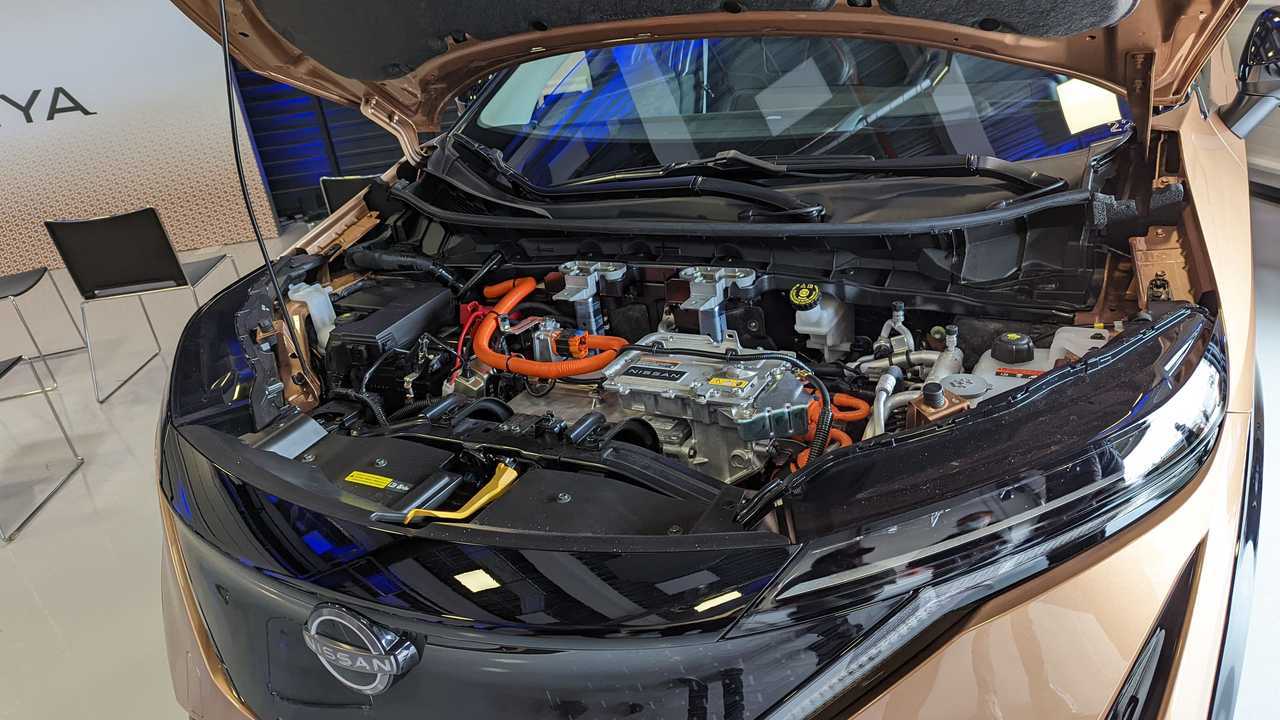 There is a good amount of hard plastics as we typically find in vehicles in this class and price range, but the Ariya seems to incorporate them better than the others. Personally, I didn’t mind the look and feel of the hard plastics in the Ariya as much as I did in the Hyundai Ioniq 5, for instance.

The minimalistic sweeping dash with simulated wood grain and flush haptic buttons for the climate control looks upscale, almost as if it should be in an Infinity rather than a Nissan. In fact, one of the other journalists actually said to me that he thought the Ariya felt more like an Infinity after the test drive.

One niggle I had with the front seating position was that the front seats don’t seem to lower far enough for tall passengers to have adequate headroom. I’m only 5’8″ and there was plenty of headroom for me, but even with the seat in its lowest position, I didn’t have as much headroom as I usually have or like to see. If you’re a 6’+ in height you should definitely sit in an Ariya and make sure you have enough headroom – but that should go without saying.

Actually, with all of these great choices in the all-electric crossover segment, we really urge you to try out all of them before buying one. Thinking about getting a Mustang Mach-E? Go test drive a Kia EV6 also. Maybe you’ve had your eye on an Ioniq 5? Check out the Volkswagen ID.4 first. And when the Ariya lands in dealer’s showrooms in early fall, make sure to take a look before making a purchase.

In fact, if you prioritize a comfortable ride and premium styling over high performance (although the AWD 91 kWh pack Ariya will be quite a performer) you owe it to yourself to check out the Ariya before deciding which of these five BEV crossovers will end up in your driveway.