It takes about 30 seconds of silently gliding along the streets and past the cyclists of Copenhagen, Denmark in the Volkswagen ID. Buzz to realize this car is something special. Passersby whip out their phones, kids point and smile, and for a second I’m not driving any old van. I’m driving an icon.

That is, pun intended, by design. Volkswagen did this 25 years ago with the New Beetle, and it’s easy to draw a straight line between the ID. Buzz and that first brush with retroism from 1997. Not only do these two vehicles revive classic designs, but they both prominently feature the mechanicals of a less exciting product. Time is a notorious challenge for these retro efforts and there are some clear shortcomings with VW’s latest halo product (as there were for the Beetle), but an early taste of the Buzz ahead of its 2024 North American on-sale date has me hopeful VW’s latest revival will fare better than its last.

In case the “ID” in the name doesn’t give it away, the Buzz is a close relative of VW’s other modern EVs. It rides atop the same MEB architecture (or Modularer E-Antriebs-Baukasten in the original German), but the “M” is the important part of “MEB.”

Calling it a van on top of an ID.4 sells the Buzz short – engineers extended the wheelbase to 9.8 feet and stretched the front and rear track to 65.9 and 65.7 inches (8.8, 3.4 and 4.2 inches more than VW’s electric CUV). The longer wheelbase improves cabin space, and the stretched rear track expands cargo volume. The wider front track allows a 36-foot turning circle, which isn’t far off the ID.4 (31.5 feet), despite the increased length. Speaking of that length, an even-longer-wheelbase model is still to come as the only Buzz variant destined for North America. 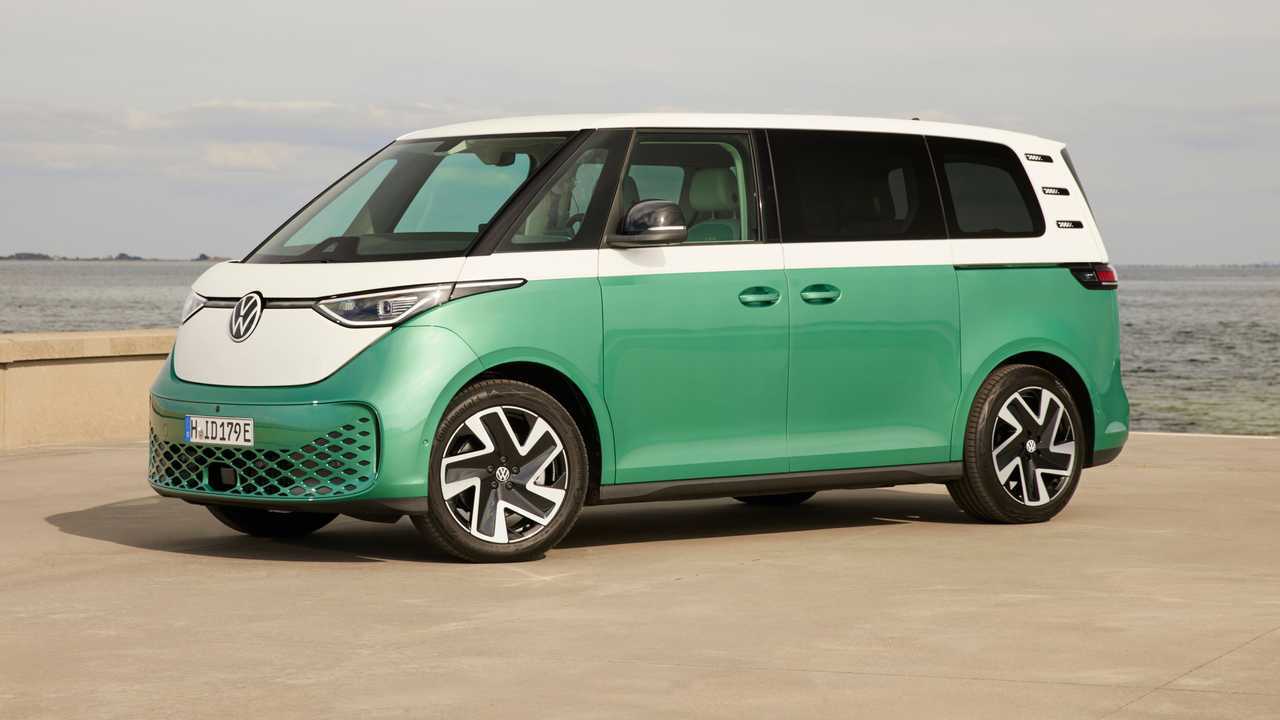 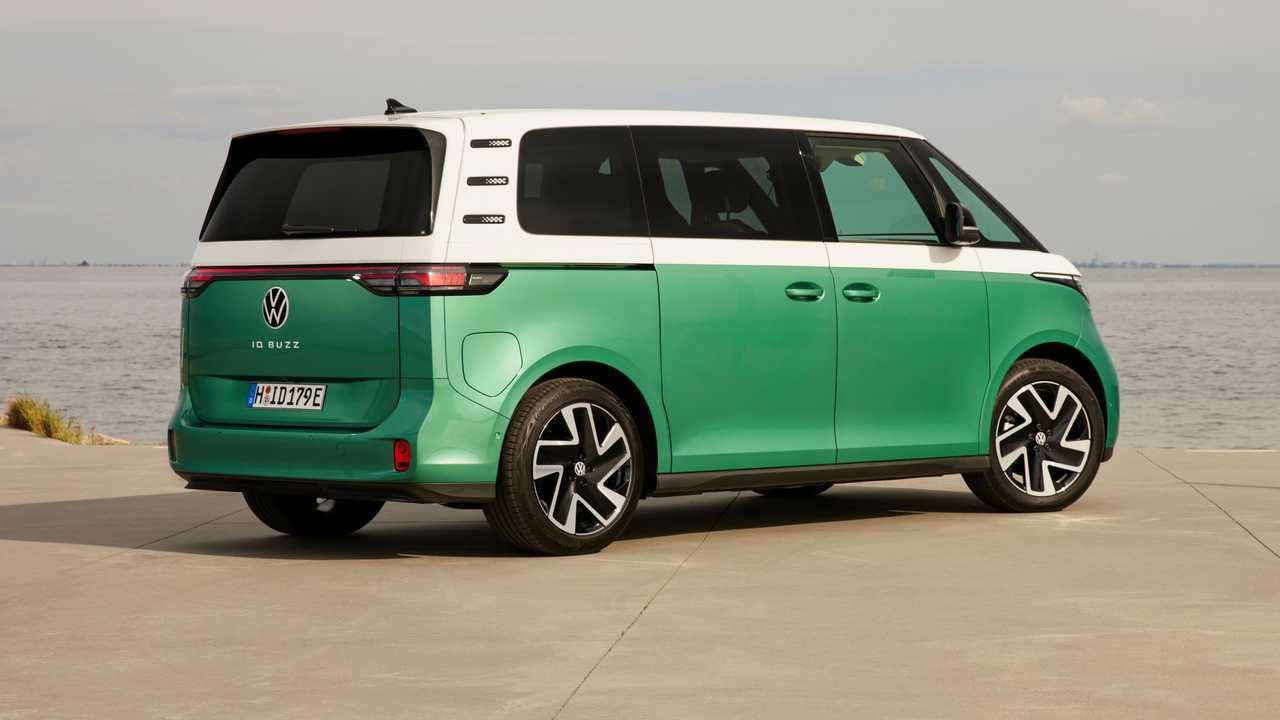 While VW made architectural changes, the ID. Buzz’s powertrain components are far more familiar. The 77.0-kilowatt-hour lithium-ion battery (82.0-kWh gross), lone rear-mounted electric motor, and single-speed automatic transmission are a direct match to what carried the first VW ID.4’s to our shores a few years ago. Ditto the output, at 201 horsepower and 229 pound-feet of torque. Charging rates match the ID.4 too, with 11.0-kilowatt capability onboard and 170-kilowatt speeds at a DC fast charger. Range sits at 249 to 262 miles on the WLTP scale; like the ID.4, expect the final EPA numbers to be down a bit compared to these European figures.

Slip into the cabin and it’s clear this is a member of the ID family. You’ll see the same 5.3-inch digital instrument panel, which seems to float atop the steering column. The twisty-knob gear selector migrates from the right side of that screen to just behind the steering wheel, which uses the same awful touch-capacitive controls first rolled out on the ID.4. A 10.0-inch touchscreen infotainment system is standard, although a 12.0-inch display is optional – both setups run an updated version of the ID.4’s frustratingly lousy operating system that is far quicker to respond. 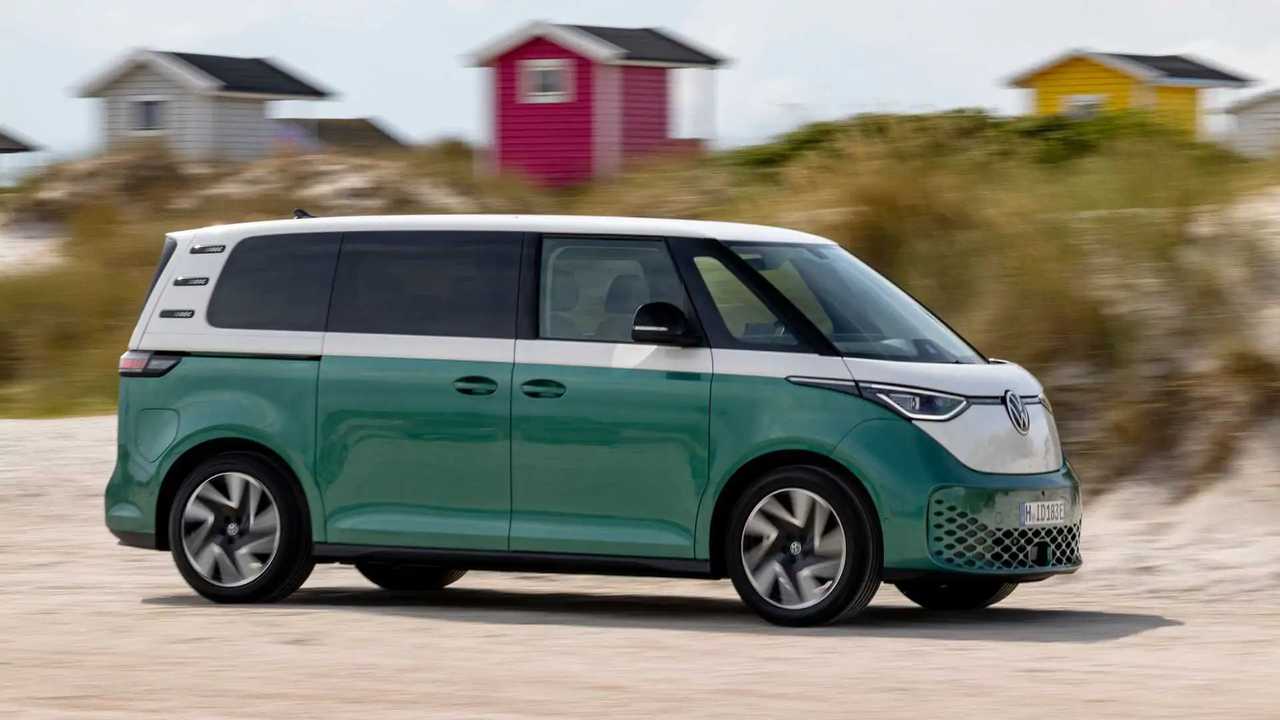 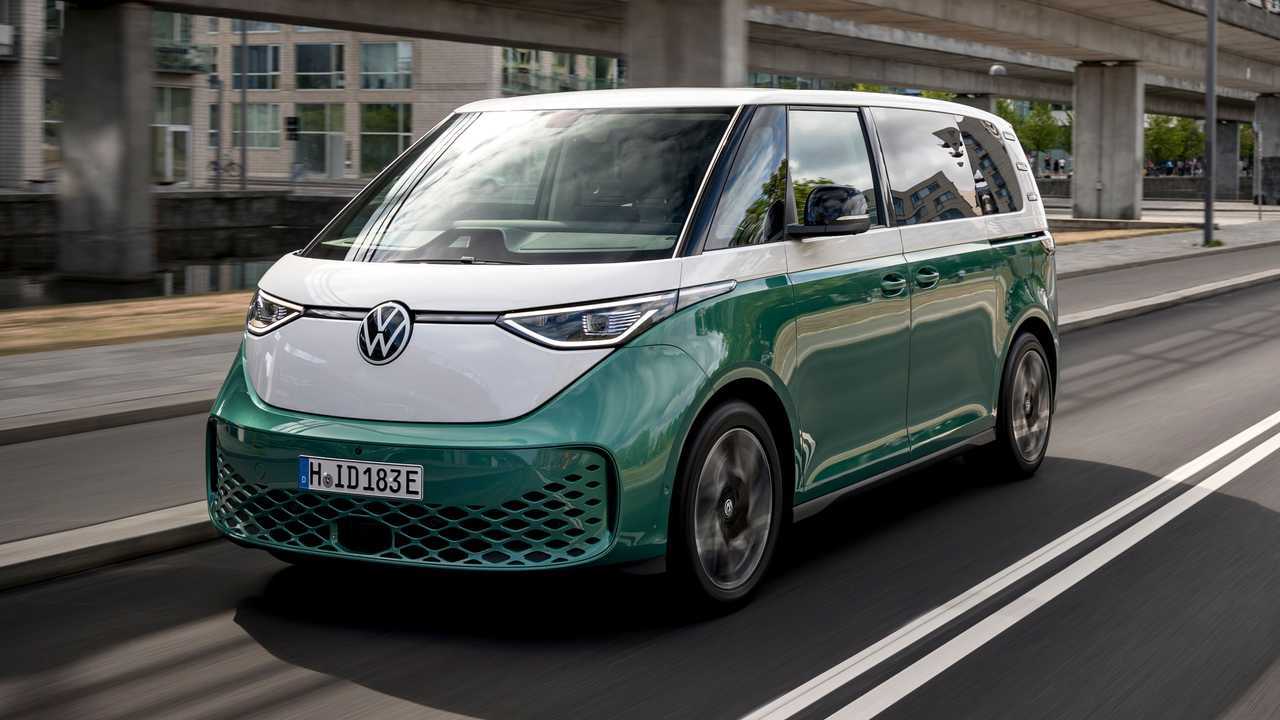 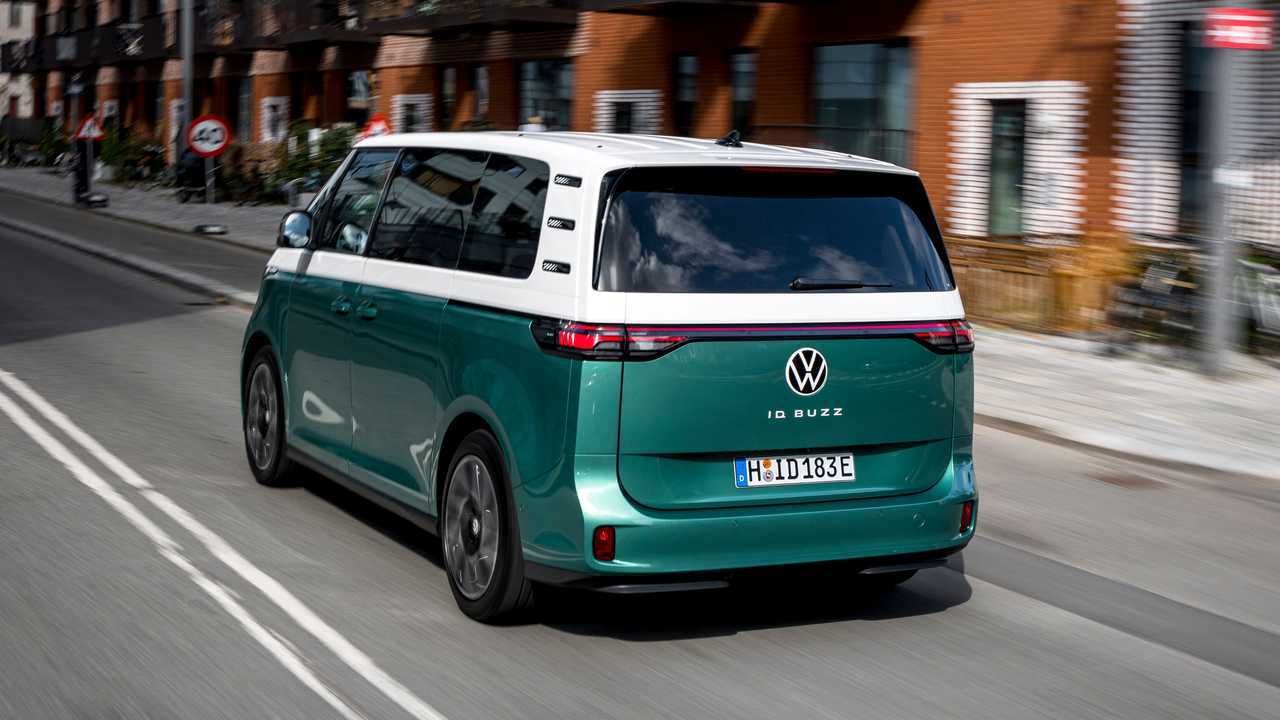 Look, off-the-shelf parts and modular architectures are nothing new in this business (especially in the Volkswagen Group). The broader question is this: Is the ID. Buzz a worthy successor to the decades of Volkswagen vans that came before, specifically the iconic Type 2 Microbus (or Bulli, in Germany)? 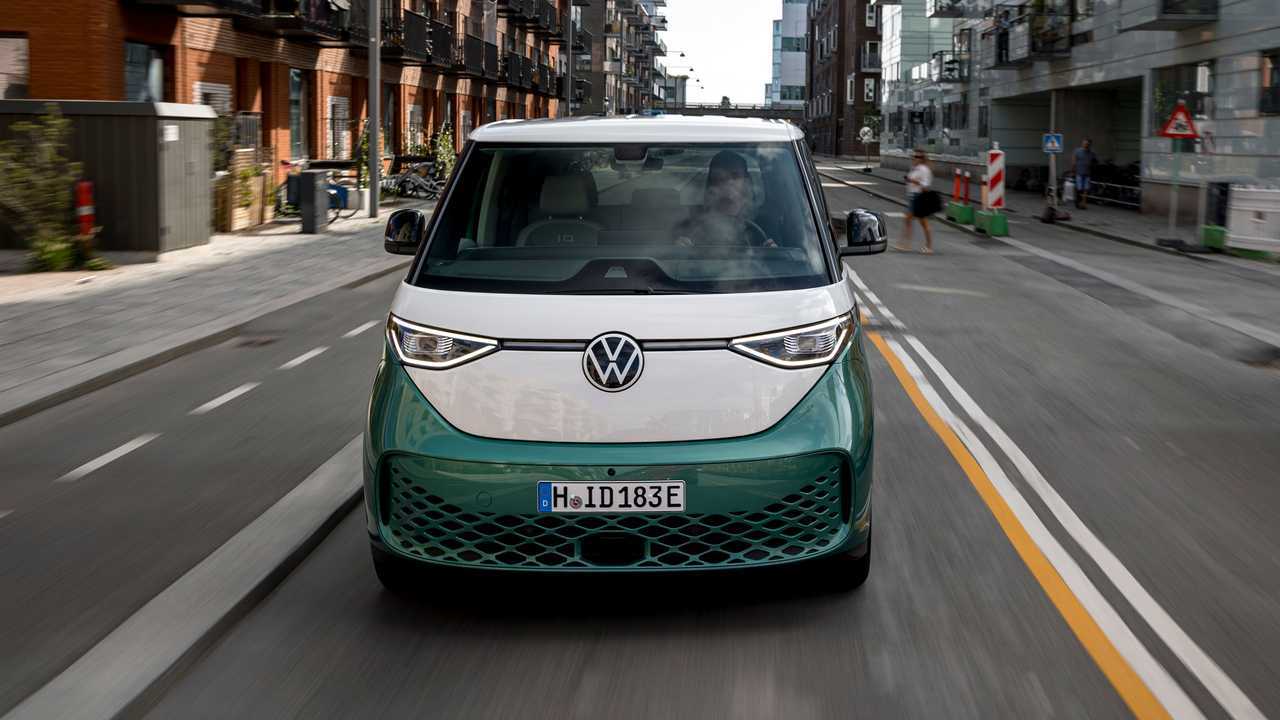 I’m not going to sit here and write that the Buzz is ugly, beautiful, or something in between; you can make up your own mind. But the only other time I’ve experienced the delight, excitement, and curiosity that the ID. Buzz instilled in the public was behind the wheel of a 1967 Type 2. There’s no arguing that the spirit and character of the Type 2, the thing that makes kids smile and former hippies happy, is present here. And it’s present from behind the wheel too, despite thoroughly modern trappings.

Unlike a conventional crossover, the ID. Buzz’s high seating position demands both driver and passenger step up on the door sill and slide into the comfortable, supportive front seats. The trade off is huge amounts of headroom and legroom, along with an upright, commanding seating position. Oh, and the color-matching inserts on the seats are fantastic.

Cubbies abound – the dash splits horizontally, with shelving spanning the width of the dash below the beltline. There are small shelves in the door panels, too. A fold-out cupholder extends from the bottom of the center stack, while a center cubby has two more spots for drinks (or a removable ash tray in my tester, because Europe). And if you watched our reel (above), you know all about the hidden ice scrapper and bottle opener.

From the front thrones, the deep dash spreads out ahead into an expansive and impressive forward view. Designers lowered the touchscreen compared to ID.4 to emphasize the openness out the front, although the active safety system’s forward-facing camera does jut up annoyingly from the bottom of the window and never really leaves the driver’s eyeline. 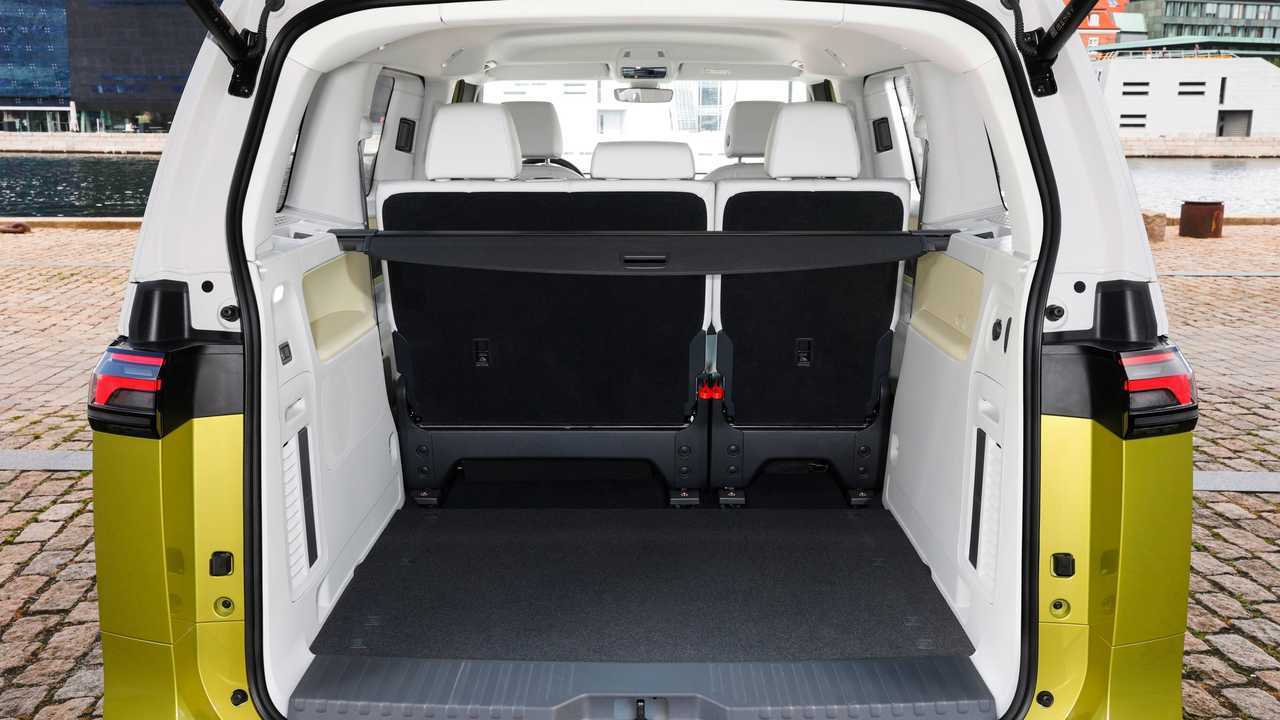 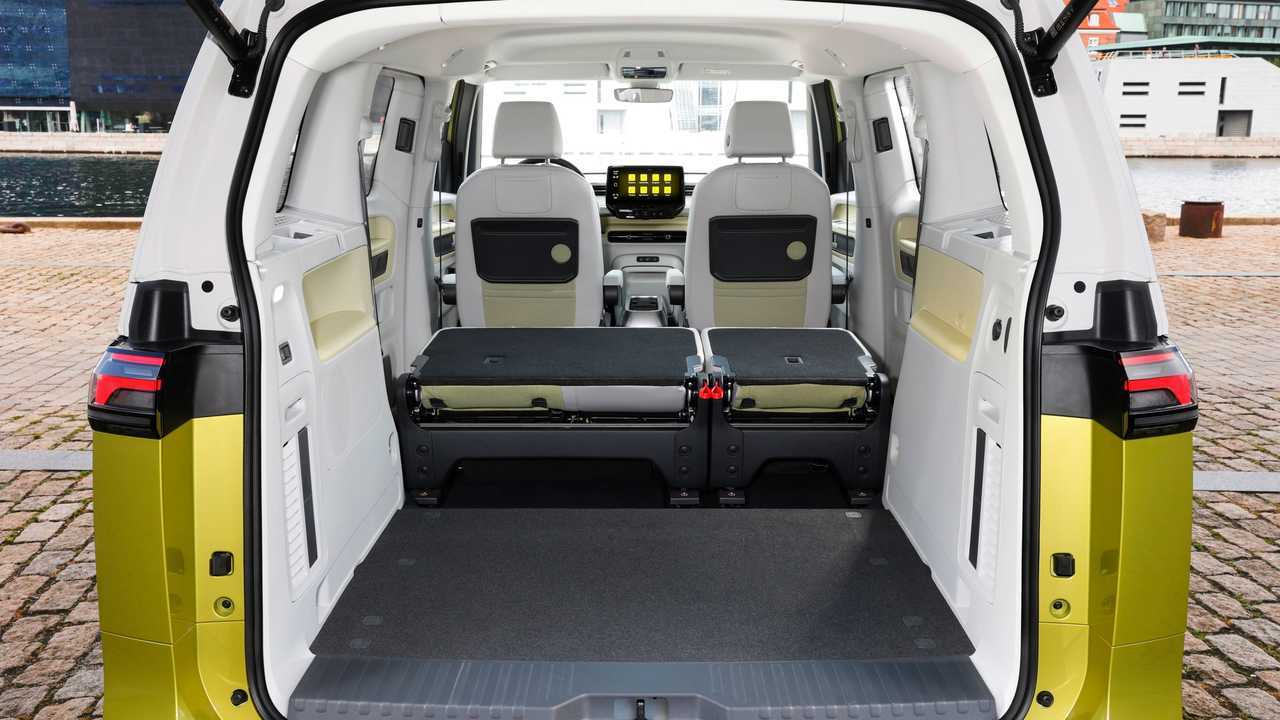 The A-pillars stretch far forward along with huge front quarter windows to mimic the wraparound feel of the original Type 2. But slim rear glass and the lack of over-head windows a la the 21-window Bus mean the cabin doesn’t feel quite as airy as Volkswagen’s iconic models. Still, I’ll take the likely dramatic improvement in crush performance from the steel roof.

VW hasn’t released any interior measurements, but the second-row bench automatically improves on other ID products. The seats are flat and nicely padded, but the trump card is the slider, which moves the 60/40 bench in fore and aft. Passengers can recline the seats on the same split, and with only a small impact on the sizable cargo area. The long-wheelbase ID. Buzz that VW eventually brings to North America should improve in both areas. 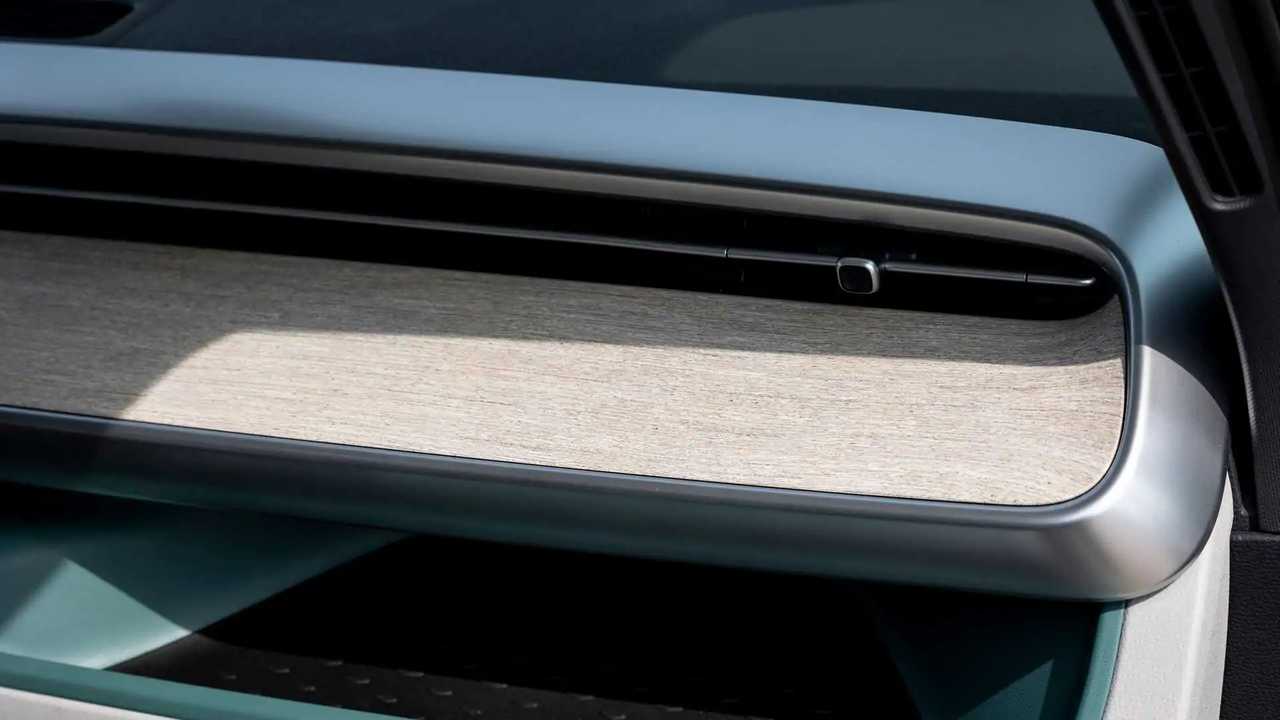 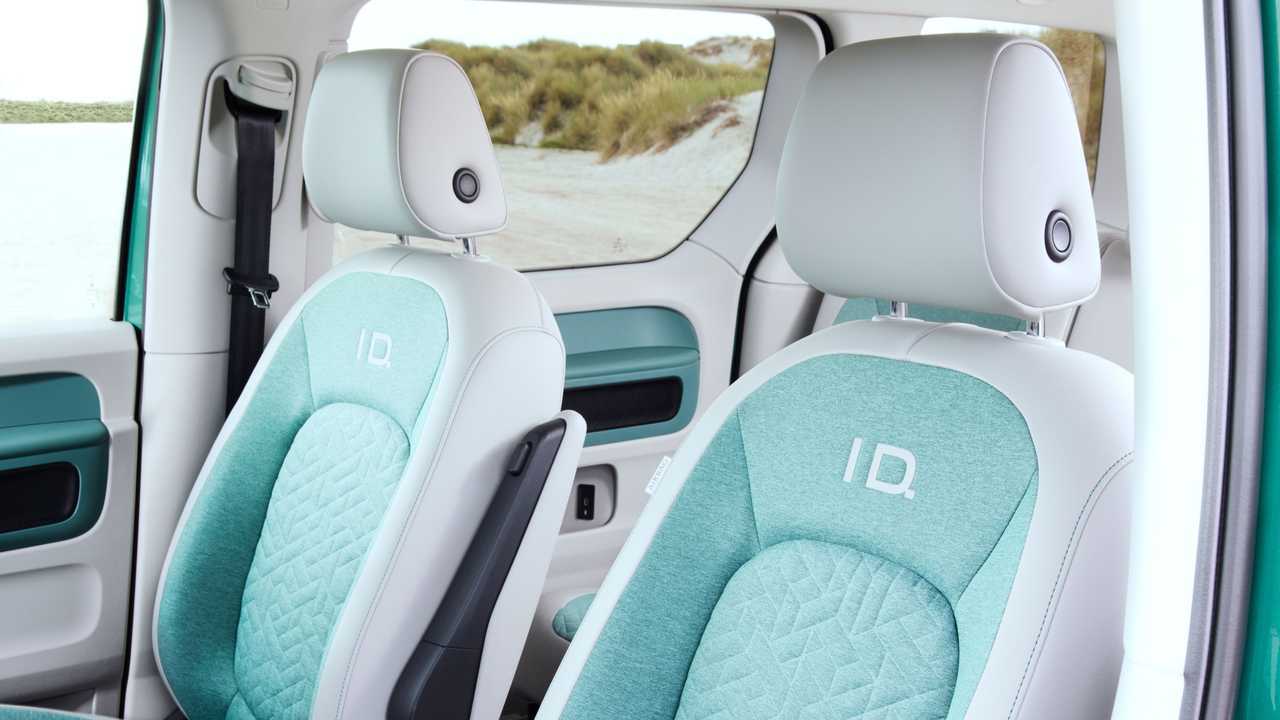 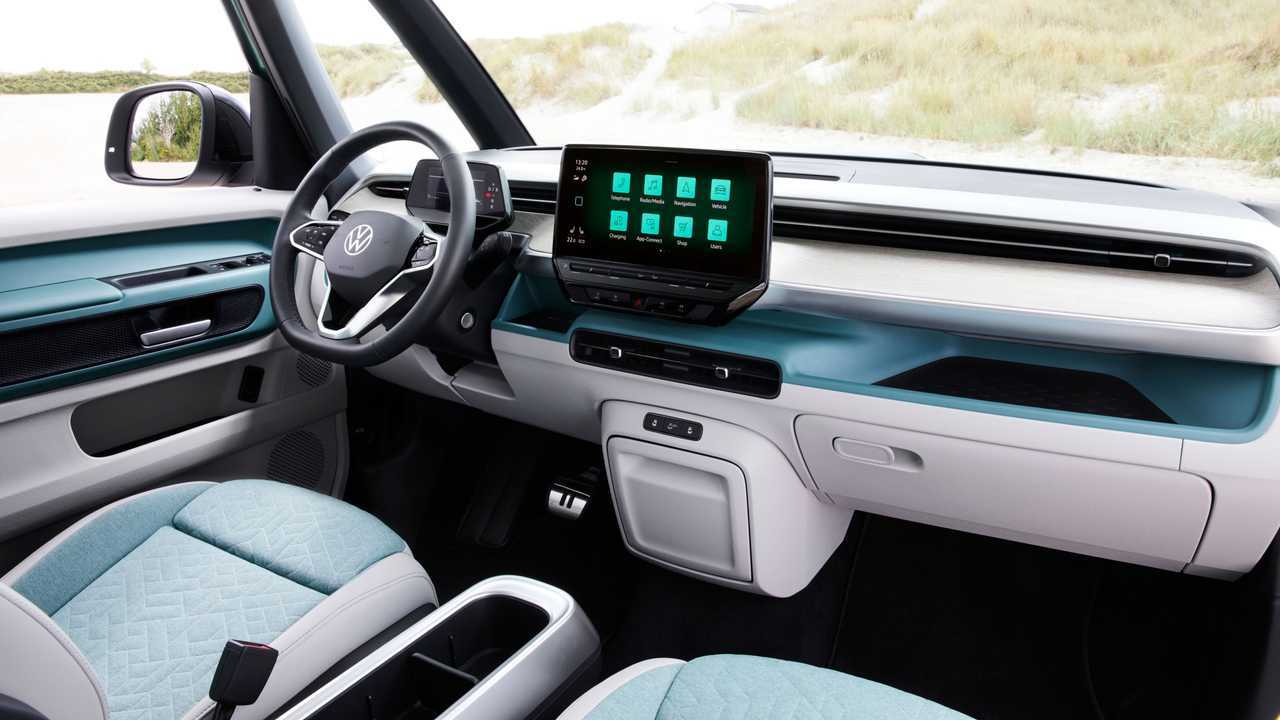 When I tested a 1967 Type 2 a few years back, I mentioned lessons the Buzz could learn from its predecessor. One of those was to not worry about performance. And boy howdy, was Volkswagen paying attention.

At present, the ID. Buzz waltzes to 62 miles per hour in a lethargic, manufacturer-estimated 10.2 seconds. The single electric motor’s 201 hp and 229 lb-ft has to motivate a 5,500-pound van, or half a ton more than a rear-drive ID.4. If this is the Buzz VW offers in North America, the German automaker will be selling the slowest all-electric vehicle on the market, full stop. 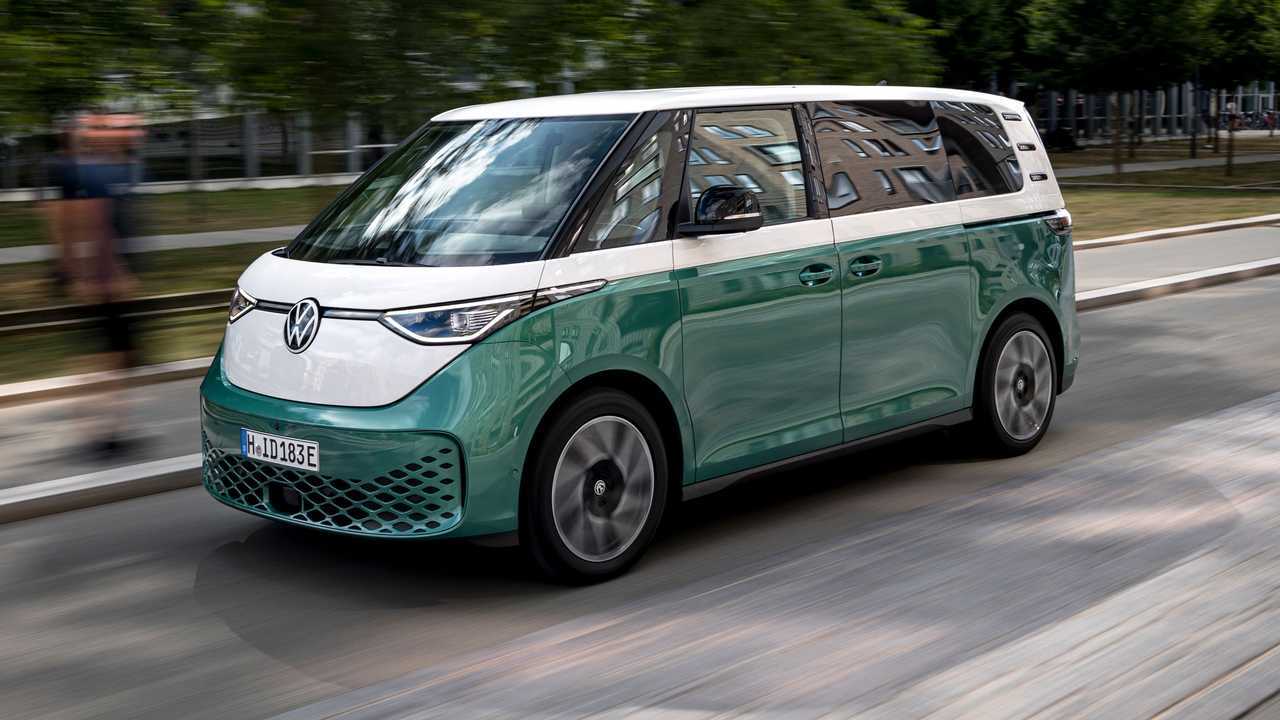 And yet, it feels like a vehicle that’s just powerful enough for European roads – the initial burst of all-electric torque fades quickly, but the Buzz scoots to and stays at 35 happily. In fact, its relatively narrow profile (just under six feet from door to door) and zippy low-speed performance makes this van kinda entertaining around Copenhagen. The high-regen B setting is a good partner in urban areas, arresting speed via accelerator modulation, although the Buzz lacks a proper one-pedal driving mode.

But on the massive Øresund Bridge, which connects Denmark and Sweden by road and rail, the Buzz struggles with higher speeds. The listed max according to VW is 90 mph, but I was only in Denmark for about 48 hours. Joking aside, the Buzz will do highway speeds, but it requires far more accelerator pressure than I’m used to giving. I switched out of B and into the low-regen coasting mode, hoping that the Buzz wouldn’t be fighting against itself, but it made little difference. Ditto cycling through the three drive modes.

Then again, as I wrote in summer 2020, “Electric motors have tremendous performance potential, but the Microbus’ character really lends itself to relaxed cruising.” And on that front, the Buzz performs admirably. Despite the narrow footprint and slab-sided body, the Buzz feels stable and happy crossing the big bridge from Denmark to Sweden.

On the cobblestones around Copenhagen, the steering is isolated and predictable in how it responds to the uneven surface. Bigger impacts, especially those limited to one side of the car, do tend to show off the inherently less rigid body of a van, as there’s some shuddering. Still, the Buzz is unquestionably more comfortable and compliant on a variety of surfaces than the already cushy ID.4. 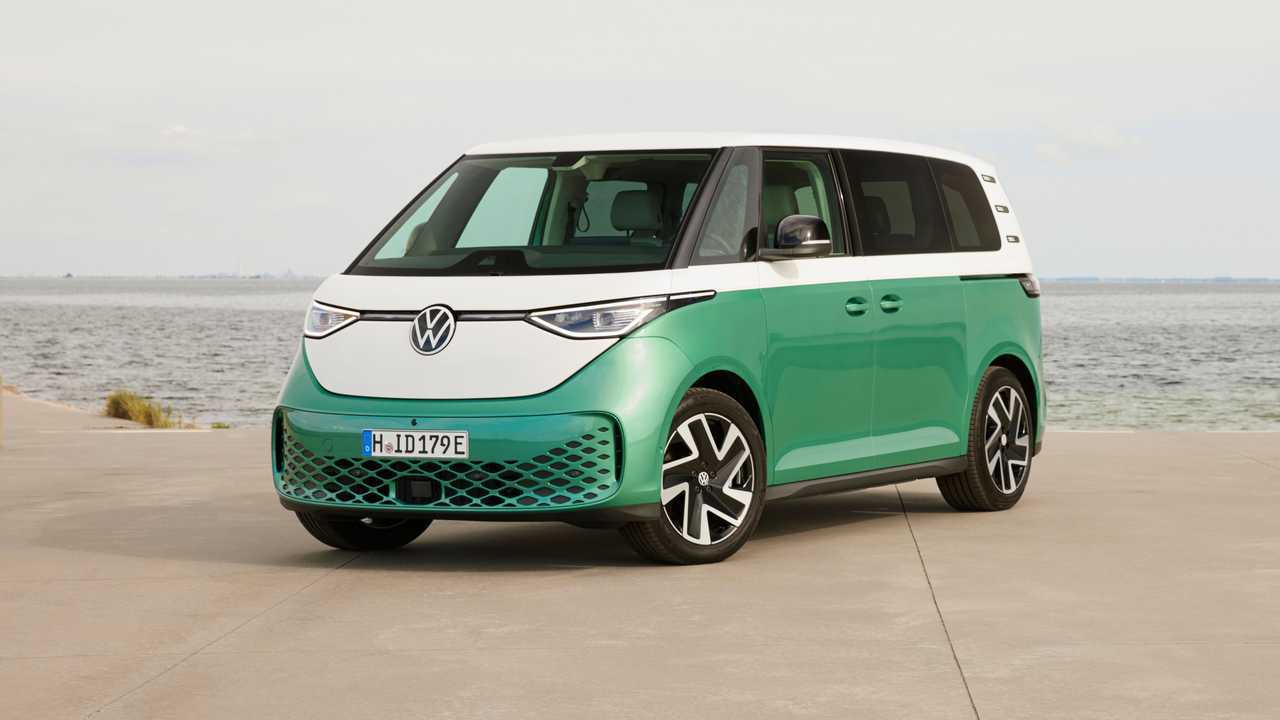 We’re over a year away from a US on-sale date for the ID. Buzz, and VW hasn’t even unveiled the version of this van that will come to North America. So while there are things I didn’t love about this car during my brief test in Copenhagen, take them with a grain of salt. There’s simply a lot of time left for Volkswagen to address them. For example, a dual-motor model that matches the ID.4’s 295 hp will appear and offer the kind of performance American drivers expect. Improvements in software, too, should yield a more impressive range figure by the time the EPA gets its hands on a North American model.

But the things that the ID. Buzz does well in Europe – serving as a reinterpreted icon that provides a halo effect for VW’s other EVs, being the roomiest EV on the market, and packing a cushy driving character – aren’t going to change. The ID. Buzz executes in the areas that matter. In the places it falls short, there’s time to address them. In other words, there’s virtually zero chance this impressive van will be worse when North American sales start. But there’s a very good chance it will be even better.