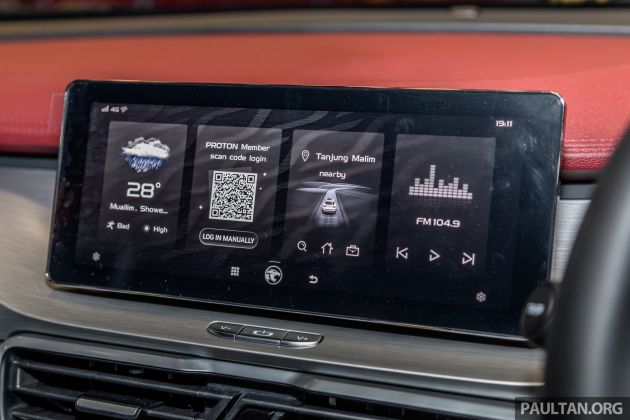 Back in July this year, ACO Tech hinted at an update for the GKUI (Global Key User Interface) software that powers the infotainment systems found in Proton models like the X70, X50, Iriz and Persona. At the time, the company did not provide a launch date, but a new post on its Facebook page appears to suggest that it is coming very soon.

We have confirmed with ACO Tech that the current GKUI software is based on Android 8 (also known as Oreo), but the latest teaser indicates that the new version will make the shift to Android 9, which is referred to as Pie, hence the pie in the post.

Further details about what’s new with the Android 9-based GKUI remain unknown for now, but based on the video clip of question-and-answer excerpts from a few months ago, we could see the Spotify app being included, although another possibility is the Syok by Astro.

The company also said, in regards to possibility of adding Google Maps and Waze, that “these [navigation] apps are not open for any new collaboration with any carmakers in the world.” As such, we can expect both to be left out of the upcoming update.

As for Android Auto and/or Apple CarPlay support, which is something we deemed to be advantageous, ACO Tech did not provide any confirmation, merely saying that these systems are adapted “from the mobile phone ecosystem,” and it believes it is “already in the next [stage] of entertainment and lifestyle,” and hopes that users will enjoy a new experience once the upgraded software has been rolled out.

If you’re unaware, ACO Tech is a joint venture involving Proton, Altel Communications and ECarX (Hubei) Technology that is responsible for supporting as well refining and increasing localised content within the GKUI for Proton. Beyond Malaysia, the company is also developing a version of the GKUI system for the Thailand market in in preparation for the future export of the X70 and X50 to the neighbouring country.

Ahead of a new GKUI version being launched, what features or changes are you hoping will be implemented for quality of life improvements? If you happen to own a Proton with a GKUI system, share your thoughts in the comments below.