After the DBX 707, Aston Martin is unleashing another high-powered machine by introducing the very last V12 Vantage. We’ve been spying on the range-topping version for nearly a year and now the wraps are finally coming off. You’re looking at the most powerful Vantage to ever be fitted with a combustion engine, a twin-turbo 5.2-liter improving the car’s power-to-weight ratio by more than 20 percent compared to the V8 model.

Producing 690 horsepower at 6,500 rpm and 753 Newton-meters (555 pound-feet) of torque from 1,800 rpm, the V12 Vantage has the juicy numbers for the model’s last hurrah. With 385 hp per one metric ton, the supercar tips the scales at 1,795 kilograms (3,957 pounds) after a series of weight-saving measures. Chief of which is the generous use of carbon fiber, including the front bumper, hood, front fenders, and even the side sills. At the back, the deck lid and bumper are also made from carbon fiber. 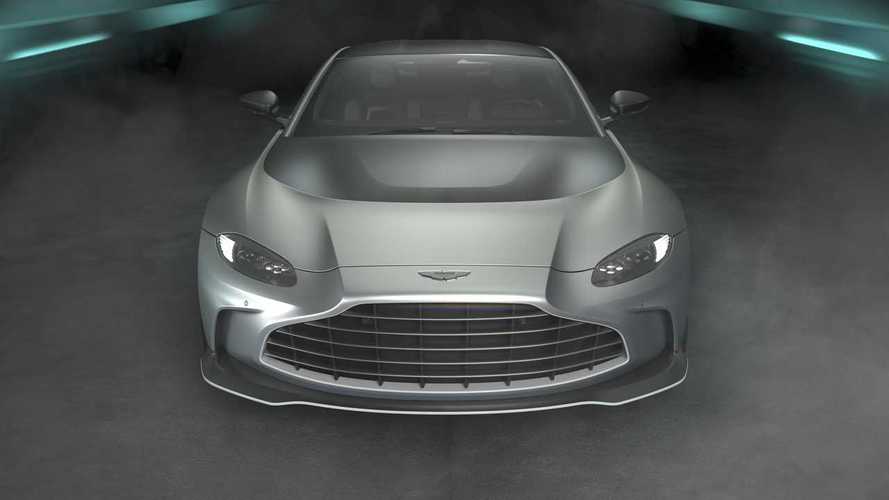 The Draconian diet also consists of a lightweight battery and a newly developed stainless-steel exhaust with centrally mounted dual tips. It shaves off 7.2 kilograms (15.8 pounds) compared to the standard setup and has been specially tuned to deliver a more aggressive soundtrack in keeping with the V12 Vantage’s status as a flagship version.

As part of the weight loss program, Aston Martin’s engineers have fitted standard carbon-ceramic brakes with 410-mm front discs hugged by six-piston calipers while the rear has 360-mm discs paired with four-piston calipers. The CCB brakes reduce weight by 23 kg (51 lbs) compared to the conventional steel setup. The Gaydon-based manufacturer says these can resist brake fade at temperatures of up to 800 degrees Celsius (1,472 degrees Fahrenheit).

Wrapped in Michelin Pilot 4S tires, those fresh 21-inch alloy wheels not only look great, but they also cut a further 8 kg (18 lbs) of fat. As standard, the rubber measures 275/35 R21 at the front axle and 315/30 R21 at the rear. These shiny new wheels are hosted within beefier fenders as the V12 Vantage has been widened by approximately 40 millimeters (nearly 1.6 inches) to accommodate a wider track.

All that power is routed to the rear wheels via an eight-speed automatic transmission and a rear-mounted mechanical limited-slip differential. The ZF gearbox has been adapted to handle the engine’s uprated power and provide quicker shifts by using the lessons learned while developing the V12 Speedster and Vantage F1 Edition.

Another important hardware change is represented by the new adaptive suspension featuring redesigned anti-roll bars, bushes, and spring and damper assemblies. Compared to a regular Vantage, the V12 model has 50 percent stiffer front springs and while the ones at the back are up by 40 percent.

The hardcore performance machine can be made slightly easier to live with by fitting the optional Comfort Package. It brings back some of the insulation to lower NVH levels and it also includes a parcel shelf and divider. Options are aplenty, such as a four-piece luggage set, indoor car cover, trunk mat, and a battery conditioner since these cars rarely get driven.

Already sold out, the Aston Martin V12 Vantage will be limited to only 333 cars and the first deliveries to customers are scheduled for the second quarter of this year.