The latest teaser (below) for the Aston Martin V12 Vantage reveals that the debut is on March 16. It includes the message “Never Leave Quietly,” hinting at the brand preparing this to be the final iteration of the model.

The teaser doesn’t show the V12 Vantage. Instead, the imagery includes a flowing liquid and a flaming orb. Hairs stand up on skin, and then there are sparks. The V12 engine briefly revs.

Previous teasers showed more of the V12 Vantage, including a glimpse of its front end. We also got a taste of the aggressive sound that comes from the engine.

The new V12 Vantage will reportedly be a limited-run model. The next-gen variants of the Vantage and DB11 will transition to electric power. This is likely why Aston includes the message “Never Leave Quietly” in this teaser because the days of selling purely combustion-powered products are coming to a close.

The spy shots of the V12 Vantage’s development show it with a U-shaped covering on the hood, suggesting that might be vents or some other new styling element on the panel. The opening in the front fascia is larger, and there are vertical openings in the corners. 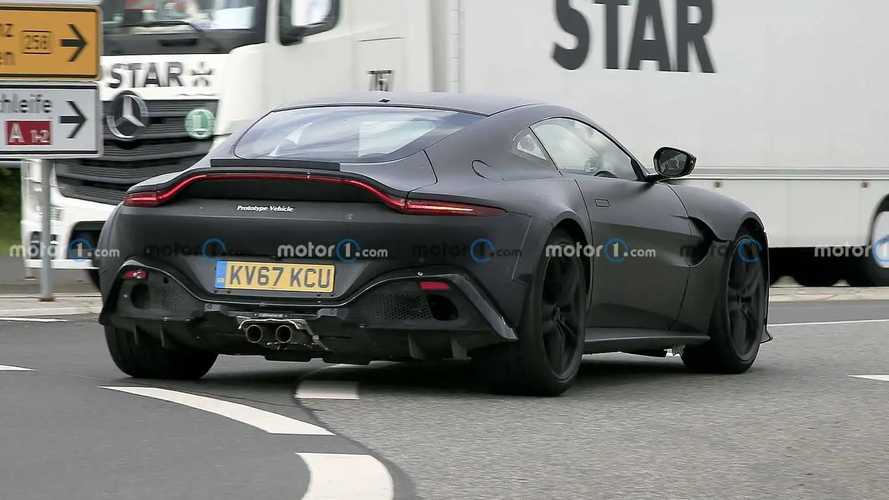 At the back, the spy shots show the vehicle with a pair of center-exit exhausts and a diffuser on each side of the pipes. In the photos, there’s a raised section in the middle of the ducktail spoiler, but a teaser video shows the V12 Vantage with a wing.

The V12 Vantage reportedly shares an engine with the V12 Speedster. That would give it a 5.2-liter twin-turbo powerplant making 690 horsepower (515 kilowatts) and 555 pound-feet (753 Newton-meters) of torque. It runs through an eight-speed automatic.

Following the debut on March 16, the V12 Vantage should be on sale before the end of the year. Aston Martin might make as few as 299 of them, according to a rumor.

Aston Martin plans to introduce its first fully electric model in 2025. By 2030, the goal is for 50 percent of its offerings to be BEVs, 45 percent would be some form of hybrid, and the remaining 5 percent would be track-only, combustion-powered vehicles.