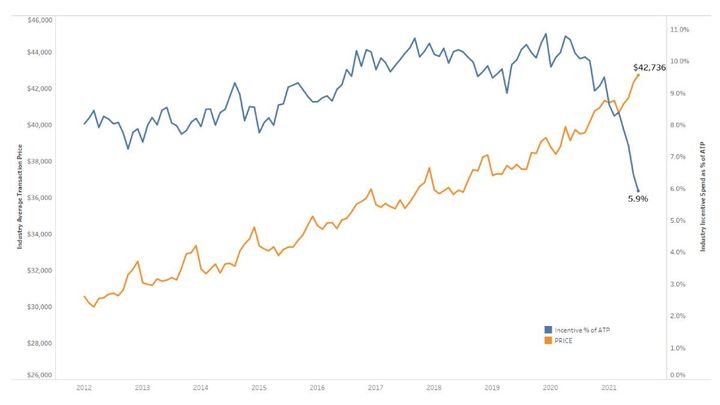 New-vehicle transaction prices have increased – and set new records – for four straight months. A tight supply of new vehicles and a market shift toward more expensive SUVs and pickup trucks are among the main drivers of higher ATPs. However, elevated prices may be cooling consumer demand; after robust sales in March, April and May, new-vehicle sales began to slow in June and July. The seasonally adjusted new-vehicle sales pace in July was the slowest in a year.

In July 2020, the average incentive amount stood at 10.1% of transaction price, according to the analysts at KBB.com. In July 2021, the average new-vehicle deal was above manufacturers’ suggested retail price (MSRP).

Higher transaction prices and lower incentives have combined to drive the Cox Automotive/Moody Analytics Vehicle Affordability Index into uncharted territory. New-vehicle affordability has declined through the spring and set records in each of the last two months. The number of median weeks of income needed to purchase the average new vehicle in July increased to 37.4 weeks, up from 37.2 in June.

Transaction Prices Up Across the Industry

Nearly every brand saw year-over-year growth in average transaction prices. Cadillac prices increased more than 32% year-over-year, driven mostly by the new Escalade full-size SUV, which has been transacting above $100,000 this year. The luxury automaker Genesis, with a new SUV in the showroom, posted year-over-year price gains of 28% for last month. Even Chevrolet and Ford delivered year-over-year gains of 14% and 15%, respectively. Porsche and Tesla were the only brands that posted price drops from year-ago levels, although the Tesla ATP has been skewed by incomplete data.

Non-luxury vehicles showed an 8% year-over-year price increase to $39,865, while the luxury segment saw prices jump 5.8% to $57,546. Vehicle segments with the largest year-over-year increases include hybrids and plug-in hybrid vehicles, luxury full-size SUVs and mid-size cars. The single biggest year-over-year price jump was in the reignited minivan market, where new entries from Toyota and Kia, combined with low inventory, have been driving prices up all year. Families beware: Minivan ATPs have jumped up nearly 17% from year-ago levels, and incentives are well below the industry average.