Okay it’s not really a shootout, so let’s get past the tabloid type headlines purposely written to angry up Chevy and Ford fans blood and take a look through unbiased eyes.

I’m just a mercenary when it comes to car ownership at any given time I’ll have a Ford, Chevy, or a Chrysler product in my garage. Please note that garage in this context is an all-encompassing term that includes patio, backyard, street, front yard, friend’s house, and Wal-Mart parking lot. And by now you might have observed I’m writing in the first person which I’ve noticed quite a few editors in the Motor Trend Group have been doing lately, so I guess it’s okay.

STREET RODDER Feature Editor Tim Bernsau and I discovered as soon as we arrived there were a lot of Tri-Five Chevys and Fords at this year’s Back to the 50’s Weekend, so much we should shoot a Tri-Five Chevy and Ford gallery. Our lead photo is a 1955 Ford Crown Victoria parked in front of a 1955 Chevy Bel Air. A factory top chop the 1955 Ford Crown Vic was a harbinger of 1956 styling things to come with a lower roofline than the 1955 Ford Victoria two-door hardtop. In 1956 the Crown Victoria and the Victoria shared the lowered roofline.

Behind with its hood emblem still intact the 1955 Chevy was the only year sans a “V” beneath the emblem to indicate a V-8 engine was under the hood.

Following the lead image, a very tasty ‘50s-‘60s style custom with major modern upgrades the 2019 ARP / STREET RODDER Road Tour Presented by Ford Performance 1955 Ford made its debut at Back to the 50’s Weekend and look for it soon at the upcoming Syracuse Nationals. The Ford versus Chevrolet battle really heated up after World War II. Ford with its Flathead V-8 and Chevrolet with OHV (overhead valve) six-cylinders engines both found common ground of sorts by introducing OHV V-8 engines. 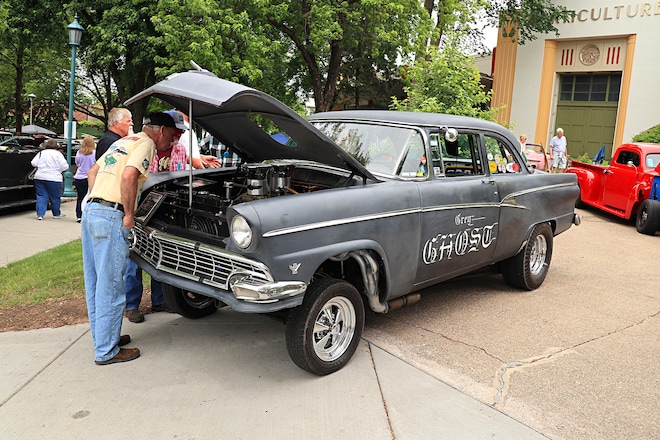 Two of the more unusual Tri-Five Chevy and Ford examples we found at Back to the 50’s Weekend was a shorty 1955 Chevy sedan-delivery and a 1955 Ford Mainline utility coupe better known as an Australian Ute. There has to be someone still left alive that can tell us why some Australian 1955 Ford Utes have an American 1955 Ford grille and some with 1955 Canadian Ford Meteor grilles.

It’s not all that unusual to find a shrunken wheelbase shorty Tri-Five Chevy at almost every event we attend but finding a shorty sedan-delivery was a new one. As one can see the four-door sedans were in ample supply at Back to the 50s and looking pretty good but there was a time when a four-door was the last thing anyone would think of as cool.

It’s a theory because I’ve never asked anyone why they chopped their Tri-Five Chevy four-door sedan short, but I’m going to guess because they despised the un-coolness of a four-door sedan so much they broke out the Sawzall. There was no such thing as a 1955 Chevy four-door sedan-delivery, so who knows why the owner decreased the wheelbase maybe he needed it to fit inside a garden shed.  — John Gilbert