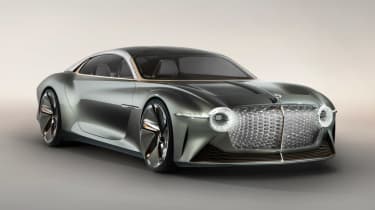 Bentley will become an electric-only car manufacturer in 2030 as it aims to be carbon neutral by the end of the decade, the British brand has confirmed.

The announcement was made as part of the company’s Beyond100 strategy, which outlines how Bentley will aim to become a ‘global leader in sustainable luxury mobility.’

In the short term, Bentley’s entire product range will move towards plug-in hybrid powertrains. The Bentayga is currently the only plug-in model offered in the line-up, but the company has confirmed that two further PHEVs will launch next year – expected to be the Continental GT and Flying Spur.

Bentley’s first fully electric vehicle will arrive in 2025, although the company has not outlined exactly what area of the market it will compete in. However, the EXP 100 GT concept revealed in 2019 did give us a glimpse at how Bentley envisaged an electric vehicle.

Within one year of the first EV’s launch, Bentley’s entire product portfolio will comprise PHEVs and fully electric vehicles only.

Adrian Hallmark, Chairman and Chief Executive Officer of Bentley, said: “Being at the forefront of progress is part of our DNA; the original Bentley boys were pioneers and leaders. Now, as we look Beyond100, we will continue to lead by reinventing the company and becoming the world’s benchmark luxury car business.

“Within a decade, Bentley will transform from a 100-year-old luxury car company to a new, sustainable, wholly ethical role model for luxury.”

Bentley will also work with suppliers, who will have to pass a sustainability audit, in a bid to become an entirely carbon-neutral operation by 2030. Changes will also be implemented at the company’s Crewe factory, which Bentley claims is already carbon neutral, such as a greater reliance on solar power.

Are you pleased to see Bentley switch to pure electric power? Let us know your thoughts in the comments section below…