A hotter BMW M3 variant is in development, and new spy shots show the four-door sedan back at the Nurburgring for more testing. The model is the BMW M3 CS, which will tweak the high-powered model for better performance. That includes a host of upgrades that will likely translate into more power, additional suspension tuning, and extra carbon-fiber goodies.

The new shots give us our best look at the upcoming M3 variant. The face is quite familiar to anyone who has seen M4 CSL spy shots. The sedan gets an aggressive front-end design with a chunky chin spoiler that wraps around the outer edges of the front bumper. The M3 CS also sports additional – more pronounced – slats in the lower grille opening. We can also spot a glimpse of the car’s long-rumored M-specific headlights with the yellow-tinged daytime running lights, which BMW will make standard. 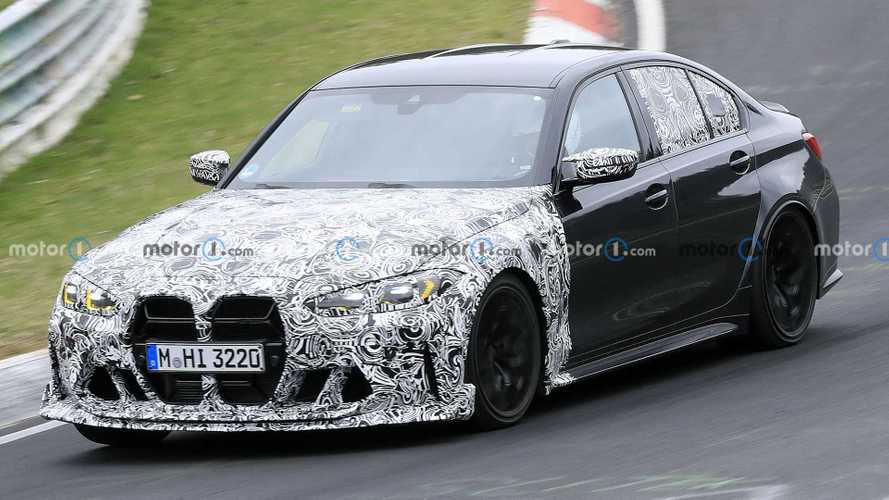 The rear is completely uncovered, though the car wears camouflage over the rear side windows. The car is likely hiding molded bucket rear seats. There are no discernible differences at the sedan’s rear, with the quad exhaust sticking out through a chunky diffuser. Everything looks like your typical M3 back there.

The latest information about the new model says that BMW will stuff its twin-turbocharged 3.0-liter straight-six into the model from the M3, but BMW will crank up the power to a suspected 540 horsepower (402 kilowatts). That’s quite a jump over the M3 Competition, but enthusiasts won’t be happy to learn that it won’t come with a manual gearbox, and each M3 CS will power all four wheels through the brand’s xDrive system.

One thing the camouflage continues to hide is the car’s new carbon fiber upgrades. It’s unclear how much carbon the model will get, but it should help reduce its overall weight and improve its performance. The chunky new chin spoiler would be a great use of the material.

BMW hasn’t announced when the new M3 CS will arrive. BMW will allegedly begin the car’s 11-month production run next March, which means we should see the new model break cover before then. Maybe a late 2022 debut is on BMW’s calendar?