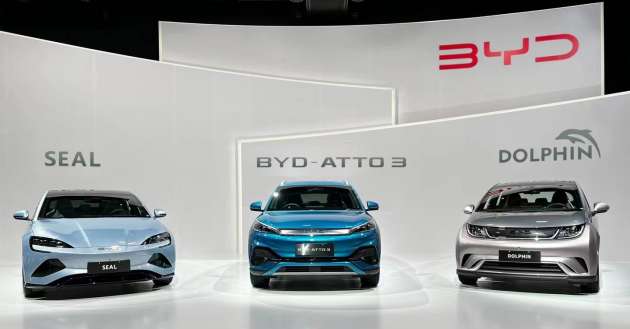 Chinese manufacturer BYD has revealed that it has sold 201,159 new energy vehicles in September 2022, including 200,973 new energy passenger vehicles. This means that the number of BYD commercial electric vehicles sold last month comes to 286 units.

The sales figure achieved by BYD last month is an increase of 183% from the the 71,099 units sold in the same month last year, and 15% up from the 174,915 units sold in August this year, according to CNEVPost citing the company’s announcement on the Hong Kong Stock Exchange.

In March, BYD announced that it had ceased producing purely internal combustion-engined vehicles in order to focus on the manufacture of its battery-electric vehicles and plug-in hybrids. The manufacturer followed up with entering the Japanese market with three EV models in July, the Atto 3, the Dolphin and the Seal, the latter two going on sale in Japan from 2023.

As for Malaysia, BYD has confirmed last month that it will be officially entering the Malaysian market via Sime Darby Motors as its distributor, following talks with the conglomerate. The first two models that have been confirmed for Malaysia are the Atto 3 and the e6.

The Extended Range variant of the Atto 3 packs a 60.49 kWh version of the Blade LFP battery that offers a claimed 420 km of range on the WLTP testing protocol, and can take a maximum rate of charge of 80 kW DC through a CCS2 connection. This way, a full charge from zero takes 1.2 hours, while charging at 6.6 kW AC yields a full charge in 9.5 hours.

Meanwhile, the e6 BEV MPV packs a 70 kWh battery rated for a range of 450 km on the WLTP cycle, which according to Singapore specifications will take 40 KW AC charging via a Type 2 connection to get a full charge in 1.8 hours. The quicker, 60 kW DC charging via a CCS2 connection will do the job in 1.5 hours.

September 2022 has been a successful month with BYD sales reaching 201259 NEVs sold in the global market, contributing to a YoY increase of 151.2%!

We strive to continue innovating towards excellence and providing you with green energy solutions!#BuildYourDreams #EV #Sales pic.twitter.com/tbe14DqvA5