Hunter S. Thompson is dead, but that doesn’t mean journalists covering bad craziness has gone extinct. In fact, it is quite alive, with STREET RODDER accompanying a group of young hot rodders we’ve codenamed the Cincinnati Clutch Cannibals. The days since a real hot rod could be found within the pages of Hot Rod magazine are long gone, and rare in STREET RODDER, yet nevertheless, here’s a pack of five grassroots hot rods and the story of an intense banzai run from Cincinnati, Ohio, headed to the Hot Rod Hill Climb in Central City, Colorado.

It’s been over seven years since my suicide mission from Florida to California solo in the Chadly Coupe, a 7-1/2-inch chopped Model A with a Muncie-backed 331-inch Hemi—so I jumped at the chance to take this assignment. My contact was David Root of the notorious Root Brothers. Not notorious in a bad way, mind you, but their participation in such an event doesn’t quite match up image-wise with their esteemed stature in the automobile industry. 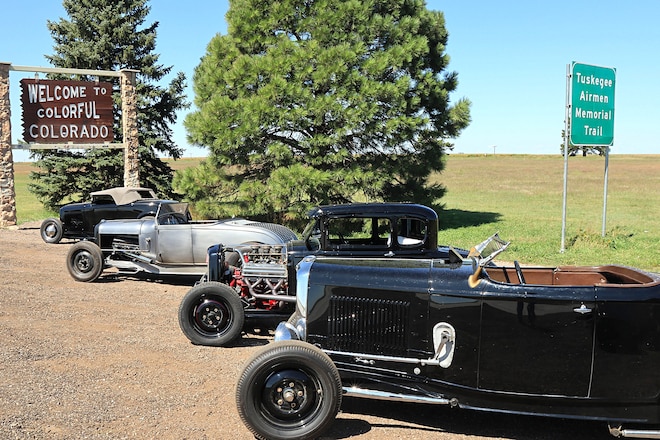 It was almost 1 a.m. when David and I left CVG headed for Mike Whitney’s shop 45 minutes away. It’s a tri-state area. We left Ohio, crossed the river into Kentucky, and I think ended up somewhere in Indiana for the night. The Root Brothers Model A roadster was a fresh build when they made the journey down from Detroit to join up. Mike was sorting out a few bugs that developed in the front juice drums and then the sans paint roadster was ready to go. By profession Mike is a Kia technician with an uncanny skill to fix the mysterious little buggers. For lifestyle, Mike’s an accomplished Sprint Car driver and hot rod builder; the 1932 Ford roadster he’s owned over 15 years handles like a champ. I mentioned the Deuce roadster’s handling because the Hot Rod Road Trip started out as two cars hauling ass through the hollows toward a breakfast meetup at the State Line restaurant I’d call a diner. The Root Brothers in their Model A and me riding shotgun with Mike. The pace for the entire trip was brisk, with Mike leading the pack most of the time. John Gilligan rolled up to the state line in his 4-1/2-inch chopped Model A coupe and joined us for breakfast. After experiencing Cajun Goetta for the first time, it was back into Mike’s roadster and off to a Kentucky Airport to pick up Jim Loughlin flying in from New Jersey.

Jim is standing at the curb when we arrive and Mike tells me to bail out, so Jim can climb in. The only vacant seat is in John’s coupe. Its front wheels shook violently as we headed toward Indianapolis. The irritating wheel vibration seems to come and go as different speeds are attained. John’s most effective remedy was to drive fast enough so the front wheels couldn’t touch the ground.

A call is made, and Jo Kerr refers us to Hoosier Tire Midwest in Brownsburg, Indiana. Racers are a serious helpful lot. The front wheels are balanced with the hubs and brake drums attached, plus a pair of new Speedway AFCO shocks are thrown on for good measure. A look at John’s exposed front brake shoes reveals the rivets are ready to kiss the drums. In between wheel balance and possible out-of-round new tires, the coupe breaks down twice with a plugged fuel filter and a bum fuel pump. Each occasion the new parts are sourced from a stash in one of the hot rods. And with every problem the trip could throw out the Cannibals huddled feverishly and repaired like world-renown surgeons to save a life. 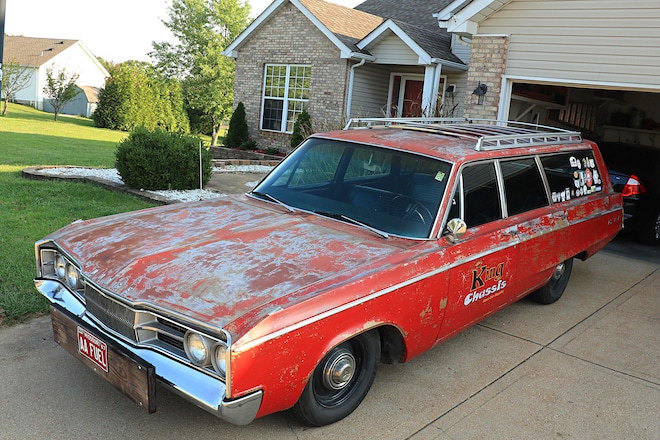 The lure of the open highway is strong and the righteousness of a chopped coupe blasting state to state through everchanging geography far outweighs the discomfort of poor ergonomics combined with petrol-drenched fumes escaping from an uncapped jerrycan in the trunk. The three hot rods rolled into Jo’s JoKerr Fabrication in Brownsburg and were met with two more hot rods. Jo’s shop and the amazing work he does with vintage tooling and equipment could make a grown man cry.

Now we’re five, Nathan Stewart and his dad, Jim, are in Nathan’s Y-block­–powered Model A followed by Henry Richards and sister Laura in a 1932 Ford roadster way too nice to be on this trip. The miles fly by faster than expected and the sun was just beginning to set as we roared past the St. Louis Arch. LSD (liquor store dinners) was a food staple up until we had a fantastic barbecue the first night out at Brian Fox’s abode. Fox is famous for King Chassis, custom-built rails for front-engine dragsters.

The next morning was 9/11 and Mike passed out American flags to fly on the cars, sending a big F-you to the A-holes who perpetrated the terrorist attack 18 years ago. Our fun goal for the day was to visit Pete and Jakes in Peculiar, Missouri, and see the “California Kid” in person. STREET RODDER editor Brian Brennan underwrote half-a-dozen large pizzas and pop, Pete and Jakes supplied the tables and goodwill. Like big kids the Cannibals took turns sitting behind the wheel in the California Kid. 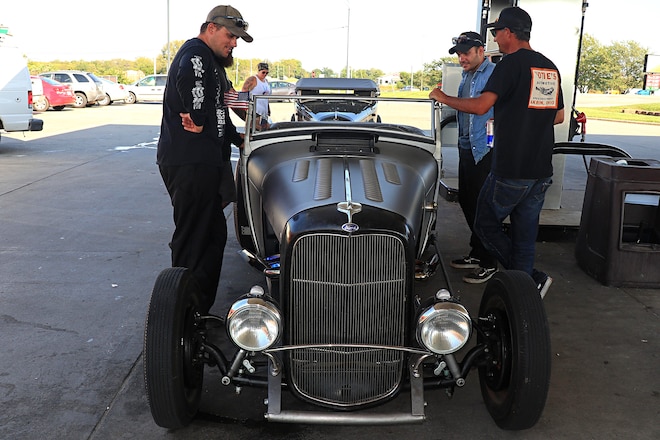 After big fun burning daylight at Pete and Jakes the 350-mile push counting dirt road adventures in the dusty dark was to the WaKeeny, Kansas, KOA for barbecued steaks and canned asparagus. Up until now the weather was hot, but it rained in WaKeeny that night just enough to soak the roadster interiors and make me glad I brought a Walls-lined sweatshirt hoody jacket. John’s Model A never hiccupped once after day one, but during day two and worsening day three leaving WaKeeny the Root Brothers roadster continued to have carburetor problems. A float on one of the six Stromberg 97s didn’t want to stay afloat while other carbs gurgled. Between I-70 and the town of Grinnell we set up shop in front of an abandoned Firestone Farm Tire store. A perfect example of how nice the people are in these regions, a kid in a Car Quest parts delivery truck stopped to ask if we needed help.

Wind farms are big business in Kansas and that’s because the wind blows like hell constantly. So much fierce wind that John had to pull the coupe over to the side of I-70 three times to reattach the canvas top ultimately with 200-mph tape and remove the steel visor hanging by its gums. By the time John and I caught up to the pack the Cannibal surgeons had the Root Brothers roadster operational. Coming in from the East on I-70 Colorado is as stark a high desert as one can find anywhere, but pushing west at 85 mph the tips of the Rocky Mountains rise up out of the desert floor like giant pagan cathedrals.

We did it; we hit the Colorado border with plenty of daytime left and drove directly into Denver to whoop it up at DeLuxe Speed Shop’s Hot Rod Hill Climb open house. 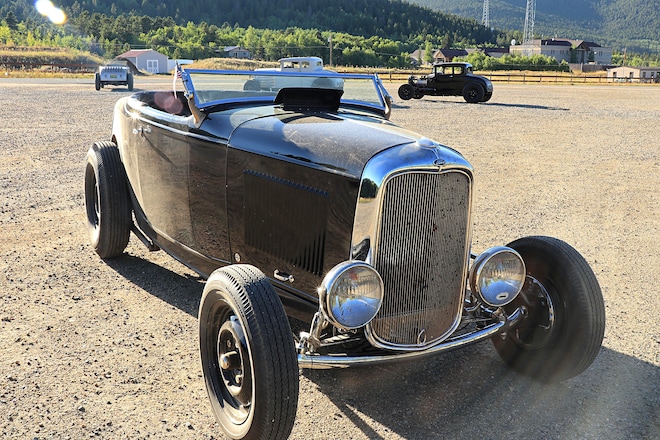