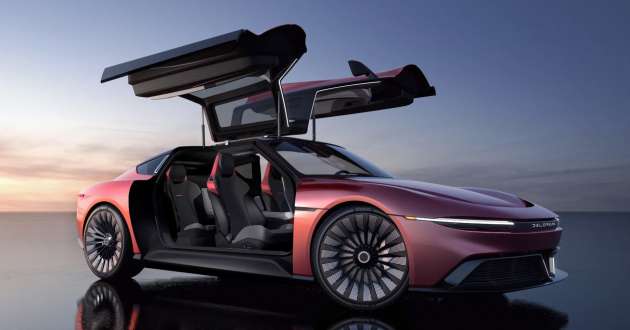 DeLorean is back, and the first all-new model to spearhead the brand’s rebirth is this, the all-electric Alpha5. Currently a concept, the EV will make its public debut at Pebble Beach in August before being put into production in 2024.

Like the iconic DMC-12 before it, the Alpha5’s design was penned by Italdesign. However, this isn’t a retro modern take on the classic, although we do get a few references to the classic that became instantly recognisable thanks to its starring role in the Back to the Future franchise.

These include gullwing doors, multi-spoke wheels, a straight character line that goes all around the bodywork and a vented rear windscreen cover. Beyond these throwbacks, the four-seater is a lot more curvaceous than the boxy and angular shape of the DMC-12, which is important to achieve a drag coefficient of just 0.23.

Another departure from the past is the lack of brushed stainless-steel panels for the vehicle’s body, which was another trademark of the classic. The segmented window lines are also gone here, replaced with a modern greenhouse instead. 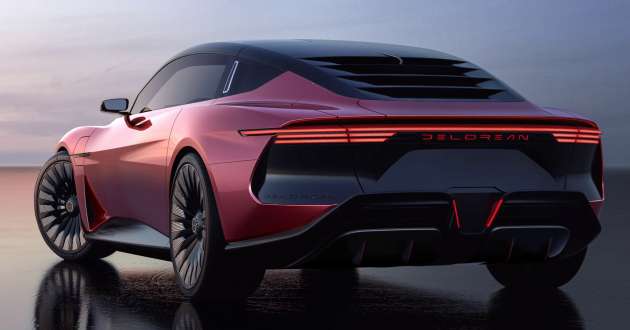 Elsewhere, the thin LED headlamps meet an emblem that reads “DeLorean” rather than “DMC,” accompanied by an illuminated V-shaped element set on a slatted lower intake that integrates a front splitter.

The V-shaped light signature is replicated at the rear, placed just above a prominent diffuser. The rear section also has a “DeLorean” embossing and three horizontal lines that make up the full-width taillights, bookmarked by vertical outlets.

Stepping into the cabin, we find four individual seats and a simplified dashboard that only houses a digital instrument cluster and wide-width air vents. Other aspects of the interior include a flat-bottom steering wheel, while a portrait-format touchscreen is integrated into the floating centre console. No flux capacitor or Mr. Fusion reactor in sight, unfortunately.

The DeLorean Motor Company didn’t provide detailed information of the platform used for the Alpha5, but it did give us some information about the powertrain, with the figures mentioned being mostly estimates for now.

As reported by Autocar, the Alpha5 will initially be sold in a limited run of 88 Launch Edition cars, which is a reference to the speed needed for Emmett ‘Doc’ Brown’s DeLorean to time travel in Back to the Future. It’s fitting that the company also states that it takes just 4.35 seconds to get from 0-142 km/h, or 0-88 mph.

The Alpha5 will be produced in Italy, with the powertrain coming from a partner in the United Kingdom, while the DeLorean Motor Company will be based in the United States. After this model, the company says it will bring to market a V8-powered coupe as well as a hydrogen-powered SUV.