I’ve reviewed tons of Leatherman multi-tools. Okay, so I’ve reviewed four, but I’ve had the same chief complaints among those I’ve test. One tool is underutilized, the bit socket, and the lack of a pocket clip is downright criminal. Don’t get me wrong, multi-tools from the king of multi-tool makers are excellent tools, but they can, and should be improved.

I think it’s madness that the vast majority of multi-tools don’t actually come with a pocket clip; they come with a belt pouch. But those are ungainly and make you look like a dork. And if Leatherman is going to feature a proprietary modular bit system, the corresponding bits should be easy to use, simple to install and come in a wide variety to support the influx of Hex, Torx, and other non-standard screw heads I’ve recently noticed. Leatherman has solutions to these issues, but the pocket clip and bit kit accessories are extra. 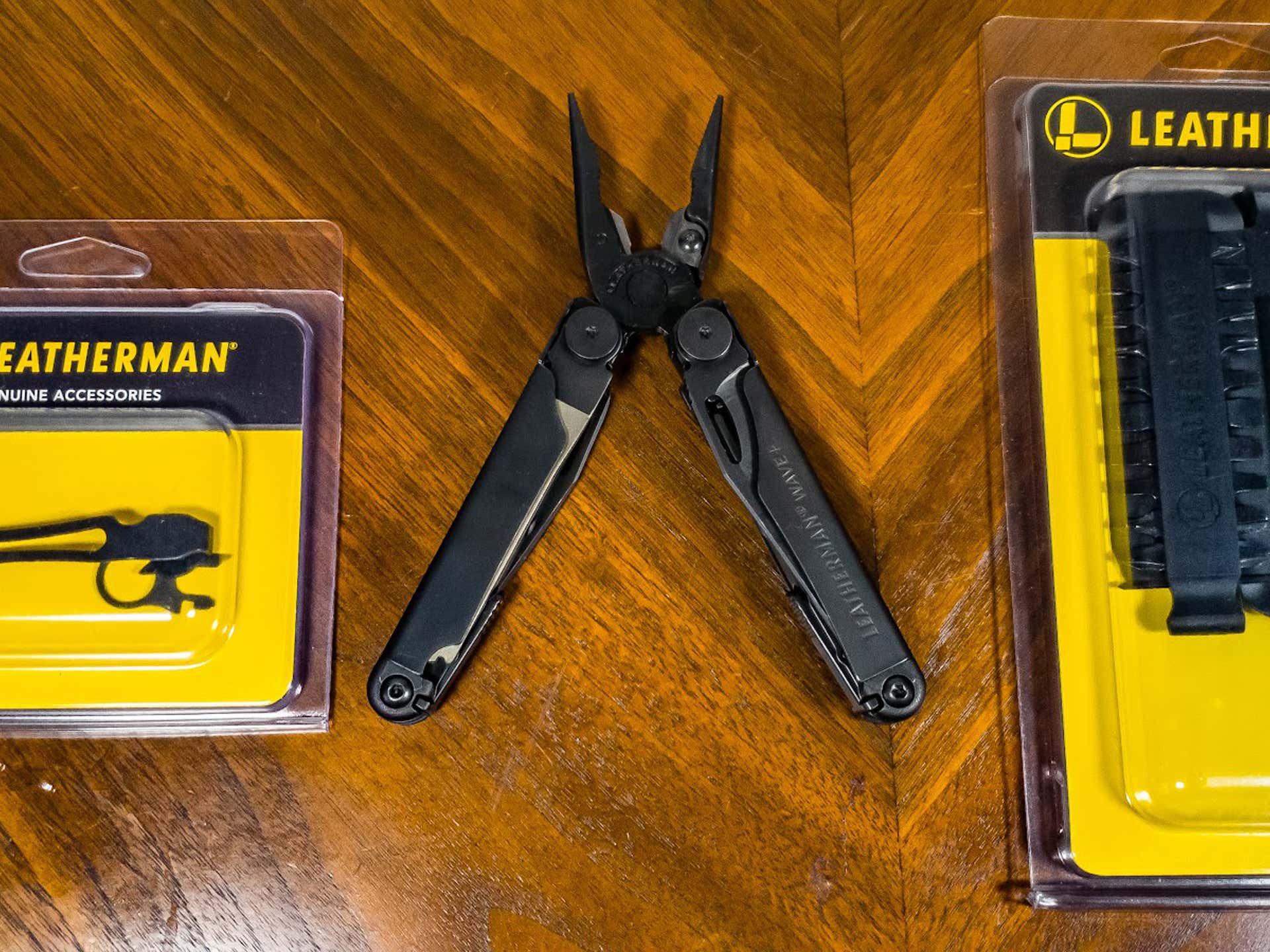 The bit kit can be purchased from Leatherman for $24. It’s not a terrible price, as there are more expensive bit kits, such as the one from Milwaukee for $32.56, Dewalt’s for $29.38, or Ryobi for $25.08. Cheaper ones exist, too, like Neiko’s which runs $13.99. This makes Leatherman’s offering pretty on par with the rest of the products we’d trust. Though, Leatherman does offer the bit kit for free on the company’s website when you purchase a new multi-tool. See, you’re saving, you just need to drop $100+ bucks for a new multi-tool…

As for the pocket clip/lanyard loop set, it’s $5 for the silver set, $6 for black. That’s much cheaper than the very limited aftermarket solutions. Of the two we found on Amazon, the $15 Donk—yes, that’s the company’s actual name—seems expensive for something so basic, and the $10 no-name brand says it’s titanium, but it still isn’t as cheap as the set from Leatherman. So there’s value there, though it still should come as standard.

Given Leatherman is famous for its robust multi-tools, we really wanted to see how much these available accessories augment or further those capabilities, so we ordered both and set them to work.

Unboxing and Initial Impressions of the Leatherman Bit Accessories

Both items come in plastic clamshell packaging with a paper card inside that displays the capabilities of either product. It’s not my favorite kind of packaging, but at least it’s the kind that can be easily pulled open rather than the fused together kind that requires a plasma cutter and a trip to the E.R. for stitches.

Inside the packaging for the bits is a small, folded paper manual that details all the various Leatherman accessory kits, including accessories I don’t have. Within those instructions, it details every bit that’s included, its diameter, and which multitools it works with. The bits come in two plastic holders, designed to slip into the included pouches of most Leatherman tools.

The holders themselves feature an embossed Leatherman logo and 11 slots, each for a particular tool. Both holders are identical, which allows you to select from the 21 total bits. At the top of each holder, there’s a handle of sorts that allows you to pinch it and pull the holder out of the pouch more easily. And the bits themselves are compatible with the Leatherman Cam, Charge series, MUT series, Piranha 2, Pump, Rail, Signal, Skeletool series, Surge, and Wave series.

The pocket clip and lanyard loop set to come in the same packaging with the same paper manual as the bit kit. No tools are required to fit the pocket clip for the Surge, Charge series, and Wave+ multi-tools. While the pocket clip’s usefulness is apparent, the lanyard might not be to the average reader. This piece offers retention for anyone carrying their multi-tool while climbing, rafting, or any other activity that presents a possibility of misplacing your gear either in some swift rapids or off a ledge on El Capitan. 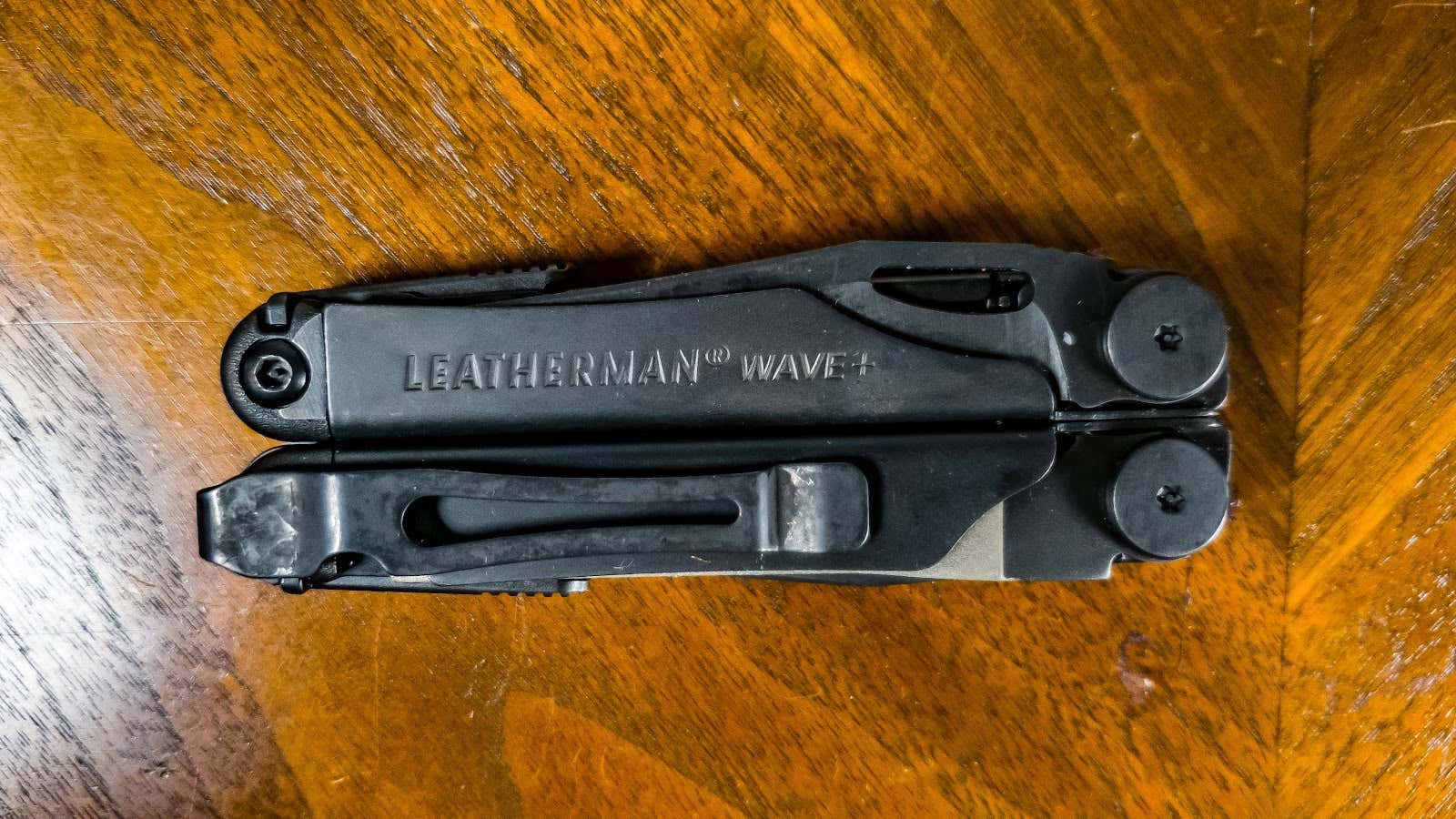 The tool I used as host was the Leatherman Wave+ I just reviewed.

I opted to take a selection of bits I normally use for tasks around the house: large and small Allen keys and a selection of Phillips and flathead screwdrivers for a variety of screw sizes at the jump. Versatility is the name of the game with these, so I tested the bits on a variety of small jobs to see how much each adds to the Leatherman’s capabilities.

The smallest test was repairing a wristwatch using the flathead screwdriver attachment for glasses since the watch uses screw-pinned links. The bit was perfectly capable in this regard. It’s also useful for the stated purpose of repairing eyeglasses. 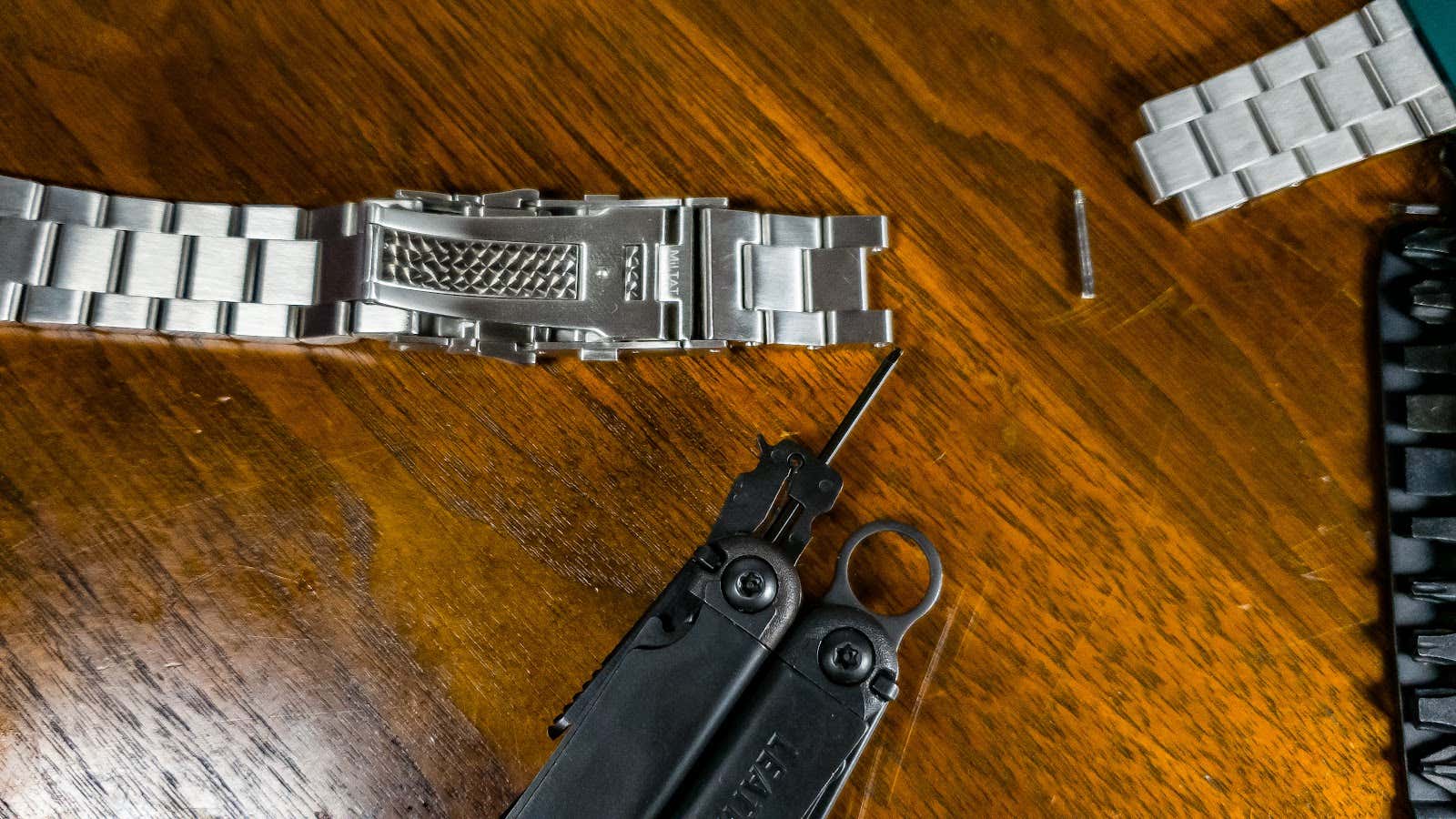 Although I read through the manual, I was initially confused by the larger, square-shaped bits, until I realized that they’re supposed to be used for large hex-key applications. Realizing the boneheaded mistake I’d made, I used the bits to tighten the bolts on my metal bed frame, because (insert creaking bed joke here). The set worked really well, as long as you properly seat it first and choose the right head, which can be a bit of trial and error — more than it would be with a full-size hex key.

As a downside, the bits were difficult to remove from the socket on the Wave+, requiring me to use another set of pliers to remove them the first few times — ironic considering that the Wave+ is a jazzed-up set of pliers. This is more of an issue with Leatherman tools in general, though. Nearly every product I’ve tested from the company has a break-in period. 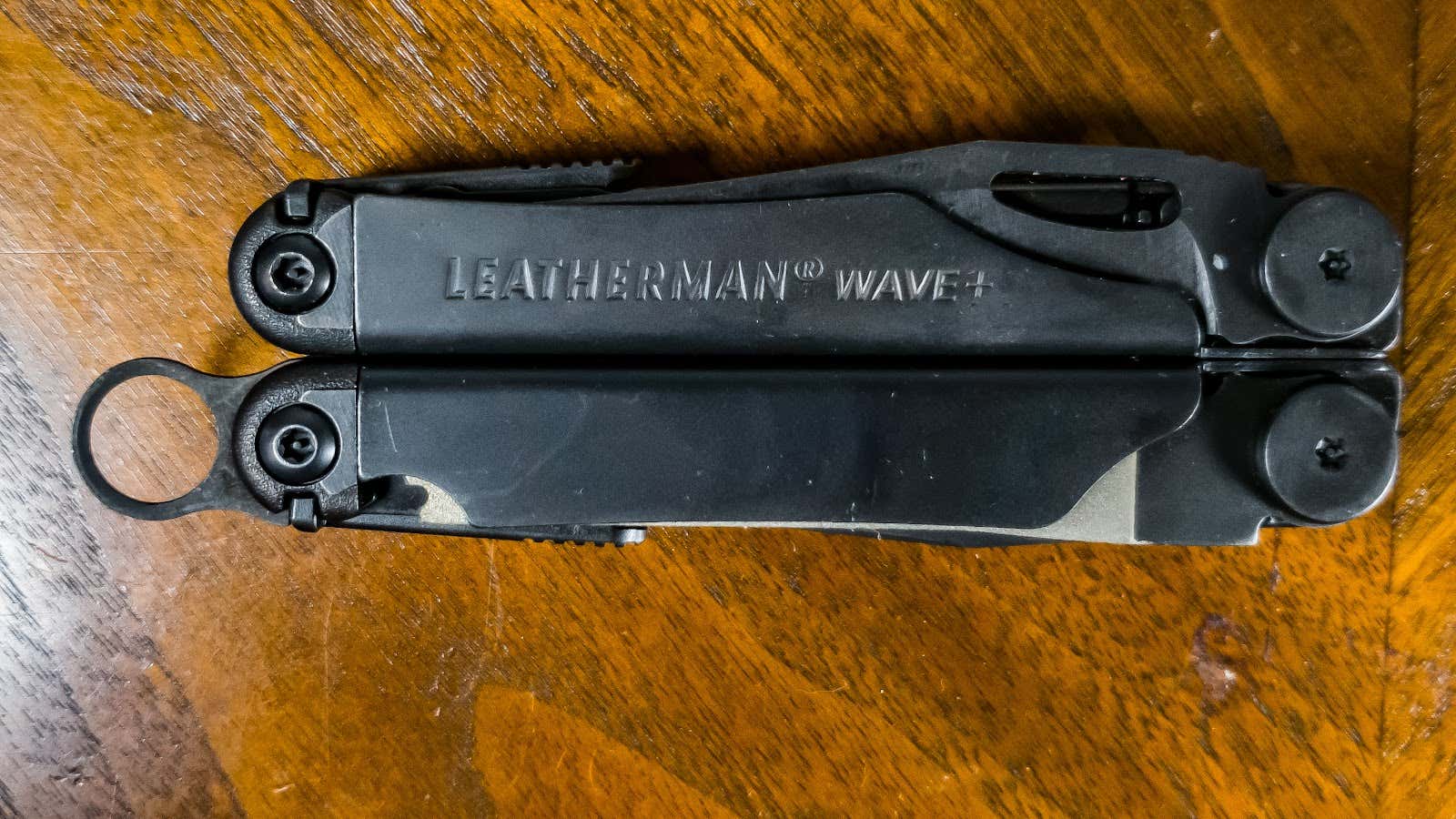 The pocket clip and lanyard loop click in easily. All you have to do is rock it into the slots on the tool while holding down the lock, releasing it once it snaps in. While this clip allows you to easily carry the Wave+ in your pocket without using a pouch, it does little to counteract its bulk.

As for the lanyard loop, it adds a bit of length to the tool but not much. It easily allowed me to dummy-cord the tool to my belt loop as if I was in a climbing scenario. However, using the pocket clip precludes keeping one of the bit kit holders in the same pouch as the tool.

This kit definitely enhances the utility of a lot of the most popular Leatherman multi-tools, allowing you to fully realize the concept of a tool kit in your pocket in a new way. A lot of common fasteners now use hex keys or torx bits, and the bit kit addresses this issue handily.

In a stroke of design genius, the flat profile needed to make the bits work in a bit driver folds into the handle. The pocket clip and lanyard loop add an additional layer of flexibility in terms of carrying your Leatherman of choice and are simple to install with no tools required — a huge bonus.

Leatherman also makes a bit adapter for its proprietary flat bits that convert the socket into a standard hexagonal bit size, which allows you to use pretty much every single-sided bit on the market.

What’s Not Great About the Leatherman Bit Accessory Kit

Seriously, why is the pocket-clip option not standard? Considering that most people don’t wear nylon sheaths on their belts, it would be a great way to enhance the utility of more traditional Leatherman tools and bring them more in line with what people have come to expect from a modern pocket knife.

You also don’t technically need to purchase anything directly from Leatherman, as the company Donk makes aftermarket pocket clips and lanyard loops, too. Unlike the Leatherman’s, however, they can be had with cool, engraved designs, which adds a bit of visual interest. They are more expensive, costing you about $16 at the time of writing. Compare that to $5 or $6 for the Leatherman-spec units.

The bit kit is great, but when every single Leatherman I’ve ever handled has an incredibly sticky bit driver, it’s a pain until it’s broken in, which varies from tool to tool. And when dropped into the sheath, it makes for a cumbersome belt tool. I’d definitely purchase the bits on a case-by-case basis because even though they offer quick accessibility, you probably wouldn’t want this as a replacement for a proper set of tools.

Our Verdict on the Leatherman Bit Accessories

These are quality accessories and will do what they’re advertised to do. But it’s a good thing that, at the time of writing, you can get the bit kit for free with the purchase of a Leatherman from the company’s website.

I’m just not sold on its usefulness for the average DIYer or grease monkey. It really comes down to whether you think the added bit capabilities would solve a need for something small and easy to use when you don’t have proper tools handy. The bit driver is sticky, it takes a while to find the right tool for the application, and the bit holders make a bulky sheath even bulkier.

The pocket clip should be included at purchase or even baked into every Leatherman design, but it’s cheap enough that if you buy a tool such as the Wave+, you can throw in a pocket clip kit. We won’t be happy about spending a few bucks extra, but it does make the tool more useful.

The pocket clip should be included at purchase or even baked into every Leatherman design, but it’s cheap enough that if you buy a tool such as the Wave+, you can throw in a pocket clip kit.

The Drive’s editors aren’t psychic, so we scrolled through Google’s “People also ask” box for anything that may be lingering in your heads.

Q. What is the cost of the bit accessory kit and pocket clip?

A. The kit is about $24 from Amazon, and the clip is about $6 from the Leatherman website.

Q. Are there any other Leatherman accessories?

Q. Does Leatherman’s 25-year warranty apply to these accessories?

The Drive independently evaluates gear by putting products in the hands of subject-matter experts. The products we test may be purchased by The Drive, our staff, or provided for review by a manufacturer. No matter the source, our testing procedures, and our assessments remain free from third-party influence.

Let’s Talk: Comment Below To Talk With The Drive’s Editors

Your input and commentary are invaluable as we continue to grow our Guides and Gear section. Please give us your opinion in the comment section below, shout us out on Twitter or Instagram, or email us at [email protected]