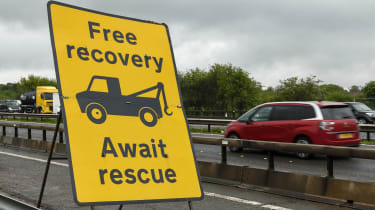 The number of vehicles recovered at the instruction of Highways England under ‘statutory removal’ powers has increased by a third over the last five years, with drivers paying £25m for recoveries, and road experts linking the rise of smart motorways to the year-on-year increases.

Statutory removal sees car drivers charged £150 to £300 for recovery from motorways and A-roads. Drivers have paid £25,257,000 for the practice over five years.

The 2008 Removal and Disposal of Vehicles Regulations grant traffic officers the power to order the recovery of a vehicle if it is judged to “cause obstruction” or is “likely to cause a danger” to other road users. The precise circumstances under which such criteria are met vary, but include drivers whose recovery firms will take too long (typically over an hour) to attend, broken-down or damaged cars on live lanes, or drivers with no breakdown cover.

Between 2015/16 and 2019/20 some 68,628 vehicles were recovered by statutory removal, according to figures released to Auto Express by Highways England under the Freedom of Information Act. The vast majority (61,498) were cars and vans weighing 3.5 tonnes or less. Drivers of these pay £150 to £300 for recovery, with higher charges for vehicles that are upside down or have crashed off the road, for example. Trucks weighing over 18 tonnes can cost up to £6,000 to be recovered, depending on if they are laden or unladen, if they are upright, and if they are on or off the road.

After statutory removal, vehicles are taken to what Highways England deems “an appropriate place”. This is “normally” a compound run by FMG Support, a private firm that is Highways England’s “recovery manager”. FMG Support charges storage fees of between £10 (for motorbikes) and £35 (for vehicles over 18 tonnes) a day, with car drivers charged £20 per 24 hours. Motorists are charged £50 to £150 (£75 for cars) for the disposal of vehicles that are not collected. All these charges are set by law, not Highways England or FMG Support.

Despite those £25million charges, though, Highways England was not able to fully recoup all the expenses associated with statutory recovery, with the practice costing the Government-owned company £30,713,000 over five years – a shortfall of £5,456,000, attributed to “issues around [the] level of information available and ability to enforce repayment.”

Highways England was unable to tell us on which roads recoveries took place, but said traffic officers “work hard” to keep traffic moving and drivers safe. It added: “Since the powers were introduced in 2008, the number of vehicles removed by Highways England traffic officers has increased annually. It is not possible to draw any conclusions from the data released, other than to note traffic levels have steadily increased since this time.”

Jack Cousens, head of roads policy for the AA, suggested the rise in recoveries “could be down to more live lane stoppages on all-lane running ‘smart’ motorways, which highlights the need for more emergency refuge areas.” He added that many stranded drivers “will only discover the charge when the traffic officer tells them what will happen”, while Highways England may be “concerned” the near-£5.5 million shortfall could draw money from “general maintenance funding”.

Opinion: “Highways England’s charges feel like another tax on the motorist”

While most drivers would agree that getting a stricken vehicle off a busy motorway or A-road is a priority, Highways England’s charges feel like another tax on the motorist. Perhaps more than that, this rise in revenue correlates with the rollout of smart motorways. It’s not much of a leap to suggest that when a vehicle breaks down in a live lane of a smart motorway, it’s far easier for traffic officers to deem it is causing an obstruction.

But Highways England simply hasn’t done a good enough job of publicising these bills, nor has it been effective enough at recouping its costs, leaving taxpayers saddled with a shortfall of almost £5.5m over the last five years.

Furthermore, the ‘Free Recovery’ signs that are frequently positioned at the start of contraflows, or in notorious bottlenecks, should be followed by signage highlighting the punitive charges.