According to a new analysis by The Zero Emission Transportation Association (ZETA), electric cars are saving owners money. More specifically, the money saved is attributed to operating costs, which comes as no surprise.

To be clear, the general idea here is not new news. We’ve shared comparisons time and time again showing how an electric car can be cheaper to own than a similar gas-powered car once you factor in long-term ownership costs. EVs are much more expensive up front, though they tend to save owners money on fuel and maintenance over the years.

If this wasn’t already provable in a growing number of cases, it’s becoming even more of a reality as gas prices soar. While electricity prices are also rising, they’ve remained relatively consistent over the years, with a more gradual rise. Meanwhile, gas prices have proven more volatile over time. Moreover, due in part to Russia’s invasion of Ukraine, oil prices have spiked to record highs, and gas prices are following suit. Executive Director of ZETA Joe Britton shared:

“This month’s Consumer Price Index shows once again that gas prices are surging, which has been exacerbated by Putin’s invasion of Ukraine. American families are losing money at the pump to a commodity that is increasingly unpredictable and unaffordable in an already-expensive pandemic year. Our analysis shows that American consumers don’t have to choose between driving their car or saving money. Electric vehicles are affordable now.”

Note that “affordable” is highly subjective here. Just because a family can potentially save money over time by choosing an EV over a gas car doesn’t mean it will prove true in all cases. In addition, if a car shopper simply can’t afford the upfront cost of an EV, they won’t be able to take advantage of the potential opportunity. Finally, even with high gas prices, it almost always makes sense to keep the car you already own, especially if there aren’t major issues with it. Buying a new car right now when inventory is scarce and prices are high may not be the best plan.

At any rate, ZETA put together a report comparing the operating costs of electric cars versus gas-powered cars. We’ll say right up front that these studies should always be taken with a grain of salt, though they do paint an interesting picture of the situation as it’s unfolding. Reports such as this typically rely on a small data set, and there are an immense amount of factors and variables involved.

If you’re interested in this topic, we suggest opening the full report yourself – which we’ve embedded at the end of the article – and diving into the data. This way, you can draw your own conclusions.

With all of that said, we will tell you that ZETA used three of the most popular gas-powered vehicles. It looked at a select number of US states and aimed to compare the operating cost of the gas-powered vehicles to that of similar EV models. ZETA claims its research suggests that, unlike gasoline prices, EV charging costs aren’t “dependent on global oil markets—and are therefore not subject to the same price shocks, disruptions, and supply shortages.” ZETA’s Joe Britton added:

“Instead, EVs run on electricity, which is cheaper than gasoline and is produced domestically from increasingly renewable and locally derived resources. As Congress moves forward to pass new transformative clean energy investments to electrify the transportation sector and bolster domestic auto manufacturing, EVs’ sticker prices and total cost of ownership will only continue to come down, paving the way for electric vehicles to become the new—and affordable—normal in the United States.” ‍

Based on the details in the study, ZETA suggests that as of March 2022, driving an electric car is significantly less expensive than a gas-powered equivalent. The EV advocacy group goes so far as to say that “EVs are 3-5 times cheaper to drive per mile than gas-powered vehicles.” It adds that in some states, the savings appear to be even higher.

ZETA mentions earlier data from Consumer Reports that claimed EV owners were saving between $6,000 and $10,000 over the lifespan of the car as compared to gas-powered vehicles. The CR report was published in late 2020 when average US gas prices were much lower than they are today, though several more expensive EVs have also come to market since then, and electricity prices have risen slightly.

We’ve included just a few of ZETA’s graphics below. Again, it’s important to consider the big picture here and not treat the research and graphics as indisputable facts. 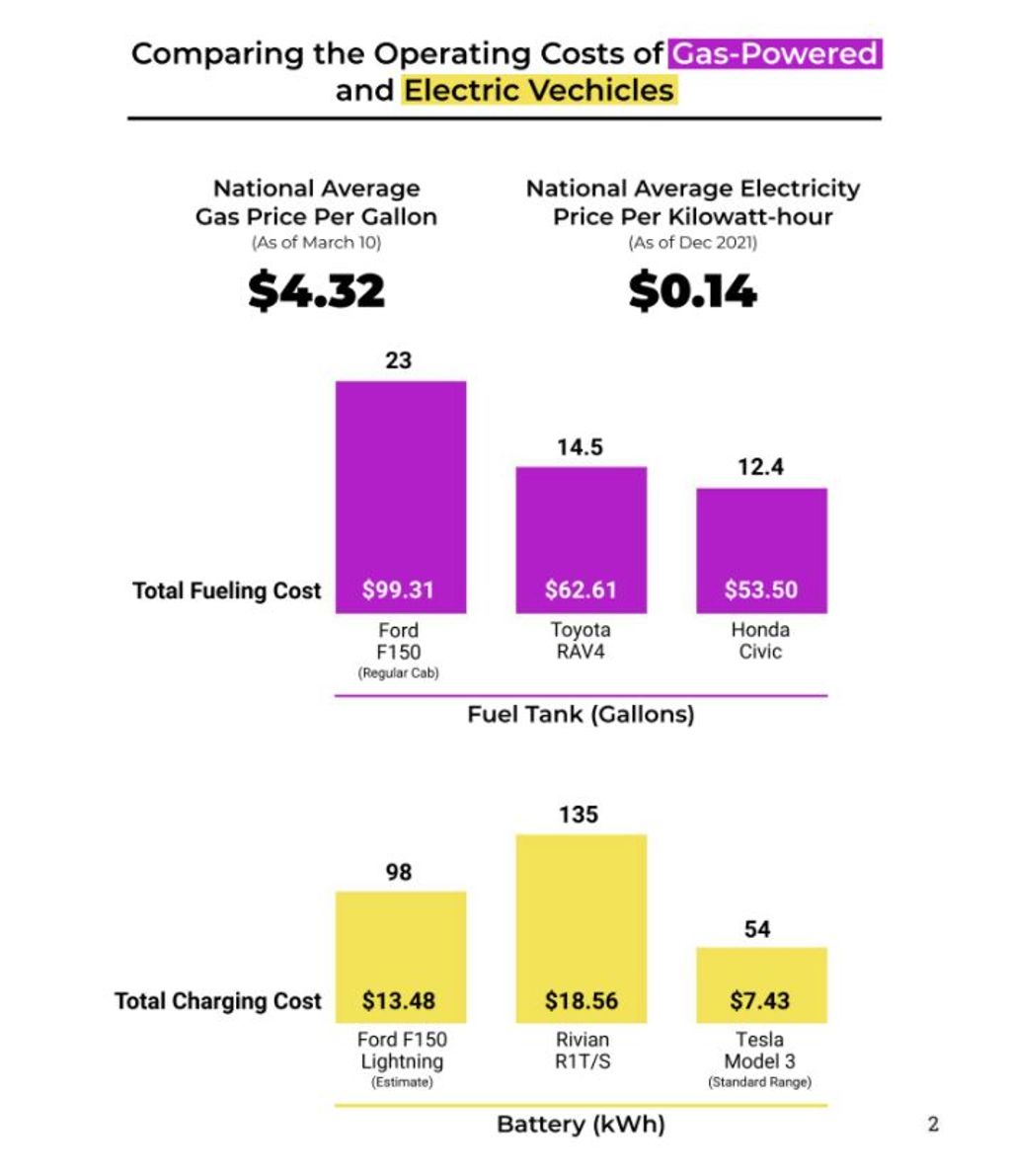 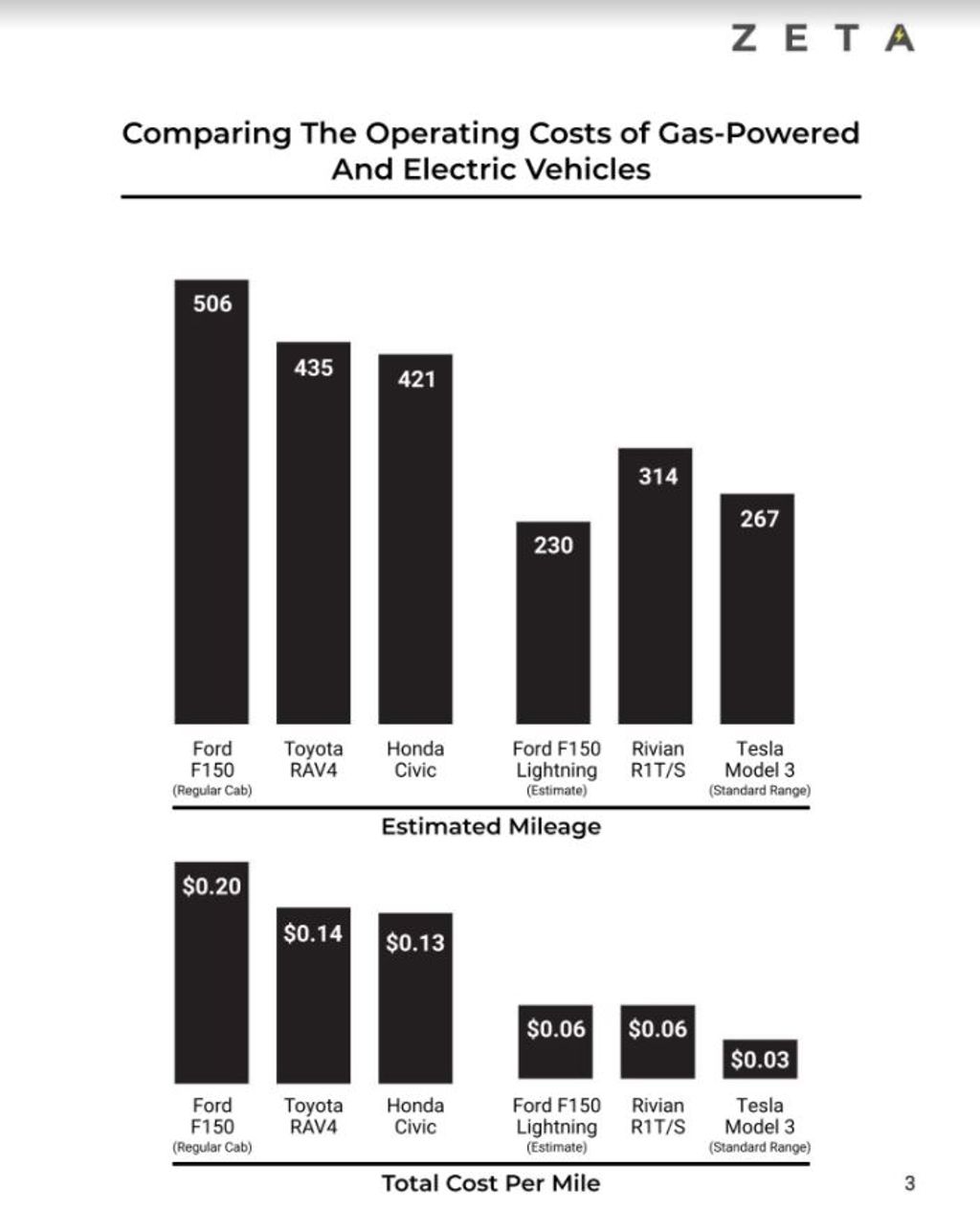 To check out ZETA’s report in its entirety, follow the link to the PDF below. Then, head down to our comment section to share your takeaways: