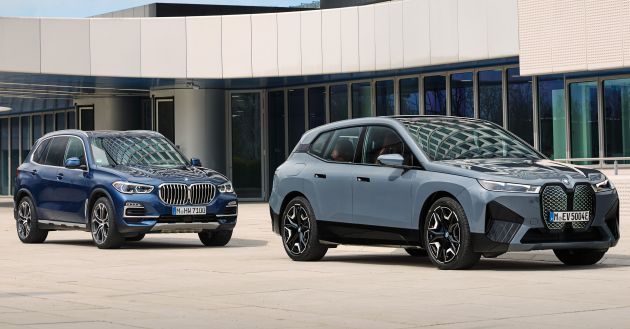 So often, the discussion of electric vehicles in Malaysia centres around the (relatively high) initial purchase price – although the new BMW iX bucks this trend. But we tend to overlook the fact that maintenance costs are also a big consideration when we buy a certain car, as they take up a significant chunk of our outlay over the entire life of the vehicle.

So our interests were piqued when BMW Group Malaysia released pricing for its extended warranty and service packages for the iX – they give us a rough idea of how much cheaper it is to maintain an electric vehicle vis-à-vis a comparably priced and sized petrol vehicle. But there’s a catch.

The iX is around the same size as the X5 and is priced around the same ballpark, so it makes sense to compare the two. Even with an extra year added to its service package, the iX’s six-year plan is considerably cheaper than the X5’s five-year offering, at RM5,800 versus a whopping RM12,600. This averages out to RM967 a year for the iX and RM2,520 a year for the X5 – a saving of more than 60%.

Of course, these are packaged prices; the difference between the two may vary depending on the individual service. You’ll also have to consider the fact that the costs may not be split evenly each year due to the scheduling of minor and major servicing – especially since BMW uses an on-board Condition Based Service (CBS) system for determining when a car needs to come in, rather than the usual mileage-based schedule.

Still, it’s a fairly accurate look at the servicing and maintenance costs of an EV versus a car powered by an internal combustion engine. We should also point out that while the X5 is a plug-in hybrid, the pure petrol-powered X6 has the same service package price, so it’s not the case of the hybrid powertrain being more complicated to service and maintain.

This tracks with the notion that EVs are generally cheaper to maintain compared to their ICE brethren, with fewer mechanical parts to be taken care of and no engine oil changes to consider (which is why there’s no 100,000 km mileage cap for the iX’s service package, like there is for the X5).

Even the brakes will wear at a much slower rate thanks to the motor’s regenerative braking taking up much of the deceleration duties. We’ve even had some experience in this regard, running a Tesla Model S 90D for three years without having to service the car once. So it looks like you can really have your cake and eat it too – and that’s before you count how much cheaper it is (for now, anyway) to run your car with electricity rather than ever-more-expensive petrol or diesel. So, you might be wondering, where’s that catch I was talking about at the start of this article?

It’s a small one, but make no mistake, it’s there – when parts on the iX do start to fail, replacing them may be slightly more expensive compared to fixes on the X5. The five-year, unlimited-mileage warranty package on the iX costs RM12,500, whereas the same product for the X5 is priced at RM10,600.

That’s a negligible difference in the long run, especially at the prices these cars command in the first place. But it does suggest that if anything were to go wrong, the parts for the iX will be more expensive. Not by much, but it’s something to consider nevertheless.