A nine-speed automatic transmission hides under the stylish skin.

The current Infiniti QX60 is an anonymous entry in the midsize luxury three-row SUV segment, partly due to its rounded styling and partly to a droning, continuously variable transmission. Luckily, there’s a new model on the horizon (previewed by the QX60 Monograph), and it promises to be a wholesale improvement. The 2022 Infiniti QX60 should impress customers with sharp new interior and exterior styling, plus a nine-speed automatic transmission.

There’s a lot about the new QX60 that’s unchanged from its predecessor, including a 3.5-liter V6 with 295 horsepower and 270 pound-feet (220 kilowatts and 366 newton-meters), which is only slightly revised with idle-stop and retuned valve timing. The 2022 model also uses a version of the old QX60’s architecture, updated with additional high-strength steel and other materials for more stiffness. Luckily, Infiniti gave the new crossover its own identity distinct from both the outgoing model and the current Nissan Pathfinder, with which it shares that enhanced platform.

That starts up front, where the 2022 QX60 gets updated styling reminiscent of the QX55 fastback SUV. The larger front grille features a texture that’s meant to recall origami, while narrowed headlights feature “digital piano key” segmented LED accents (first seen on the QX60 Monograph concept) and a unique reflector texture inspired by the folds of a kimono. Vertical vents on the bumper corners look surprisingly subtle, though the same can’t be said of the split skid plate below the grille – it stands out, but not necessarily in a good way.

The side profile is the only place where the QX60 looks related to the Pathfinder, primarily in the bulging design of its front and rear fenders. Connected by a subtle crease on the doors, these fenders nonetheless give the new crossover more aggression than its bulging, ovoid JX35 and QX60 predecessors. The caliper-shaped window trim says goodbye to crescent-cut window styling, but it’s still quite attractive. That said, the tapering roofline and invisible B, C, and D-pillars look derivative of the Lincoln Aviator, but if you’re going to copy someone’s homework, the stylish American SUV isn’t a bad target.

Around back, the QX60 is pure Infiniti, with wing-shaped taillights that repeat the front signature lighting’s piano-key segments. A wordmark shows up on the hatch face, with the corporate “Infinite Road” badge appearing just below the rear window. Unfortunately, the rear bumper makes use of the same odd two-piece skid plate garnish as the front, looking tacked on and poorly integrated. Otherwise, the QX60 is very attractive, particularly sitting on 20-inch machined wheels and painted a lustrous Moonbow Blue.

Inside is where the crossover’s new-for-2022 Autograph flagship trim level really comes into its own. Genuine open-pore wood trim and semi-aniline leather upholstery banish any resemblance to the Pathfinder, as do double-quilted accents on both the dash fascia and the seat faces. Sharp new cabin styling imitates the flowing, distinctly Japanese QX50 and QX55, with a cantilevered center stack and sliding electronic gear selector. And the Autograph trim’s standard second-row captain’s chairs are heated and ventilated, like the front seats, with a removable center console for more storage.

Luckily, the 2022 QX60’s standard infotainment package is an improvement over those models’ twin-display setup, making use of a single 12.3-inch touchscreen mounted at the top of the center stack. It runs Infiniti’s latest infotainment software, which is easy to navigate and quick to respond in other corporate products. Wireless Apple CarPlay and wired Android Auto are standard, with seven USB ports (both USB-A and USB-C) scattered throughout all three rows. An available 12.3-inch digital instrument cluster makes monitoring the QX60’s suite of driver-assistance features easier thanks to crisp graphics and decent customization.

New to the QX60 is ProPilot Assist with Navi-Link. Like other Nissan and Infiniti ProPilot systems, it combines lane centering, lane departure intervention, and adaptive cruise control into one function, reducing driver fatigue on the freeway by keeping the vehicle well distanced from obstacles and other cars. However, Navi-Link takes things to the next level by actively slowing the QX60 in advance of freeway curves, and it also can read speed limit signs to change the crossover’s set speed automatically. It’s not clear whether all QX60 trim levels will get these driver-assist features standard, but the Autograph almost surely will.

We don’t have many complaints about Infiniti and Nissan’s long-running VQ series of engines, so the aforementioned 3.5-liter V6 should be a decent road trip companion. However, the ZF nine-speed automatic transmission, which replaces the outgoing QX60’s CVT, should be a vast improvement. It’s likely the same gearbox we experienced in the Pathfinder, where we admired its intuitive shift behavior and decent responses, and as on the Nissan, the transmission allows the QX60 to tow up to 6,000 pounds properly equipped – 1,000 more than last year’s model.

The revised platform’s added stiffness should help tow that weight more confidently, also providing a secure, well-tuned ride when unladen. Here again we can make some assumptions based on the mechanically similar Pathfinder, which was both more comfortable and more fun to drive up a mountain highway than expected.

Unlike the eight-seat Nissan, the 2022 Infiniti QX60 is a seven-passenger vehicle, with a two-position rear bench that preserves room in the middle for a little storage bin and presumably some added shoulder room. The standard second-row bench gives way to an optional pair of captain’s chairs (standard on the Autograph, as we mentioned). One carryover feature from the old QX60 is the standard tip-forward second row, which allows access to the third row even if a child restraint is installed on the LATCH tethers. Infiniti is proud of this feature, saying that it is a leading reason for purchase for many of the SUV’s current customers.

Infiniti claims the new QX60 has more “hip-to-heel” room in the second and third rows, improving passenger comfort. However, in spite of an incrementally longer wheelbase and wider track, overall interior volume is down to 140.6 cubic feet from the 2020 QX60’s 149.0 cubes. Luggage room with the third row stowed is 41.6 cubic feet, up 1.1 over the outgoing SUV, but all other cargo metrics are down. Behind the third row, there’s just 14.5 cubic feet of space, though a 1.9-cube underfloor cargo bin helps matters somewhat. As such, it’s best to think of the QX60 as a spacious vehicle for four or five, rather than a road trip–ready seven-seater.

Coming Soon To A Country Club Near You

Although the QX60 Autograph we saw in person was production-intent, we’re still a few months away from seeing these vehicles in our local dealerships. The company is targeting an on-sale date near the end of the year, announcing pricing, feature availability, and trim breakdowns closer to that time. Regardless, the 2022 Infiniti QX60 should continue to be the company’s best-selling product, thanks to handsome new styling, an attractive interior, and hopefully improved driving dynamics.

Going against an ever-improving cadre of rivals like the new Acura MDX, facelifted Buick Enclave, sterling Lexus RX, and upstart Hyundai Palisade Calligraphy, the three-row Infiniti needs all the help it can get. Luckily, the 2022 QX60 is a wholesale improvement over the vehicle it replaces, hopefully attracting premium shoppers while retaining current Infiniti devotees. 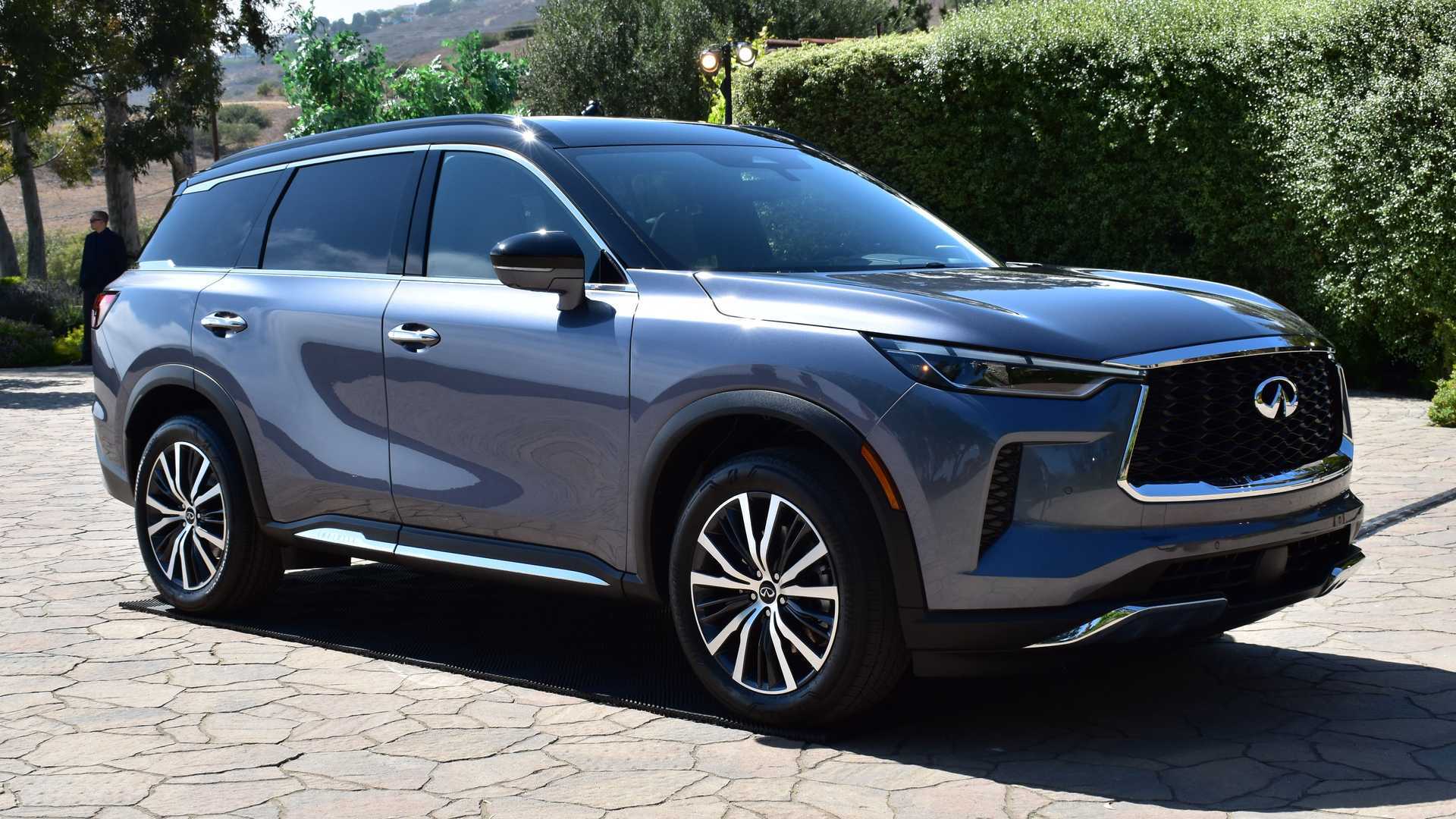 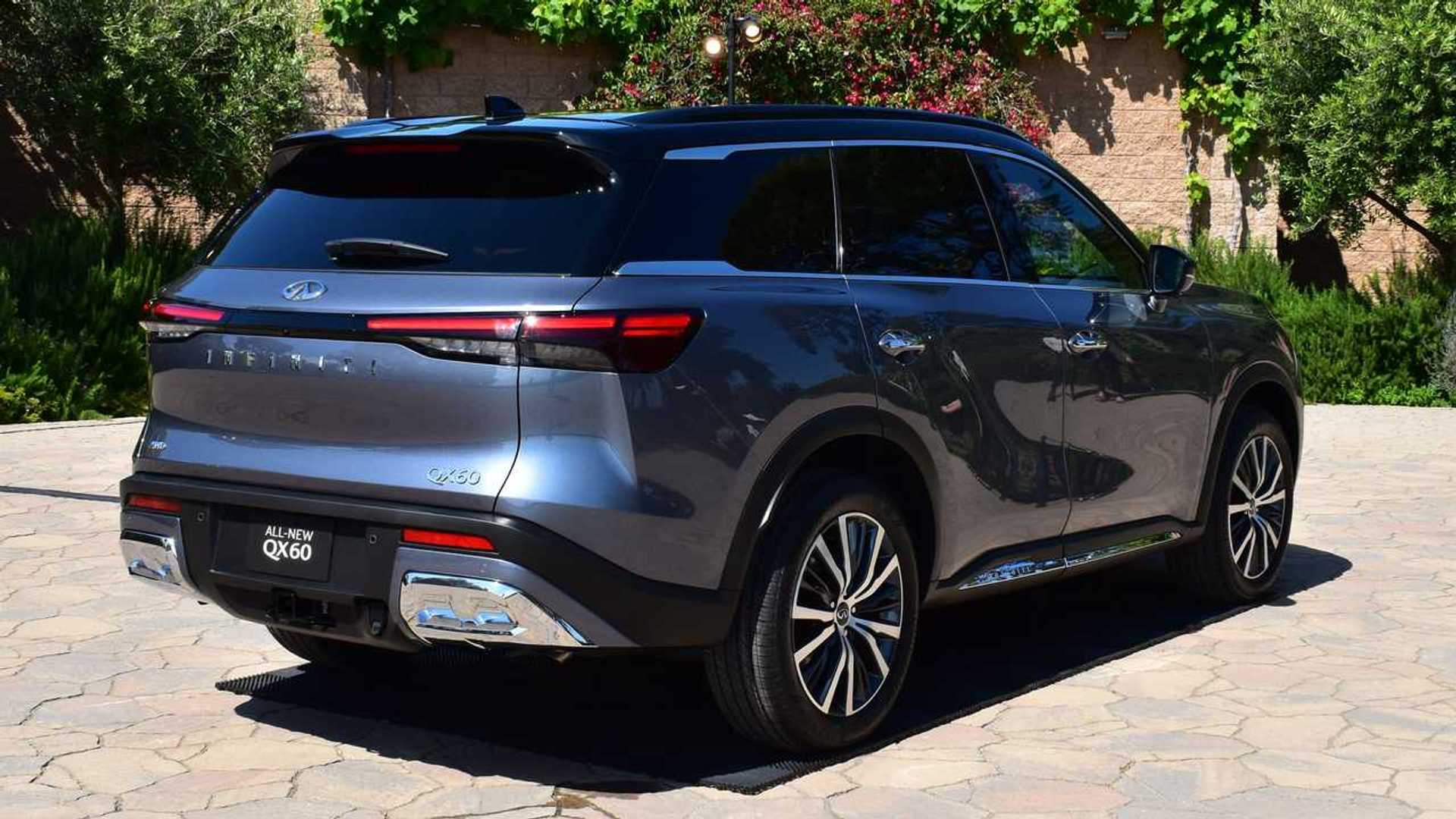 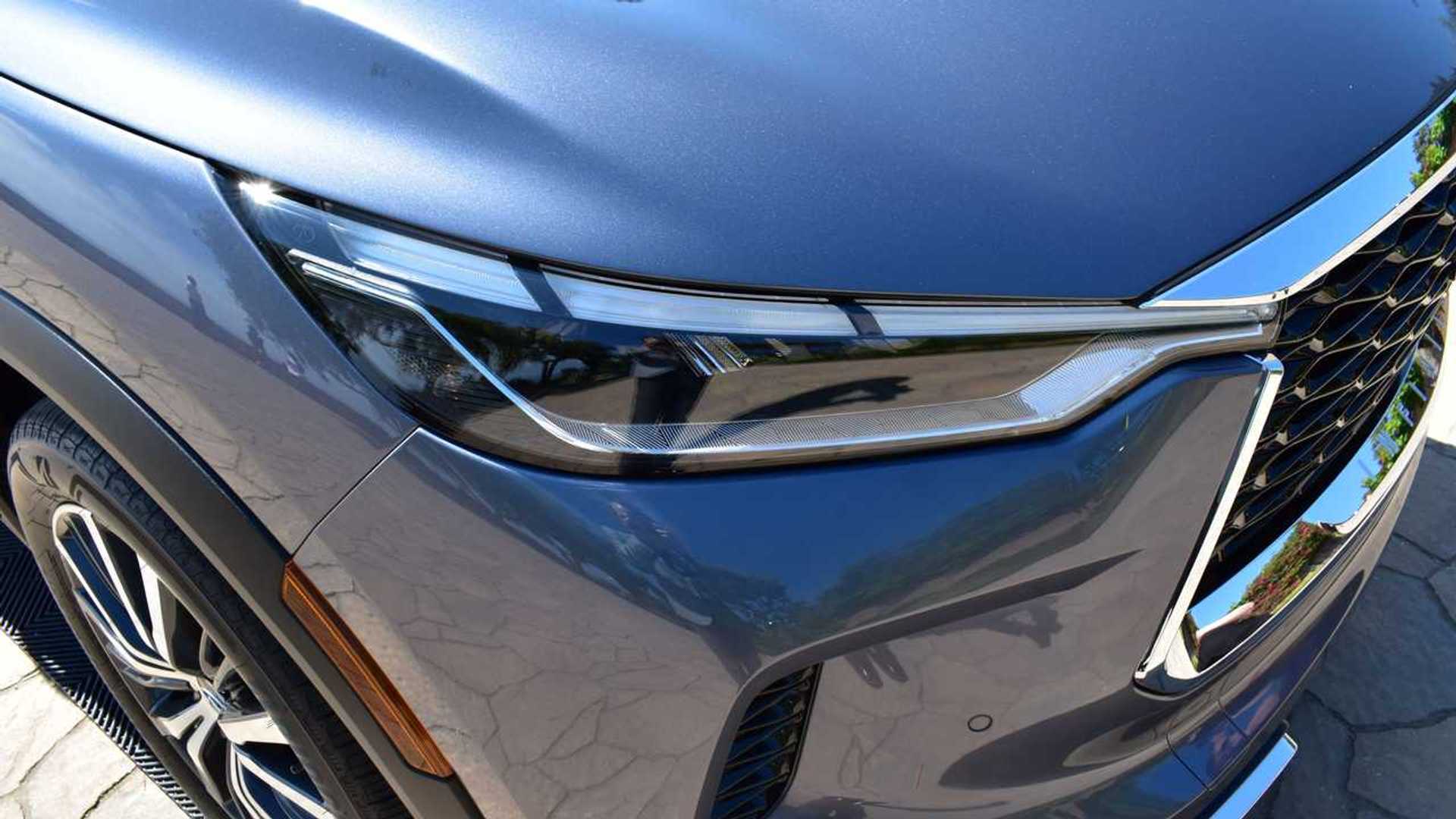 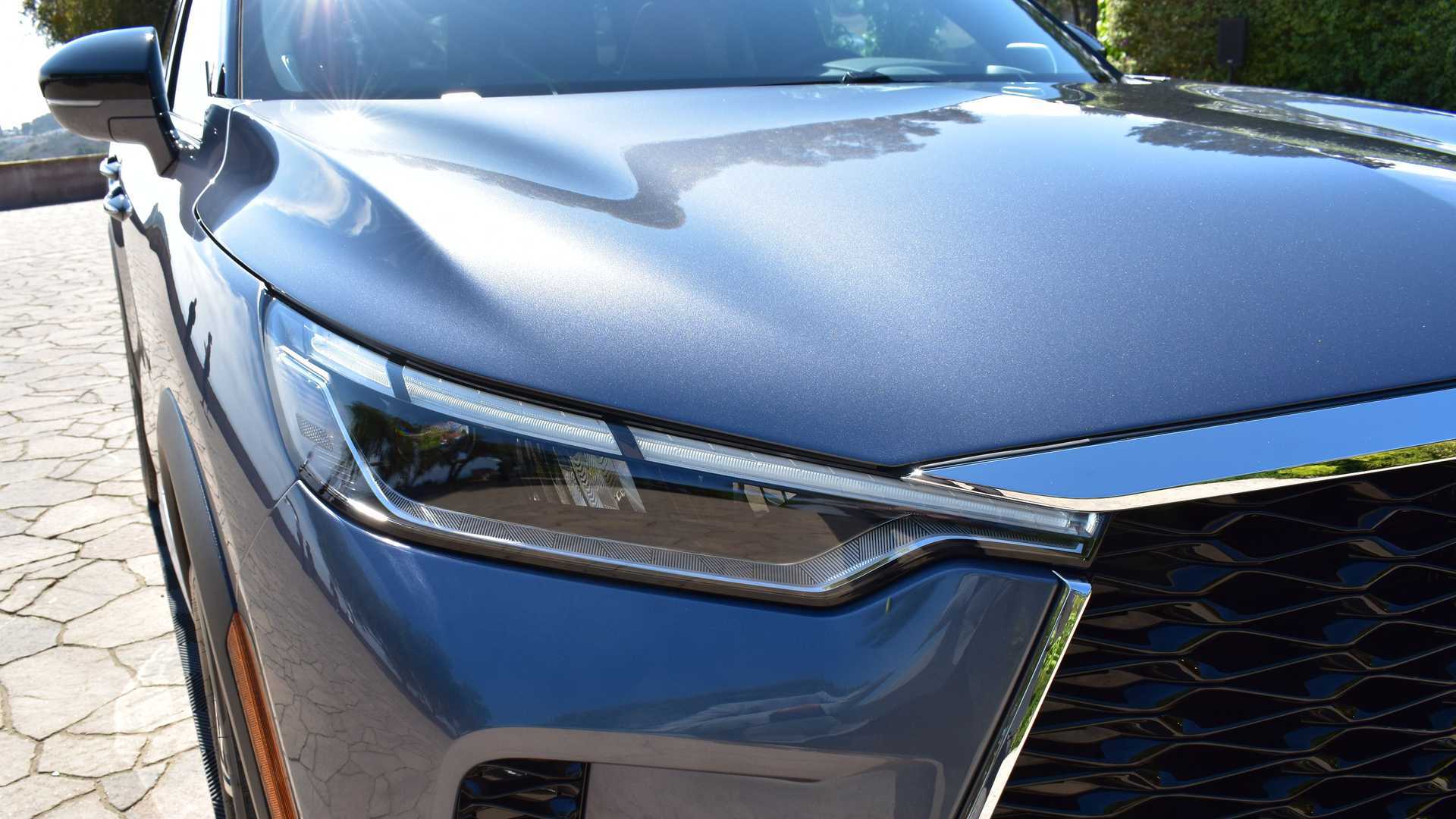 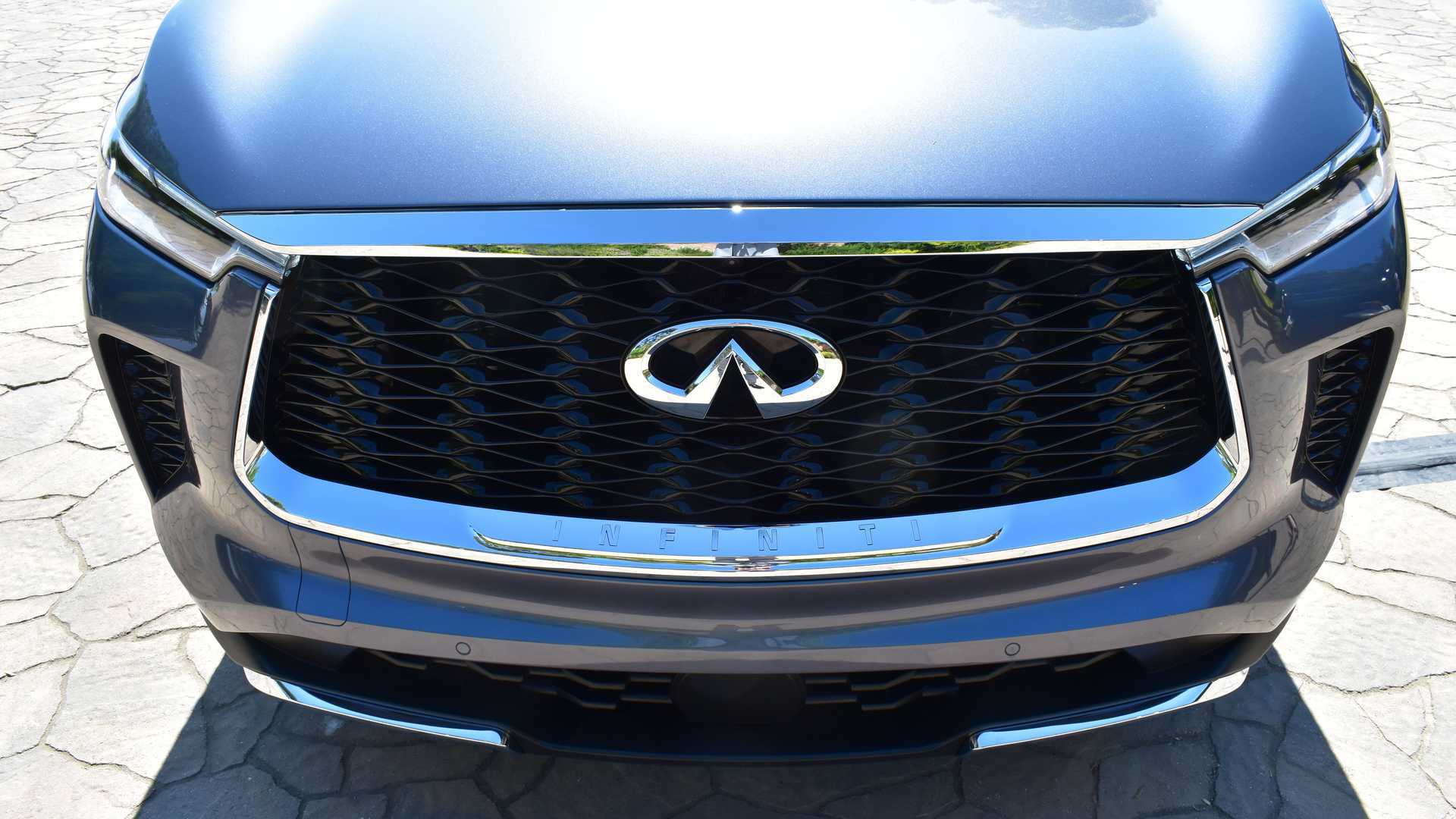 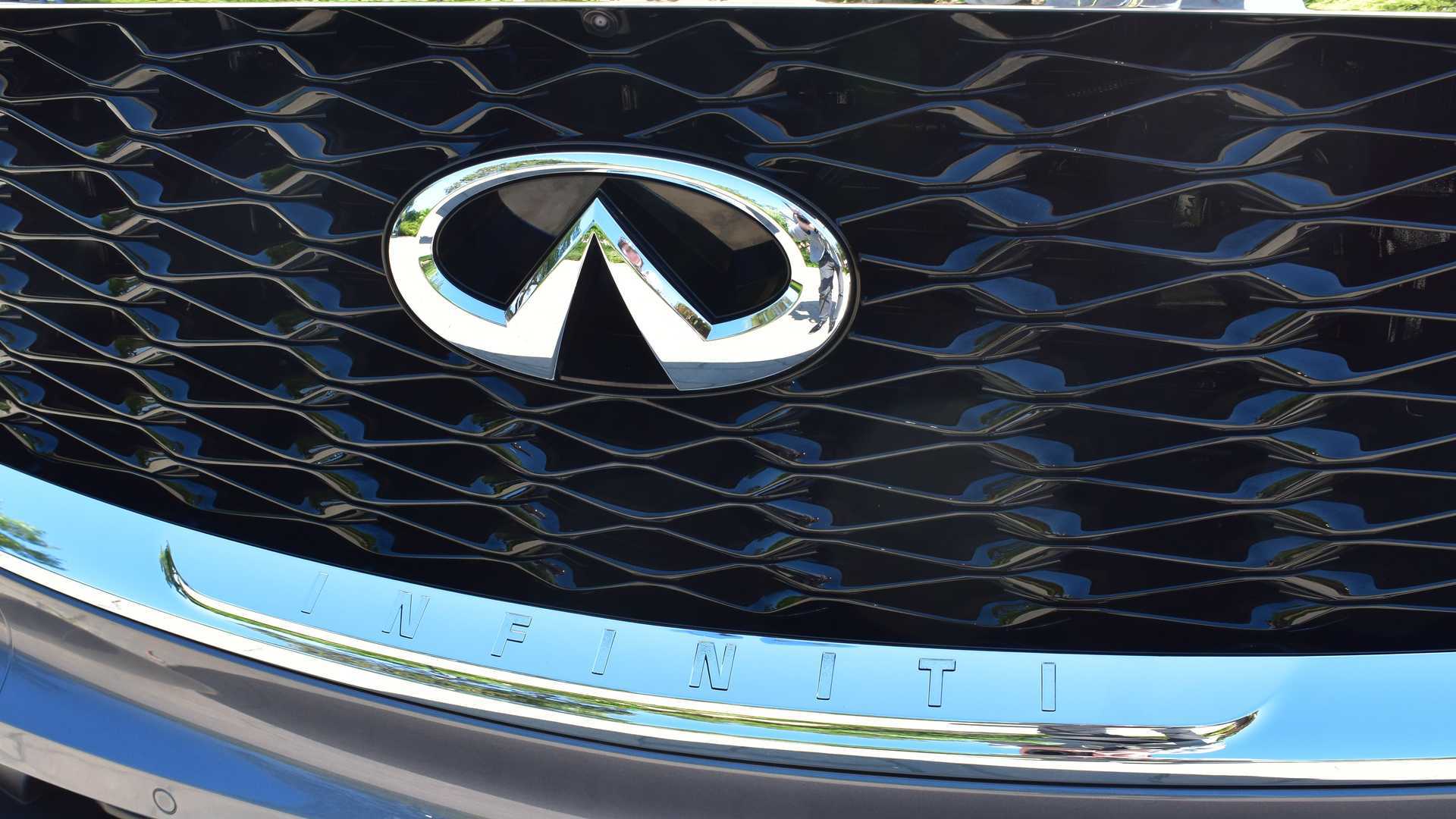 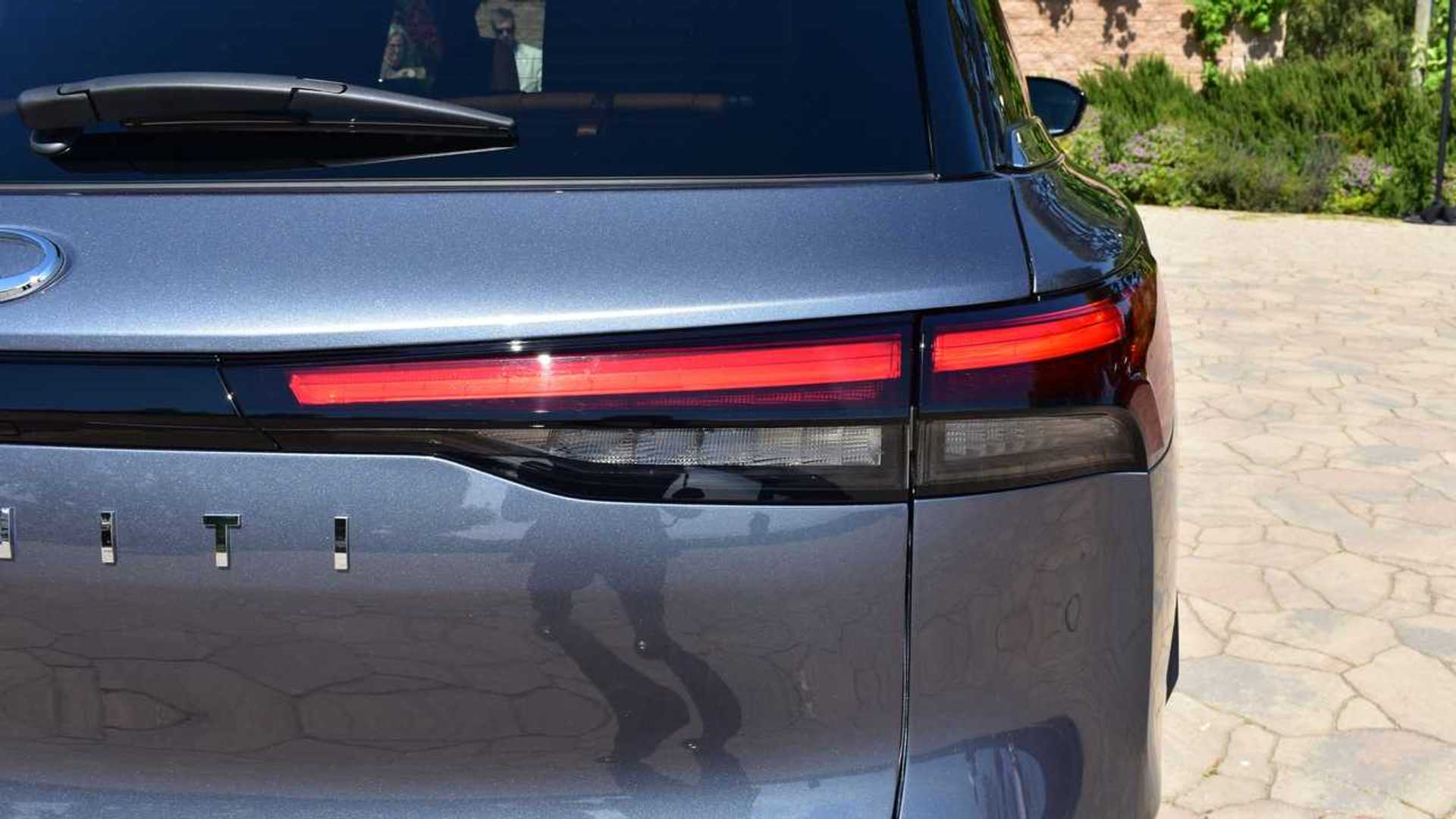