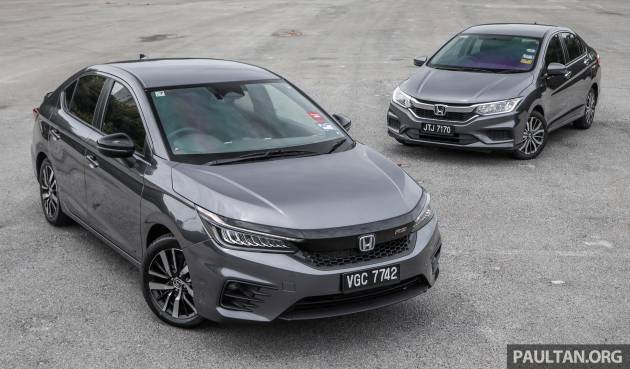 You’ve seen the comparison of the currrent Honda City and Toyota Vios yesterday, where we put the latest, sportiest and costliest variants of the two B-segment sedan stalwarts side-by-side. The top City you can buy today is the RM106k e:HEV RS Hybrid, while Vios range topper is the RM95k GR-S. Gazoo Racing is now the sporty brand for Toyota, replacing TRD Sportivo in our region.

Check that one out if you haven’t already done so, but for a sizeable portion of B-segment sedan buyers – those who have already set their minds on the Honda – perhaps they’ll be asking themselves – which City?

For this, we brought two hybrids to the party, and we’ll start with a recap of the previous generation car, which was in local showrooms till 2020. This City Hybrid was launched in July 2017, a few months after the facelifted GM surfaced in Malaysia. Priced at RM89,200, it slotted between the RM84,600 mid-spec E and the RM92,000 top-spec V. By the way, Malaysia was the only market outside of Japan to officially introduce this car – the JDM Grace Hybrid was launched in the same month.

Like its Jazz sister, the last-gen City Hybrid had a Sport Hybrid i-DCD (Intelligent Dual-Clutch Drive) system combining a 1.5 litre engine with a seven-speed dual-clutch automatic gearbox with an integrated electric motor, a lithium-ion hybrid battery and an electric driven compressor.

The Atkinson cycle DOHC i-VTEC engine puts out 110 PS and 134 Nm of torque. Together with the 30 PS (22 kW)/160 Nm e-motor, combined output is 137 PS and 170 Nm. Honda claimed that the Sport Hybrid i-DCD delivers performance equal to that of a conventional 1.8 litre NA engine, but with much lower fuel consumption. The claimed official FC figure is 3.9 litres per 100 km, or 25.6 km/l. No reduction of capacity for the mega sized boot – still 536 litres.

The latest GN generation City was launched here in October last year. The e:HEV RS Hybrid was used as the hero car for the ads and launch event, but it wasn’t until March 2021 that it went on sale. This time, the Hybrid is the range topper, and a clear one too in terms of appearance (RS), specs and price (RM105,950 with SST exemption).

It’s all new under the hood, with a complete shift in how things work. Instead of the electric motor assisting the ICE, like in the old IMA and i-DCD, the e:HEV’s two-motor i-MMD hybrid system uses the 108 PS/253 Nm electric motor to move the car most of the time. Meanwhile, the 98 PS/127 Nm 1.5 litre Atkinson-cycle i-VTEC engine is used mainly as a generator to charge the battery, which powers the motor. Total system output is 126 PS.

The ICE can also clutch in via a single-speed transmission (no more DCT) to drive the car directly at higher speeds, where it is most efficient. During high loads, such as when overtaking, both power sources can be called upon for max acceleration. Because the ICE powers the car directly in certain situations, i-MMD is unlike Nissan’s e-Power range extender EV system.

MMD stands for Multi-Mode Drive, and there are three drive modes. The car always starts off in EV Drive mode, in silence. You’ll hear the engine spring to life occasionally to recharge the 1.3 kWh lithium-ion battery, which powers the traction motor.

During full acceleration, you’ll enter Hybrid Drive mode. The traction motor is still the main mover here, but the engine will rev higher to pump more juice into the battery. Engine Drive is when the engine takes over from the traction motor to power the wheels during high speed cruising.

While Honda previously used a 1.8L NA engine as acceleration comparison for the i-DCD, the company went as far as using the Toyota Camry – which has a 2.5L NA engine – in its ads for the City e:HEV RS Hybrid. More important for a hybrid is economy, and FC is rated at 3.77 litres per 100 km, or 26.5 km/l. That’s an improvement, but the new City Hybrid’s IPU (intelligent power unit) is located at the rear, which reduces boot volume to 409 litres (down 110L). It also comes with a tyre repair kit in place of a space saver spare wheel.

The hybrid only takes up a small proportion of City sales – most go straight to the 1.5 litre i-VTEC NA engine, which makes 121 PS/145 Nm. Now a DOHC unit with VTC, it’s mated to a CVT gearbox.

The fifth-gen GN City 111 mm longer (4,553 mm) and 54 mm wider (1,748 mm) than the sedan it replaces. The larger footprint is coupled with a 10 mm lower height, and an unchanged wheelbase of 2,600 mm long. You can see here that shapes of both cars are slightly different.

The GN has a taller front end (plus a prominent ‘forehead’), and from there, the belt line that connects head to tail lamp is straight. Likewise, the windowline. In contrast, all the profile lines on the GM are rising towards the back, which is taller at the boot than the new car. This is obvious in the side-by-side pics, along with the new car’s slightly lower roofline. No one would be mistaking these two City generations for one another, even in the same Modern Steel Metallic grey. Looks wise, which do you prefer?

Finally, price. The new City e:HEV RS Hybrid shocked some when its RM105,950 price was announced. That’s understandable, because it’s over the RM100k mental barrier that we have for CKD B-segment mass market cars, and we’ve been conditioned to expect low prices for hybrids. 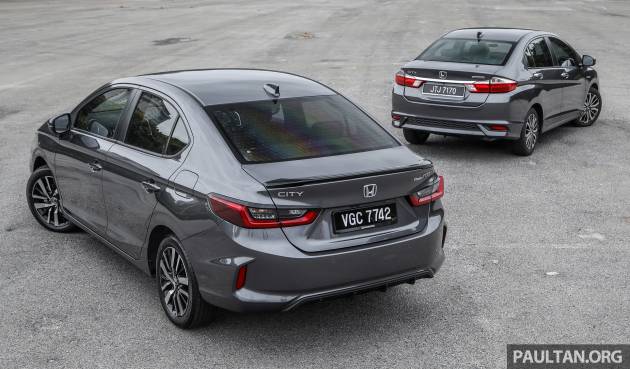 This is a Malaysian consumer quirk, as hybrids pack in more hardware and tech, and they naturally cost more than a regular ICE version. Honda Malaysia has revealed before that the GM Hybrid would have been priced above RM100k if not for hybrid tax incentives. Typically, hybrids are also positioned at the top of the range, which the e:HEV RS is now.

Perhaps not the best City in terms of value, but if you’re intrigued by the e:HEV RS Hybrid’s eco tech, you’ll also be treated to a very safe and well-kitted family car, and one that can ahem, outrun D-segment sedans with big engines too!