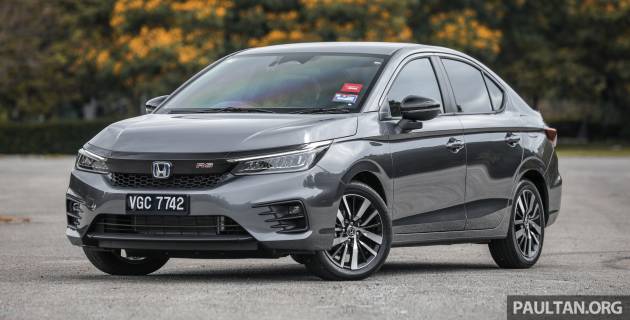 During the launch of the City Hatchback today, Honda Malaysia announced that it has sold over 22,000 units of the latest fifth-generation sedan model since its launch in October last year. Of those, less than five per cent were of the range-topping e:HEV RS hybrid, the company revealed at a press conference.

Of course, the e:HEV did miss out on five months of sales, having only been offered on the market from March. The hybrid is also far and away the most expensive model in the local City range – at RM105,950, it’s over RM19,000 pricier than the next closest variant, the petrol-powered 1.5 V. The latter has closed the gap slightly with a new Honda Sensing-equipped version, but at RM90,212 it’s still nearly RM16,000 cheaper.

Another possible factor is that the e:HEV powertrain’s operation is very different from the petrol engines that Malaysian customers are used to, and even most hybrids. Most of the time, the car is powered by a 109 PS/253 Nm electric motor, juiced by a 98 PS/127 Nm 1.5 litre Atkinson-cycle i-VTEC engine. The latter can also clutch in at higher speeds to provide motive power and assist the motor under hard acceleration.

The sales performance and customer reception of the e:HEV model is at least in line with Honda Malaysia’s expectations, said executive coordinator Yujiro Sugino.