You’re finally setting up your first garage, and everyone is telling you to get an air compressor. It’s annoying, right? Not just because you’re being told to make a costly investment on top of all of the other things that are sucking up your cash flow, but because nobody is giving you the answers you really need to make the right decision—or, really, if you even need one.

The thing is that there’s no universal discussion about air compressors. Different folks use different tools for different jobs, and that all factors into what compressor is necessary for them. In other words, your buddy who’s painting his car that he just rebuilt from the ground up needs a different compressor than your buddy who just tinkers. 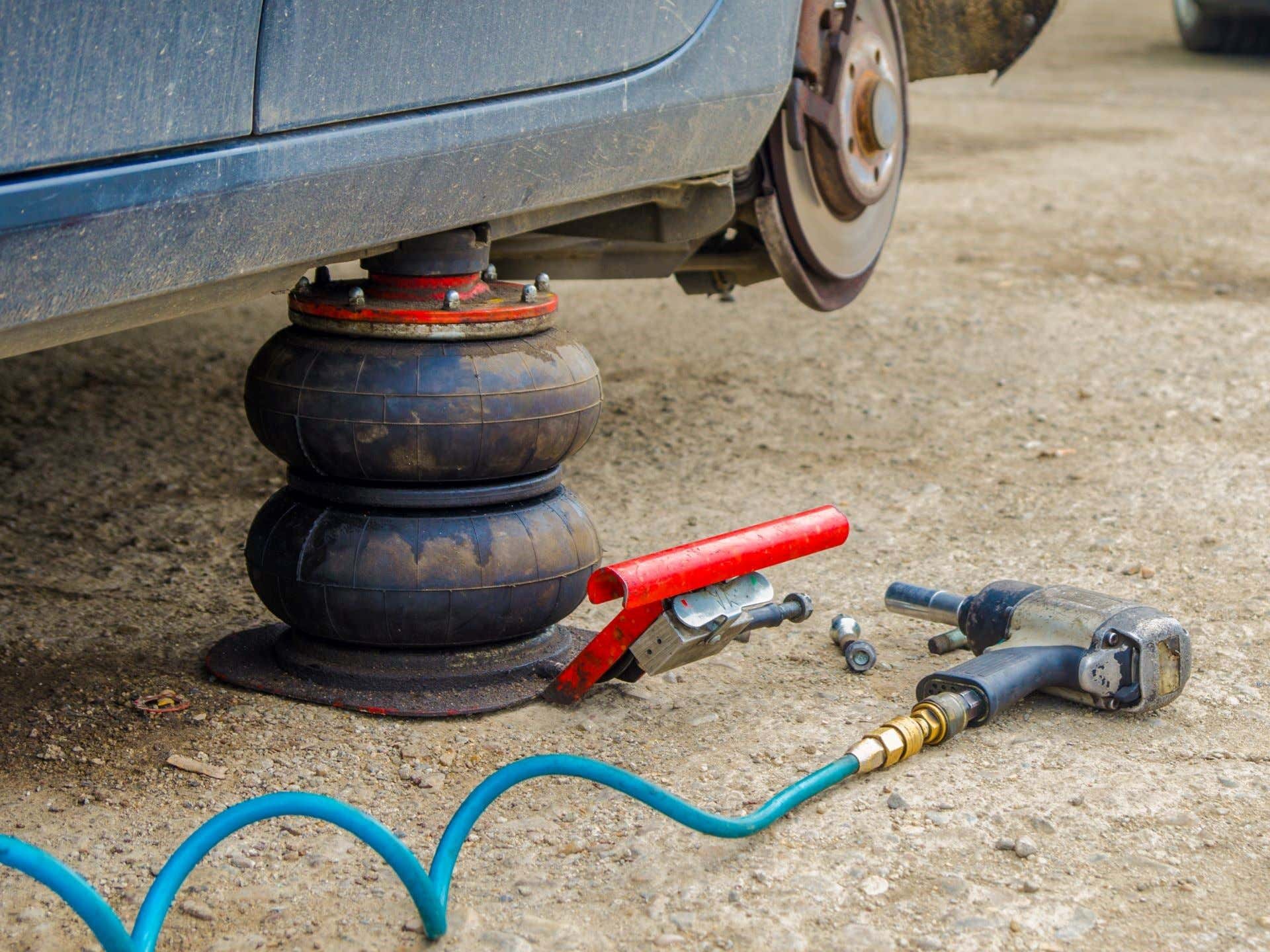 So, where do you fit in? Well, we don’t know. But what we do know is that The Drive’s got its tool nerds on the job to help you find out!

What Is an Air Compressor

Compressed air is an amazing thing. By increasing air pressure and attaching it to a system designed to harness it, the air in the rooms suddenly acts as fuel to operate various tools. The thing is that pneumatic tools need a lot more pressure than a simple air pump can generate. That’s why a shop air compressor essentially combines two different systems together to make one magnificent monster.

Shop air compressors work with an air pump and a tank. That air pump draws air in and forces it into the holding tank that builds up the pressure you need to operate your tools. While there are variables to consider, the general operation really is that simple.

But, before we move on, we should talk about the three primary types of pumps you’ll find on a shop air compressor. Not just because it satiates the tech nerd in us all, but because the kind of pump used gives us a good idea of the type of performance the compressor can deliver.

The most basic compressor pump is known as a reciprocating pump. This system features a single piston that draws in air through the inlet valve on the inlet stroke and pushes it through the outlet valve and into the tank. Sound familiar? It should. This system is almost identical to what you’d find in the engine of your car.

A multistage pump is essentially a bigger and better version of the reciprocating pump. The most apparent difference between the two is that it features two pistons. Only, the second piston isn’t used to draw in more air, instead, the second piston is smaller than the first and is used to cool the air. By cooling the air down, you increase the density and can therefore achieve greater pressure in the tank.

Rotary pumps work to compress air by drawing it in and squeezing it through two interlocking rotors. If you’re a boost nut, you’ll recognize that this system is suspiciously similar to what is featured in twin-screw superchargers. This design doesn’t create quite as much pressure as what you’d get with a reciprocating design, but it runs cooler, quieter, and sees less wear and tear, making it a favorite for settings in which the compressor sees continuous use. 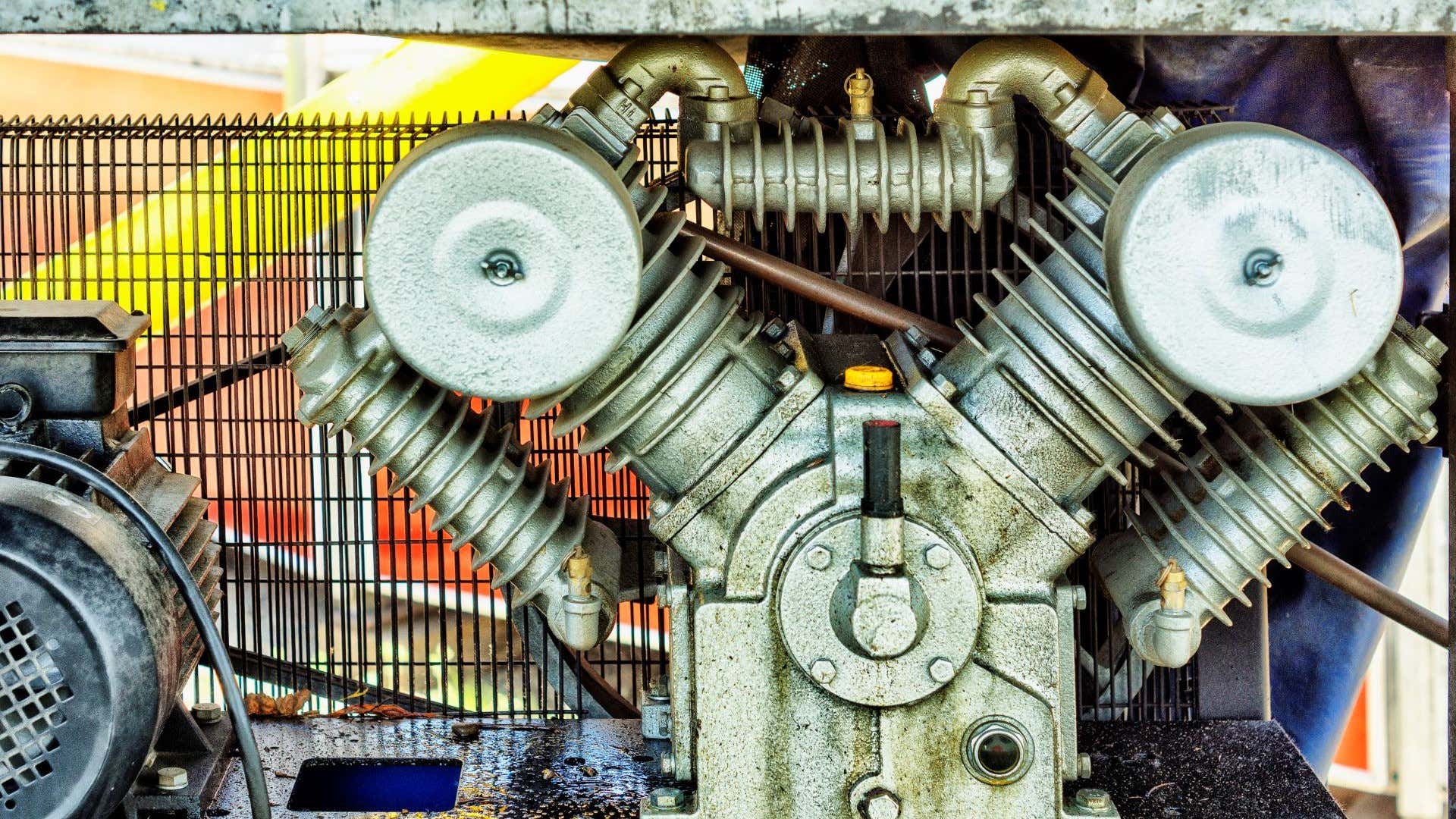 The tank captures everyone’s attention, but the motor on top is the real work horse.

Do You Need an Air Compressor?

As we know, air compressors are necessary to power pneumatic tools. If you’re a painter, you already know that you need a compressor to spray down coatings. But things might not be so clear if you’re just looking to invest in tools that have electrically powered counterparts.

So, do you need one? I won’t sugarcoat it. Unless you have an interest in investing in tools that must rely on compressed air or work in a professional setting, you technically don’t need one.

Pneumatic tools are notoriously powerful, they’re lightweight, they last forever, and you can control the amount of air they are receiving to dial in the power output. Pound for pound, they are faster, stronger, and lighter than electric tools. However, that isn’t to say that electric tools aren’t catching up or that there aren’t disadvantages of pneumatic power. The facts are that pneumatic tools always have an air line connected, they’re rather costly, and they might not always see use when you already have electric power tools that you’re accustomed to using.

The author’s personal take? You have a car, which means you need an air compressor. Why? To fill the tires. This is a subjective stance, but if you’re going to purchase a compressor for tire maintenance, why not consider getting your hands on one that will allow you to expand your arsenal?

(Ed. Note: Eh, you can get away with electric tools.)

What is the difference between CFM and PSI?

CFM (cubic feet per minute) refers to the amount of air that can flow, while PSI (pounds per square inch) refers to the pressure of that air. A good way to think about this is by thinking of CFM as the volume of air being moved while the PSI is how hard it’s hitting. It’s important to remember that even though these values are linear, they are not the same. 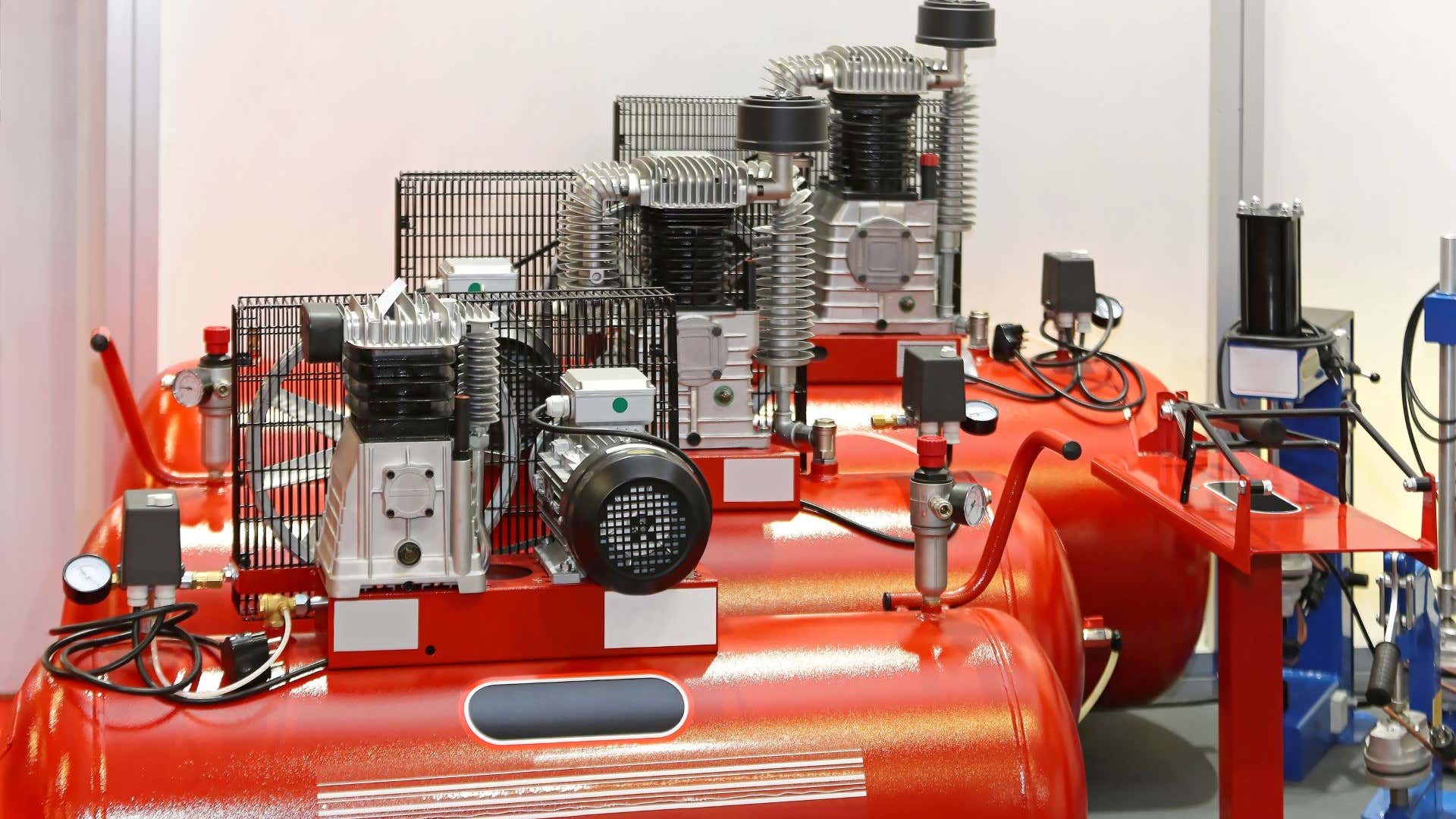 Chances are that you don’t need a massive tank, but it’s worth considering something bigger than you’ll need right away.

What Size Compressor Do I Need?

It’s easy to get sucked into tank size while shopping, but that’s not the first detail you should consider. Instead, you should look at the pressure and CFM the system can supply. You’re likely to use larger tools that use high volumes of air at greater pressures in a shop. Something like 10 PSI with 120 CFM is typical, so you need to look at systems that can supply you with those ratings.

As for tank size, that really only correlates to how much air is used before the pump needs to refill the tank. To say it isn’t necessary or something you can eliminate as a concern for is a mistake, though. Having to stop and let the tank refill often can kill productivity. That isn’t to say you need an industrial-size compressor for the home shop. However, we’d at least recommend a 20-gallon tank.

It’s not a bad idea to buy a bigger or more powerful air compressor than you think you’ll need, either. After all, you’re likely to continue to buy more tools for your compressor as time rolls on. It’s not unlikely for your collection to outgrow your compressor. So, by going bigger now, you may be saving yourself from having to buy a more capable compressor down the line.

Here Are a Few Tools You Can Run With a Compressor

Here are a few types of air tools you can run using a compressor.

Every single car on the planet has stubborn nuts and bolts. An impact wrench and/or ratchet will make short work of those.

We know you’re as strong as Thor, but imagine having that type of handheld power without exerting any energy? Think of the air hammer as Mjolnir.

An angle grinder can be used to cut, sand, or machine various surfaces, primarily metal.

A blow gun is perfect for removing dust, dirt, leaves, sawdust, or any other contaminants from an area like an engine bay.

You can read more about them here.

Q: What is the duty cycle on an air compressor?

Q: Does an air compressor use a lot of electricity?

A: Yes, air compressors use a lot of electricity. While they don’t use as much power as electric tools do, the added cost to the investment in the compressor and tools can become quite significant over time. However, true that may be, as someone using the compressor in a home garage, you aren’t likely to see massive spikes in energy bills.

Q: Can I leave air in my air compressor overnight?

A: You can. The tank is designed to hold the air, and you won’t run into any issues with stressing the system. You might, however, find that water build-up in the tank becomes more significant than if you were to bleed the tank every time it goes without being used.

Q: How long should an air compressor last?

A: An air compressor should last anywhere from 10-15 years. But you might get more out of a high-quality unit that sees little use and is properly maintained. It wouldn’t be a surprise to see the compressor in a home shop last a lot longer than it would in an industrial space.

Still with us? The verbal punishment is over! For those of you still looking for some input on how to choose an air compressor, we highly recommend checking this clip out.

Let’s Talk: Comment Below To Talk With The Guides & Gear Editors!

We’re here to be expert guides in everything How To related. Use us, compliment us, yell at us. Comment below, and let’s talk! You can also shout at us on Twitter or Instagram, here are our profiles. Got a question? Got a pro tip? Send us a note: [email protected]