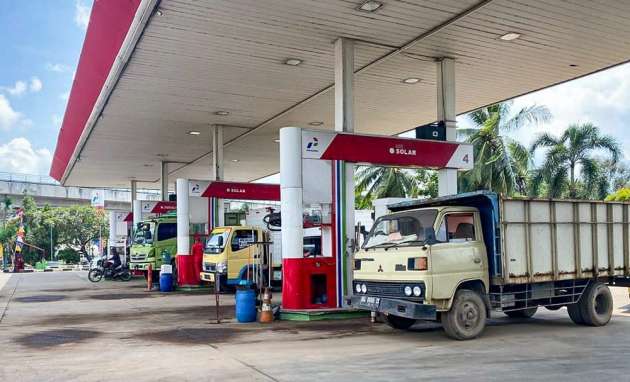 Malaysia isn’t the only country in the region grappling with the dilemma of fuel subsidies. Having already tripled its original 2022 energy subsidy allocation to 502 trillion rupiah (RM151.4 billion) due to rising oil prices and a depreciating rupiah, Indonesia is reportedly looking into raising its subsidised fuel prices in a bid to ease the fiscal pressure, Reuters reports.

The plans to do so were gleaned from a closed-door parliamentary meeting with national oil and gas company Pertamina last week, according to Eddy Soeparno, a member of the National Mandate Party and deputy head of the parliament’s energy committee.

He said other options being considered for the price increase include setting RON 90 petrol, which is the most widely used fuel in the country, at 9,500 rupiah (RM2.87) per litre, with the other fuels also set below Pertamina’s preferred price points. He added that Pertamina also backed introducing some sales restrictions such as banning vehicles with larger engine capacities from purchasing subsidised fuels. “We see this (raising prices and restricting sales) as having the least detrimental effects for the people,” he said.

With the government having said that even more money would be needed for subsidies this year if fuel prices were not increased, some form of revision is expected. The report added that the country’s chief economic minister, Airlangga Hartarto, said he would present all policy options to president Joko Widodo.

Sugeng Suparwoto, the chair of the parliament’s energy committee, confirmed details from the Pertamina meeting to the news agency. “We seek to maintain inflation at 7% until the end of the year,” he said, adding that cash handouts would be provided to cushion the impact of any fuel price increases on the purchasing power of Indonesia’s poor.

Meanwhile, Irto Ginting, corporate secretary of Pertamina’s retail distribution unit, declined to comment about the proposed price hikes, but said that pricing decisions are for the government to make.