It’s been a stellar year so far for electric car sales. Throughout Europe, new records keep coming, with emerging markets consolidating into double-digit share for plug-in vehicles. In the wake of September records, Italy – Europe’s fourth largest market – has now entered a new phase in the race to EV adoption. Time for a recap of the first three quarters of 2021.

Editor’s Note: This article was originally published on opportunity:energy.

Following all-time record monthly BEV registrations at quarter-end (8,492 units and 8% market share), official statistics from Unrae show an unforgiving picture of the dynamics at play. With almost 1,180,000 registrations to the end of September, the car market rebounds in the first three quarters by nearly 21% year-on-year (YoY) from less than 975,000 units in the same period last year. This however represents a slowdown from the over 50% YoY rebound that characterised the first six months of the year, which compared more favourably to the pandemic peak of last year.

Plugless hybrids grow to 28.2% market share over three quarters, closing in on petrol powertrains, still in the lead with 30.5% (but they were at 40% just a year ago!). Diesels see a more brutal cut, now down to 23.5% (from 35% last year). Non-electrified options are clearly doomed to an accelerating downward spiral, which is now starting to be felt by car manufacturers and dealerships alike.

Full electric cars reach 47,242 registrations to the end of September, almost 50% more than the entire result of 2020 and a steep 169% increase YoY (they were 17,561 units in the first three quarters of last year). The cumulative market share is 4% – it was just 1.8% a year ago. If the last quarter of 2021 will consolidate recent trends, a full-year result of 70,000 BEV units should be easily within reach. 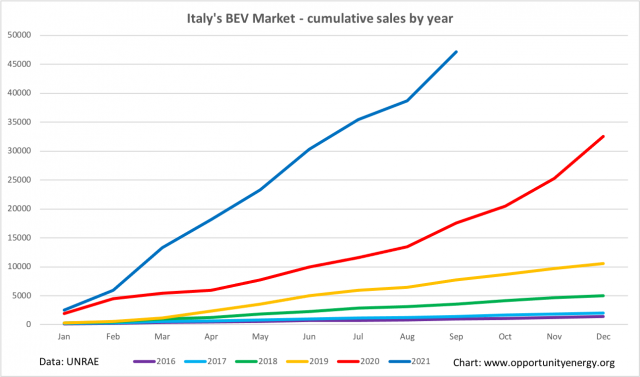 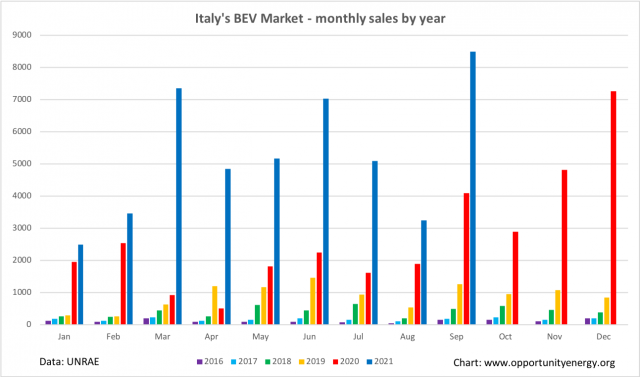 Plug-in hybrids have been the surprise of 2021 so far in the Italian car market. With 52,969 units, not only are PHEVs still ahead of BEVs for total count in the first nine months of the year, but they also boast an incredible four-fold increase over last year’s numbers, when 12,433 units were recorded in the same timeframe. This means a market share of 4.5% (from just 1.3% by the end of Q3 2020).

The combined market share of all plug-in vehicles now stands at 8.5%, thanks to the more than 100,000 cumulative registrations at the end of September. Last year at this point it was just 3.1% with 30,000 units. While double-digit plug-ins market share was already reached in July and September and will become baseline going forward, it is unlikely to be achieved as full-year result for 2021, with 9% an easy target in this incredible year of change.

As electric sales keep growing, so does the variety of models aiming to seize the market. The cumulative Top 10 BEV chart for Q1-Q3 2021 shows it well. 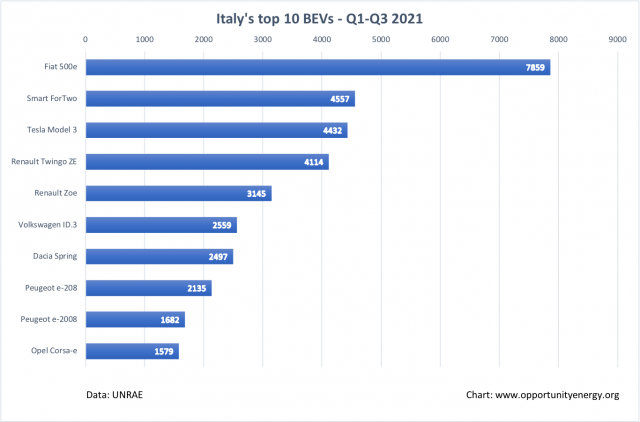 No surprises at the very top, as Fiat 500e leads comfortably with 7,859 units, suggesting it will be the first BEV to break the 10,000 annual units barrier by year end. An always consistent Smart ForTwo follows in second place with 4,557 registrations; will it be its last foray in podium positions before new mini competitors sweep in? For now, the main threat comes by no less than Tesla Model 3, which climbs to third position with 4,432 units following the most recent quarter end push. Chances are high that the premium D-segment model might reach second place by the end of the year, as Tesla’s production remains less affected by the ongoing global materials shortage.

For now, the first victim of Tesla’s clockwork execution on production and deliveries is the much cheaper Renault Twingo ZE, which falls out of the podium it held until now and into fourth position at 4,114 units. Renault Zoe is a distant fifth with 3,145 registrations, its position being threatened by VW ID.3, which takes sixth place 2,559 units – up from seventh position it held mid-year. Will the German model manage to climb further by year end? This will depend on the push VW group will give to sales in the last three months of 2021. 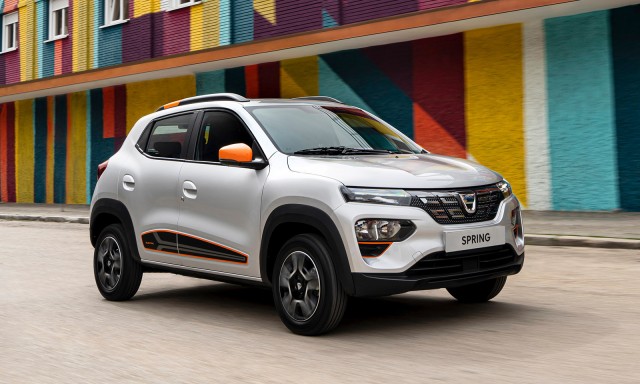 The brand new Dacia Spring, with just two months of deliveries (June and September) in its record, manages to reach seventh position with 2,497 units. Quite the exploit, which we can expect to be improved upon in the last three months of the year if deliveries will start matching demand on a regular basis. A trio of siblings closes the chart, Peugeot e-208 / e-2008 and Opel Corsa-e, a staple presence in the Top 10.

Higher segment BEVs are leaving their mark in 2021, while new electric minis aim at widespread adoption. The Italian EV market is coming of age, and so long as carmakers can match demand of their electric products, it will soon hit greater milestones and follow Europe’s most advanced markets in this exciting electric race.