Most avid enthusiasts can look back to a point in time when their fascination with things mechanical transformed into a lifelong pursuit. John Jinnings, from Churubusco, Indiana, at 15 remembers telling the owner of a local gas station that he wanted to learn about cars. He worked there through high school and college until he stepped away to take over the family business, but his love affair with automobiles never waned. In fact, as an avid connoisseur of mechanical novelty, he’s calculated that he has personally owned 156 vehicles, creating 25 magazine-worthy customs in the last 27 years. His latest is this over-the-top F-100, a 1,000hp twin-turbo bullet that he calls the “F1K.”

Everyone’s familiar with the F-100 logo but the mysterious F1K piques your curiosity about what might be under the hood. Lift it to see a polished sledgehammer of an engine with twin turbos large and in charge. From a visual standpoint, it’s hard not to be impressed with the sheer audacity of the build. Creating a unified package, however, is more than bragging about dyno numbers. Since John feels each build is supposed to somehow top those of the past, this project starts with a twist, since it originated not with the vehicle but the motor. The last three vehicles that he built featured a small-block supercharged motor, an injected John Kaase big-block, and a three-valve supercharged Mustang GT. Now it was time for something new and the Ford Coyote was the dessert of choice. After reading that Hellion Power Systems produced 969 hp at the rear wheels of a stock 5.0 Mustang using their twin-turbo setup, he contacted them about his goal of 1,000 hp. They assured him they could deliver that and more so the next priority was locating an engine compartment big enough to contain the monster mill. John felt a big old F-100 would surely accommodate the new motor, but as it turned out, it was still a tight squeeze. 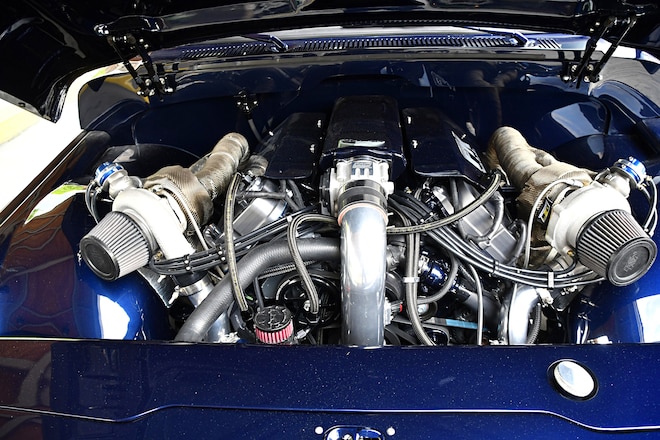 He found a rust-free California truck on eBay that had lots of items that were not part of the new plan. Most were sold off until John had a virtually free body. The goal for this one was to build a triple threat; something that could carve tight corners on a road course with the air conditioning on, lay down a respectable e.t. on the ’strip, and later, make its way to the winner’s circle without needing GPS.

Since the planned engine would have enough torque to give most chassis a barber-pole twist, the original frame was replaced by a Roadster Shop Fast Track chassis complete with a four-link in the rear, tubular A-arms up front, Corvette spindles, Penske shocks, and a 4-inch drop built in. Applying modern clamping forces are Baer six-piston disc brakes all around with 14-inch rotors up front and 13-inch versions in the rear. The chassis became a roller thanks to 19×9 Forgeline rims up front and tall ’n’ wide 20×12 versions in the rear. Michelin rubber gets the power to the ground.

Power was next and after the 2014 Ford 5.0L Coyote engine was machined by Holbrook Racing Engines in Livonia, Michigan, Brenspeed in Syracuse, Indiana, assembled all the parts. Hellion handled the force feeding, beginning with the pair of Precision 62mm turbos, an air-to-air intercooler, boost controller, and Sniper throttle body intake. Hellion teamed up with partner Turbonetics Performance for the wastegate and pop-off valves. Once all the intake trickery was tightened down, Hellion headers and a 3-inch powdercoated exhaust handled spent gases, dumping into a pair of MagnaFlow mufflers that exit in front of the rear wheels. Since the 5.0L uses electronic steering, John adapted a KRC power steering pump and water pump pulley that allowed him to run a hydraulic power steering pump. Keeping the recessed firewall clean, the master cylinder was hidden under the dash and the inner fender panels were fitted with false compartments in the rear to hide the boost controller on one side and the PCM on the other. Hoses and wires were routed underneath the hollow area below the Sniper intake and custom engine covers hide the coil packs. So far, the 25×19 custom radiator from Ace Radiator is big enough to keep the mega mill cool, maintaining a comfortable 180 degrees level. Multiplying the awesome power from the motor is a 4R70W four-speed automatic upgraded with a billet converter and 2800 stall. Getting the thousand-plus power to the ground is the job of the Speedway aluminum 9-inch running 3.70 gears with Positraction and Strange axles. High-technology bubbles over everywhere in the truck like the custom interface that connects the throttle-by-wire gas pedal, transmission controller, and Powertrain Control Solutions push-button shifter. 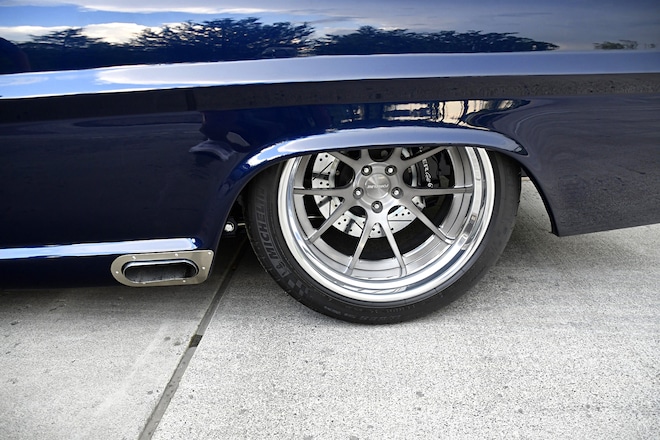 Body mods were next, beginning with the bed. The floor was raised 4 inches for clearance, all the corners were radiused, seams filled, and the tailgate smoothed. Larger custom wheeltubs were created to accommodate the wide rear rubber.  Up front, four slots underneath the front bumper duct air into the intercooler and the grille repeats the theme with four openings above and four more below the central grille bar. The grille, door handles, and the wheels share the same Silver Gray powdercoat.

The final step was the custom interior, accomplished by Steve Holcomb from Pro Auto Customs in Knoxville, Tennessee, using a combination of light gray and blue leather. Everything exudes upscale luxury. The smoothed dash uses a 1964 Falcon panel fitted with Dakota Digital instruments that monitor critical functions. The driver holds onto a Flaming River steering wheel that spins on an ididit column. The forward portion of the console holds controls for headlights, wipers, and A/C controls. In the center, the distinctive push-button shifter is clearly in view, sharing space with the Turbonetics boost controller and cup holders. Additional switches and fuses reside under the central armrest. The headliner, door panels, and under the dash are all backlit with blue LEDs. Music fills the cab, thanks to four speakers, front and rear, playing soundtracks from John’s iPhone via Bluetooth.

The build took almost two years to complete and is still waiting for a few last-minute tweaks like a final cutting and buffing on the paint, as well as sneaking up on the tune to establish that reliable 1,000 rwhp. The F1K is one of those trucks where you really want to get behind the wheel and pursue hooligan adventures, even though a date with Judge Judy might be the outcome. The truck was painted in Axalta BMW Tanzanite Blue, a shade that conveys the slight air of aggression necessary that fits perfectly with the hair-on-fire driving experience! This truck is angry with mind-bending levels of acceleration. While the uninitiated won’t be ready for the instant response, everyone needs a 1,000hp party piece in their lives!

We photographed the truck at the F-100 Reunion where it took a Class win, the Best Ford in a Ford Award, and the Truck of the Year Trophy. John’s lifetime of automotive experience paid off, reinforcing the notion that the longer you do something, the better you get at it. 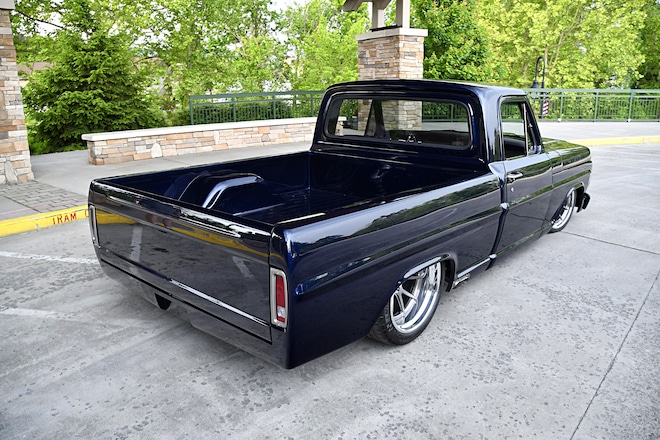