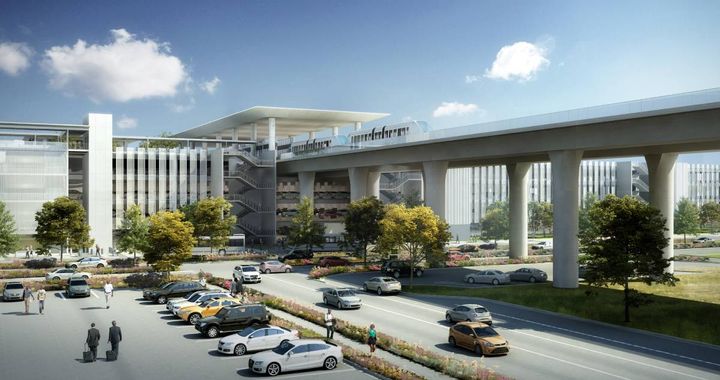 A total of 233,000 cubic yards of concrete was poured since breaking ground on the facility in 2019. Here, a rendering of what the ConRAC facility looking east will look like once complete in 2023.

LAX's new Consolidated Rent-A-Car (ConRAC) facility is closer to completion after the structure was topped off with the last of 233,000 cubic yards of concrete poured since breaking ground in 2019, a release said.

“The Consolidated Rent-A-Car facility will be a game-changer for our airport when it opens in 2023, providing a streamlined rental car experience for the hundreds of thousands of travelers who rent cars each year,” said Justin Erbacci, CEO, Los Angeles World Airports (LAWA). “We thank all of the craft workers and project team members who have tallied more than two and a half million work hours to reach this significant achievement as we build a better LAX.”

The topping off of the ConRAC facility took place at the Idle Storage building, one of three structures that comprise the approximately 6.4-million-square-foot facility. LAX is the second-busiest rental car market of any domestic airport (as of 2019), and this new facility will create an easier rental car experience for the hundreds of thousands of travelers renting cars each year.

The ConRAC facility will consolidate multiple rental car companies currently spread out across the LAX area into one convenient location, and will connect to the LAX Central Terminal Area via the Automated People Mover train system, which also is currently under construction. Once the train is open, it will replace rental car shuttles and remove approximately 3,200 daily shuttle trips from the busy terminal area and the surrounding roadways.

The facility is being developed through a Public-Private Partnership (P3) with LAX ConRAC Partners (LAXCP). It will house more than 18,000 rental car vehicles, including Ready Return and Idle Storage. It also will feature a Quick Turn Around building, allowing for the light maintenance of vehicles such as fueling, car washing, oil changes and tire rotation. The Quick Turn Around building also will help alleviate traffic congestion by keeping operations within the footprint of the facility and not out on the city streets.

The ConRAC facility is one of the major components of LAX’s $5.5 billion Landside Access Modernization Program (LAMP), which will improve access to LAX, provide new pick-up/drop-off options for travelers and provide the long-awaited connection to regional transportation.

The project also is the second of two Design-Build-Finance-Operate-Maintain, Public-Private Partnerships at LAX. The contract is valued at approximately $2 billion for a 28-year period, and is creating pipelines for local workers. The facility aims to achieve a required Leadership in Energy and Environmental Design (LEED) Silver rating with elements including native drought-tolerant landscaping, reclaimed water usage and a solar farm, generating more than 8,400 megawatt hours annually.