Lucid Motors held a “Production Preview” event this week, where we had the opportunity to tour the company’s AMP-1 manufacturing plant, chat with Lucid engineers, and take a Lucid Air Dream Edition out for a quick spin. While we have already taken a ride in a Lucid Air, very few people outside of the company have had the opportunity to actually get behind the wheel of one, making this a special event indeed.

Interestingly, the day we were at the factory, Lucid announced that the start of series production for the all-electric luxury sedan had begun, adding another layer of excitement at the facility while we were visiting. We were not told about that before arrival.

Lucid’s path to production wasn’t a direct one, as there was a time when we openly wondered if the startup would ever make it to production. However, led by former Tesla Model S chief engineer, Peter Rawlinson, Lucid secured the funding necessary, finished development, built out the factory, and will be delivering vehicles to customers before the end of this month.

We toured both Lucid’s powertrain manufacturing facility, as well as its Advanced Manufacturing Plant, called AMP-1. There were workers as well as robots working diligently in both facilities, but it was obvious that production had just begun, as everything was moving much slower than what we’re used to seeing in manufacturing plants.

But we’ve never actually been in a manufacturing facility on day one of production, and the slow, deliberate process was most certainly taking place to ensure quality. Lucid has previously talked about the fact that build quality is its top priority. We’d love to go back in a couple of months to compare the assembly line pace to what we saw at the start of production.

Lucid has only completed phase one of its production facility, which is positioned on a 590-acre site, in less than a year. Phase one will allow the company to produce up to 30,000 vehicles per year. However, Lucid plans to produce only 578 Air in 2021 and didn’t give an exact prediction for total 2022 production. 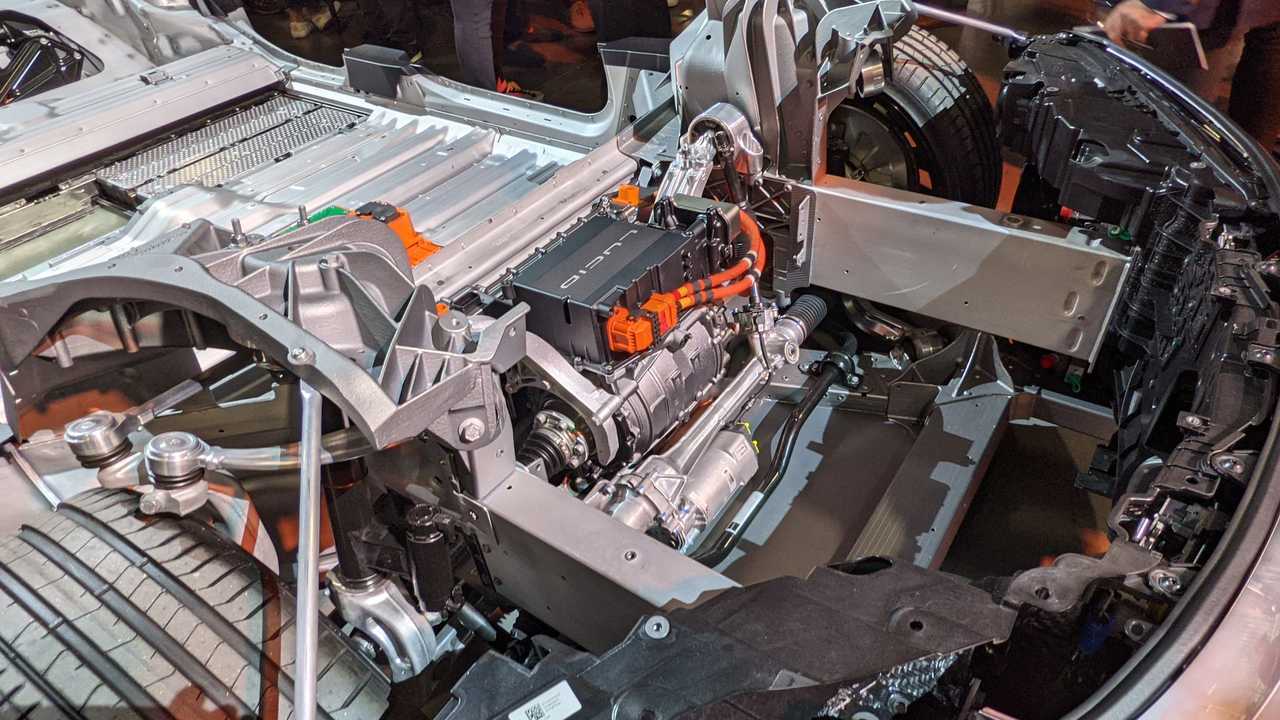 Lucid has its engineers available to answer questions and provide interviews and we were quick to schedule time with the Air’s Chief Engineer, Eric Bach. If I had a dollar for every time I’ve heard a Lucid representative say “efficiency”, I could…well, I couldn’t exactly buy a Lucid Air, but I may be able to take my wife out for dinner. The point is, they say it all the time and credit the company’s obsession with efficiency as the reason they were able to create such a powerful vehicle that can also deliver an EPA-rated 520 miles of driving range.

Powertrain efficiency is one of the things that Tesla does best. The legacy OEMs (with perhaps Hyundai as the exception) just can’t seem to match Tesla’s miles-per kWh efficiency. But Lucid has, and in fact, exceeded Tesla when comparing the Air against the Model S. The Air’s battery pack is 112 kWh, which is 12% larger than the Model S’s 100 kWh pack.

However, the longest-range Air delivers 28.5% more EPA-rated range than the longest-range Model S, 520 miles to 405 miles respectively. We should point out that the Model S costs more than half that of the Lucid Air Dream Edition Range, $79,990 to $169,000. But regardless of the price, Lucid accomplished something that nobody else has so far; they produced a desirable luxury EV that can compete performance-wise with the Model S, has more interior and cargo space, and is even more efficient.

We had a long interview with Bach and originally considered cutting it down a bit. However, we decided to run it in its full entirety in the video because Bach offers a masterful explanation of what he and his team had to work on to deliver world-class efficiency in the Air. You could tell Bach loves what he does, and would gladly talk about powertrain efficiency all night if given the opportunity.

He breaks down their work into four categories: aero, rolling resistance, auxiliary systems, and powertrain efficiency. We provided timestamps in the description of the video for those that prefer to skip some of the conversations – not that we recommend that, though.

We had a set route that included a driver swap at the turnaround point, and Kyle Conner was my partner. Kyle produced a fascinating first drive video of his own, which can be viewed on the Out Of Spec Reviews YouTube channel.

We only had about 15 minutes of drive time, so we’ll have to wait until we get an Air for an extended period to conduct a proper full driving review. However, the time we had was enough to learn a few things.

First off, even though Lucid claims the Air Dream Edition Performance can run a quarter-mile in about 10 seconds (9.9 seconds to be exact), it’s clear this is a premium luxury vehicle above all. You notice the feeling of openness and spaciousness as soon as you get in, especially in the back seating area.

Upfront the seats are both supportive and stiff, like how the seats in most premium German brands feel. There are adequate side bolsters, but they aren’t overly constrictive and allow the driver to move a bit.

We did a few acceleration runs in Sprint mode and the 1,111 hp powertrain didn’t disappoint, firmly planting all four passengers into their seats every time we punched the accelerator. From a standstill and at low speeds, the Air didn’t feel quite as potent as the 2021 Model S Long Range that I recently drove, but from 30-mph on when I floored it the vehicle offered that same visceral feeling I remember from driving the Model S – like this is just too fast. Additionally, I was alone in the Model S and there were four of us in the Air.

Cruising along at highway speeds, all you need to do is tap the accelerator and you reach triple-digits in two or three seconds. It’s hard to imagine any more than a handful of cars currently in production that can outrun a Dream Edition Performance from 50-mph to 100-mph.

The suspension was perfectly calibrated as far as I could tell for a short driving experience. While we were cruising along the highway it felt like we were gliding along effortlessly, almost as if we were floating on – well, air. Yet when you want to hit a turn at highway speeds the air suspension system with semi-active dampers combine to offer precise handling, and the steering is direct well-weighted.

We tried out the Air’s ADAS called DreamDrive and the adaptive cruise control and lane-centering worked very well. There’s a driver monitoring system that’s meant to alert the driver if they aren’t looking forward and paying attention, but our car wasn’t too keen on that. Both Kyle and I tried to get the system to warn us that we weren’t paying enough attention but it didn’t do so. Perhaps adjustments still need to be made to the monitoring system or it’s possible the vehicle we were driving didn’t have the final production software.

The small taste of driving the Air simply wasn’t enough and left us wanting more. Besides a more comprehensive driving report, we’re anxious to conduct the InsideEVs 70-mph highway range test as well as full DC fast charge recordings. We’re actively working with Lucid for more access and hope to have something to report on that front soon.

The Lucid Air is finally here, despite the setbacks the company faced, and that’s a good thing – not only for investors but for the entire EV industry. Startups like Tesla, and now Lucid and Rivian are helping to advance electrification at a pace that the legacy OEMs either can’t, or are unwilling to match. The Lucid Air moves the needle. It’s not only a legitimate Tesla competitor, but it will also take sales from Mercedes and BMW, as well as the other premium sedan manufacturers, both electric and ICE.