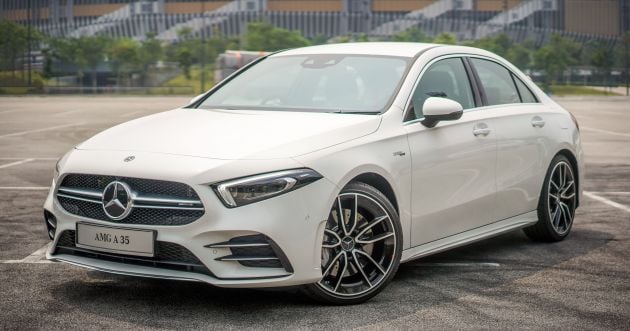 The Mercedes-AMG A 35 4Matic Sedan could be the next model to be locally assembled (CKD) in Malaysia, at least according to a local Mercedes-Benz dealer. In a Facebook post, the dealer claims that the performance version of the A-Class Sedan – already a CKD model – will be launched soon and that bookings are now open.

The A 35 Sedan first arrived back in September 2019 as a fully-imported (CBU) model and retailed at RM348,888 on-the-road without insurance at the time. When the sales and service tax (SST) exemption kicked in, the asking price dropped to RM336,278, but as of the time of writing, the model is not listed on Mercedes-Benz Malaysia’s (MBM) official website.

The FB post did not mention how much the A 35 Sedan CKD will go for, so let’s do some extrapolation to try and guess a figure. Wind back the clock to when all variants of the A-Class Sedan were CBU, and you’ll recall that the range-topping option was RM81,000 more than A 250 AMG Line.

On that mention, we don’t expect too much of a difference from the CBU version in terms of what’s under the bonnet, with a M260 2.0 litre turbocharged four-cylinder petrol engine providing 306 PS (302 hp) and 400 Nm of torque. A seven-speed AMG Speedshift 7G dual-clutch transmission and AMG Performance 4Matic all-wheel drive system are responsible for routing power to all four wheel – 0-100 km/h takes 4.8 seconds.

Despite the FB post, we’ll still have to wait for MBM to officially confirm if there will be an A 35 Sedan CKD. Are you looking forward to such a model and its potentially cheaper price tag?