The hot new BMW M3 Touring estate is on the way and it’ll feature the same 503bhp straight-six engine as the saloon. 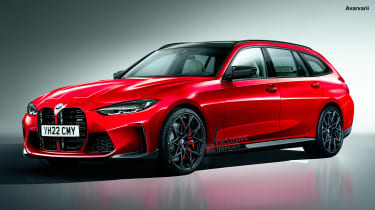 BMW has officially confirmed plans to launch an estate version of the upcoming, sixth-generation M3. When it eventually reaches the UK market, it’ll be the first official M-performance version of the 3 Series Touring, and compete directly with the Mercedes-AMG C 63 Estate and the Audi RS 4 Avant.

The car has been officially pictured in a shadowy teaser image and now in a short video clip posted by the manufacturer on Instagram showing a disguised prototype on test. The images confirm that the design of the car will closely follow that of the new BMW M3 saloon that has also been spied testing, as revealed in our exclusive rendering.

A post shared by BMW M GmbH (@bmwm) on

It has also been confirmed new BMW M3 Touring will be powered by a twin-turbocharged six-cylinder petrol engine. It’s the same 3.0-litre powertrain found in the X3 M and X4 M performance SUVs, which means the hot M3 estate should have an output of 503bhp and 600Nm of torque.

The new M3 Touring will feature the same selectable four-wheel drive system as the M3 saloon, which will allow the driver to send 100 per cent of the engine’s power to the rear wheels. BMW has also confirmed that the estate will have a wider track than the standard car, which should be complemented by an upgraded suspension system and larger brakes. 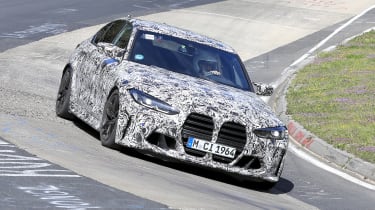 BMW says the M3 Touring is still in the early stages of its two-year development cycle, so we’re unlikely to see the finished car until late 2022 at the earliest. The first test mules are now testing on public roads, along with a few track-based prototypes, which will undergo a rigorous test cycle at the Nurburgring.

Our exclusive illustration gives an indication of how the finished M3 Touring will look, and BMW has confirmed that it will share some of its cosmetic tweaks with the standard M3.

The pictures of the disguised M3 Touring confirm an aggressive makeover compared with the regular 3 Series Touring, but also that the M3 models are set to adopt the large vertical kidney grilles used to controversial effect on the new 4 Series and the next M4 too.

BMW developed a running prototype M3 Touring based on the E46 generation M3 in 2000, using a straight-six engine developing 338bhp, but never brought the model to market.