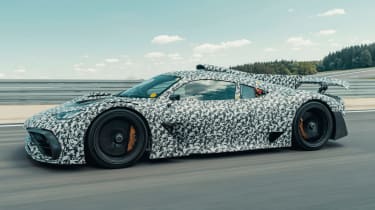 The Mercedes-AMG One hypercar nears closer to production, as the F1-derived hypercar’s testing moves from test bed to test track.

The £2.4million, plug-in hybrid One will develop 986bhp, and act as a technological flagship for Mercedes’ road car line-up. The German hypercar will also be a rival to Aston Martin’s forthcoming Valkyrie.

Mercedes-AMG says that the main focus of the current program is to ensure that the various active aerodynamics parts are all integrated in their operation, and that the complex Formula 1 title-winning petrol-electric power unit – with extra electrical assistance – offers the driveability buyers demand from a production car. To this end, the power units are being tested on track at their full, near-1,000bhp output.

Unlike the F1 power units, whose hybrid systems only provide boost to the combustion element, the AMG-One’s hybrid system can run on battery power alone – another function that engineers are keen to refine before production. 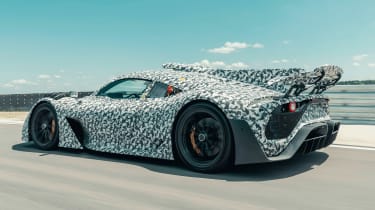 Video footage also gives us a glimpse of the production-ready interior. This includes a digital rear view mirror – necessary due to the fact that the rear view is obscured by a louvred engine cover complete with an F1-style shark fin. Details have been further refined from the early prototypes; the latest test models sport a triple exhaust system, mimicking that of the F1 car.

Mercedes-AMG One: engine and performance

When it arrives, the Mercedes-AMG One will be one of closest things we’ll ever see to a Formula 1 car for the road. It uses a version of the 1.6-litre turbocharged V6 hybrid engine that has powered Mercedes to six consecutive drivers and constructors F1 titles since 2014, and is assembled in the same Mercedes High Performance Powertrains plant in Brixworth.

The V6’s 11,000rpm rev limit is lower than the race cars’ (which are capped at 15,000rpm, but rarely pass 13,000rpm in reality), but the One’s plug-in hybrid system – which features four electric motors in total – compensates by delivering more electrical output.

One of the electric motors forms part of an electronic turbocharger in a bid to reduce turbo lag, while another is linked to the crankcase to augment the 1.6-litre engine’s output with an additional 161bhp, feeding off excess energy from the turbo system. Two more 161bhp motors drive the front wheels to give the AMG One four-wheel drive.

Mercedes says that the AMG One’s 986bhp translates into a top speed in excess of 217mph, while 0-124mph takes less than six seconds. No 0-62mph figure has been given at this stage, although it’s likely to be less than three seconds. 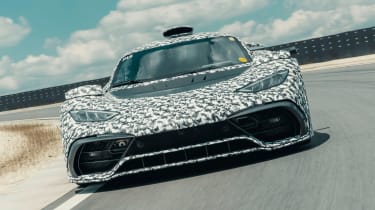 The electric motors are fed by an array of lithium-ion cells, mounted on the chassis behind the front axle, identical in type and arrangement to those used in the Mercedes F1 car. However, the AMG One’s battery has far more cells; enough to unlock an all-electric driving range of around 15.5 miles.

With the front axle motors, the Mercedes-AMG One can recuperate up to 80 per cent of the braking energy produced under normal driving conditions to be stored for later use, while independent acceleration and braking on each wheel means they can act as a torque vectoring system. The rear wheels receive drive from a brand new eight-speed gearbox, which can be operated via shift paddles on the steering wheel.

As well as offering an all-electric driving mode, the AMG One will feature a “highly dynamic” mode, which Mercedes says uses comparable settings to those used by its Formula 1 racer during qualifying laps. The driving mode automatically switches between combustion and electric drive for the best performance. In addition, the AMG One’s combustion engine will be able to cover the equivalent of over a quarter of an F1 season before it needs servicing.

Like a previously sighted test vehicle, the mule seen in the video above isn’t a production model; items like the exposed bonnet intake and rudimentary quad-exit exhaust setup are expected to change between now and the car’s launch. However, most of the hypercar’s bodywork – including the scissor doors and enormous rear fin – should be transferred onto the production model untouched.

The interior is equally rudimentary and will be trimmed with more user-friendly seats, cladding and controls, in place of this prototype’s racing-derived steering wheel and bucket seats. 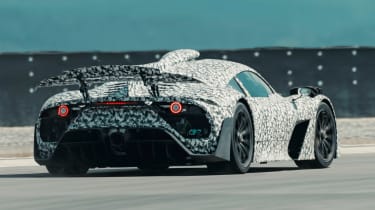 Mercedes describes the cabin as “Formula 1 for two.” Inside, there’ll be a pair of heavily bolstered bucket seats with adjustable backrests and an F1-inspired square steering wheel. The skinny, uncluttered carbon-fibre dashboard will house two 10-inch displays: one behind the steering wheel and the other mounted in the centre console. A third screen is linked to a camera on the car’s rear bumper and acts as a rear-view mirror.

The AMG One’s front end is dominated by a collection of huge vents on the front apron and beneath the windscreen, while a pair of flat LED headlights are sunk into the bonnet. Naked carbon aerodynamic flaps are pinned to the car’s sculpted sides, while an air intake perched on the roof feeds the combustion engine.

Around the back, an F1-style shark fin sits above the engine compartment and divides the rear end, while a huge rear diffuser and retractable rear spoiler are also present to provide plenty of downforce. Active aero is found at the front too, with an extending front splitter and movable flaps positioned over the front wheels. The body itself is a carbon-fibre monocoque, but Mercedes has not revealed how much the AMG One concept weighs.

Is the Mercedes-AMG One a bargain Formula 1 car for the road at £2.4 million? Tell us what you think below…