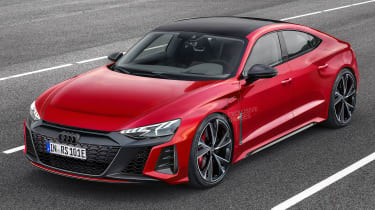 It has been confirmed that a hot Audi RS e-tron GT will crown the German brand’s electric performance car line-up. The RS e-tron GT will be the first fully electric vehicle to be developed by Audi Sport, and it will go on sale alongside the regular saloon in the middle of next year.

Audi had intended to launch the standard e-tron GT at this year’s Los Angeles Motor Show, but plans were scrapped due to the ongoing pandemic. The grand unveiling is now scheduled for early in 2021, but already Audi has confirmed that a hot version will be launched at the same time. It marks quite a shift in strategy at Audi Sport, whose models tend to be launched around two years after the arrival of the regular version.

Previewed in our exclusive images, the RS e-tron GT will be clearly marked out by a unique aero-optimised bodykit, flared wheelarches and an aggressive rear diffuser designed to create more downforce at higher speeds. The roof and some trim will be made from carbon fibre, to help save weight. 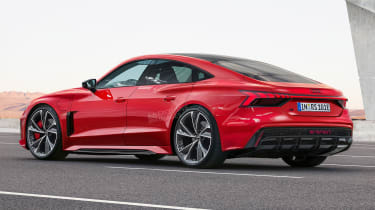 Under the skin, the e-tron GT, as well as the hot RS version, will be based on the same platform as the Porsche Taycan. Audi has yet to issue any official details or performance data on the powertrain, but the e-tron GT will use a triple-electric motor set-up, whereas the Taycan only uses two.

A large 95kWh battery is expected to be fitted to the RS model, while two electric motors will be attached to the rear axle and one on the front. Active and fully variable torque vectoring will control the power split at the rear wheels to maximise agility and handling. Audi even says the triple-motor set-up allows “the capacity to perform controlled drifts”. Unique chassis tuning, re-engineered suspension and a lowered ride height will all feature on the RS.

Using the Taycan as a benchmark, expect power from the RS e-tron GT to be in the region of 700bhp. That will ensure a 0-62mph time of around three seconds. The large battery should enable a range of around 250 miles on a single charge, while the platform has been developed to accommodate rapid charging at a rate of 270kW. The flagship model is expected to cost in excess of £120,000 when it arrives, while lesser versions of the e-tron GT should start from around £80,000.

All versions of the e-tron GT will be produced at Audi’s Böllinger Höfe facility in Neckarsulm where the R8 supercar is also built. The flexibility of the site also allows the company to produce additional body styles, should Audi choose to broaden the e-tron GT line-up.