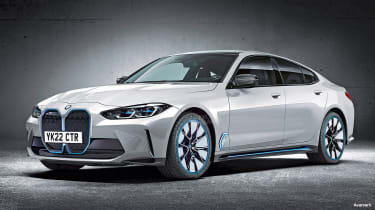 The arrival of the new iX3 sees BMW tap into a potentially lucrative, but ultimately safe sector of the electric car market, with battery-powered SUVs growing in popularity. However, the firm’s next steps to expand its EV line-up will be far more adventurous, because we know that six new electric BMWs are on the horizon. These will include all-new models and electric versions of firm favourites, part of BMW’s promise to have 12 new EVs on sale by 2025.

Forming a key element of the new-look i line-up from 2021 will be a four-door all-electric coupé intended as an i-division counterpart to the new 4 Series and M4: the BMW i4. Although this won’t take on the Tesla Model 3 directly (an electric 3 Series will do that), it will serve as a more style-conscious alternative to the popular American EV and, indeed, the forthcoming electric 3 Series.

The new BMW i4 will be based on the Concept i4 revealed earlier this year – described then as around 85 per cent representative of the final car – and our exclusive images give an indication as to what the road-ready i4 will look like. BMW will try to carry over some 4 Series DNA into the i4 in the form of large, but blanked-out double-kidney grilles dominating the front end, hinting at the all-electric powertrain. The four-door body means that it’ll have more mainstream appeal than the two-door 4 Series Coupé, while as on the iX3, lots of blue exterior detailing will be applied.

The new i4 will use what BMW calls its ‘fifth-generation’ electric drivetrain technology. This makes its debut in the new iX3, but the i4 is where it comes to the fore.

Compared with the tech on older electrified BMWs, models with this latest set-up benefit from a new electric motor and transmission system that’s more compact and lighter, for greater efficiency and sleeker packaging. BMW has also focussed on reducing the number of rare earth materials in the battery and electric motor system. None are used to construct the motor, while the battery uses two thirds less cobalt than before. 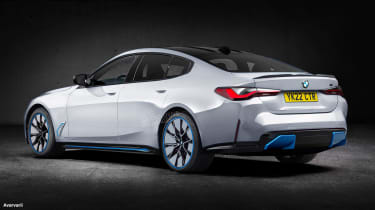 Energy density is where the company has made big strides, however. The iX3’s battery has around 20 per cent more capacity for its physical size compared with previous-gen BMW batteries. BMW says that the new system will support an EV capable of 435 miles on a charge, but for the i4 a range of 373 miles is targeted.

The developments seen on the i4 will be followed in 2021 by a new bespoke electric SUV – the iNEXT, or iX, which will stand at the top of BMW’s line-up. It’ll be about the size of an X5 but with a low, X6-aping roofline and interior space comparable with the X7.

The German company has already confirmed that it will add a small electric SUV to its line-up too, in the form of the iX1. It’ll likely arrive in 2022 as part of the next-generation X1 line-up.

Similarly, the ever-popular 5 Series saloon will also gain an all-electric variant towards the middle of the decade after the eighth-generation model arrives around 2023. It’ll probably be called i5 and use a developed version of the CLAR platform underpinning the current G30-generation 5 Series model. A rival from Mercedes in the form of the EQE – an electric E-Class-sized saloon – will already be on the market when the 5 Series EV arrives.

Similarly, and alongside the electric 3 Series mules caught testing by our spy photographers, BMW will crown its electric saloon line-up with a battery-powered version of the next 7 Series. No mules have been seen just yet, but it’s likely to feature the previously mentioned 435-mile range thanks to a huge underfloor battery and a more aerodynamic shape than the current model, as it goes head to head with the upcoming Mercedes EQS and the next-generation Jaguar XJ.

What do you think of our exclusive BMW i4 images? Let us know in the comments section below…