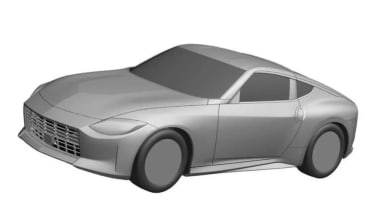 The design of the new Nissan 400Z has been all but confirmed by the company’s patent drawings. The latest model in the Japanese brand’s famed Z-car sports car lineage was recently previewed by the Z Proto concept – and it looks like the production car’s styling will follow the prototype’s precisely.

Like the Z Proto concept, the Nissan 400Z will be a melting-pot of classic Z styling cues, with Nissan’s designers cherry-picking features from the badge’s 50-year history. Most notably, the production model will retain the same “haunch” around the C-pillar – a key cue from the brand’s more recent Z-badged coupes, the 350Z and 370Z.

At the front, the semi-circular headlamp units and broad radiator grille are unashamed carry-overs from the original 1969 Fairlady Z – although they have been mixed with a more modern splitter. However, the bonnet shares the same V-shaped power bulge as the original.

Further back, the tail lights are another obvious nod to the 370Z, housed in a rectangular background that runs across the back of the car and wraps around onto the rear wings. The door handles also look very similar to the 370Z’s – and, in another reference to its predecessors, the concept had both Z and Fairlady badging.

Given how closely these patent drawings match up to the Z Proto, we expect the finished car will share the same dimensions as the concept. The prototype measures 4,382mm long, 1,850mm wide and 1,310mm tall – making it around 12cm longer and slightly wider than the current 370Z. Its roofline is also half a centimetre lower. 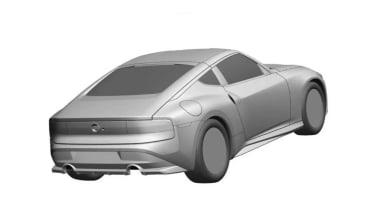 We’re yet to receive confirmation on the 400Z’s interior design. But the cabin of the Z Proto concept looked ready for production and, like the exterior, we expect it’ll be carried onto the finished car untouched. The concept featured a 12.3-inch digital instrument panel which has the redline shift point at the 12 o’clock position, and a deep-dish steering wheel.

Nissan has not revealed much about the new car’s underpinnings but it says it will have an “enhanced” twin-turbocharged V6 petrol engine and, significantly, a six-speed manual gearbox. Nissan boss Makoto Uchida said: “With the Z, we’re bringing drivers the excitement of a pure sports car. For more than 50 years we’ve been creating the legend of Z together. The new Z is on its way.”

Unfortunately, though, the 400Z won’t be on its way to the UK. Nissan was expected to sell the sports car globally, using it as the flagship alternative for its expanding range of SUVs and pure-electric vehicles. But, at the Z Proto’s digital reveal, the company confirmed that it had ruled out the European market.

In a statement, Nissan said: “A shrinking European sports car market and specific regulations on emissions mean that Nissan was unable to build a viable business case for the introduction of the production version of the next-generation Z-car in Europe. In Europe, Nissan’s priorities remain its commitment to renew its crossover line-up and accelerate its range electrification strategy.”

That means the 400Z will probably be focused on the United States, where selling a twin-turbo petrol motor should encounter fewer legislative issues. It is conceivable, though, that right-hand-drive versions from Nissan’s domestic market in Japan could be sold to UK customers by an importer.

Renault and Nissan suffered heavy losses in 2020. Check out the full story here…