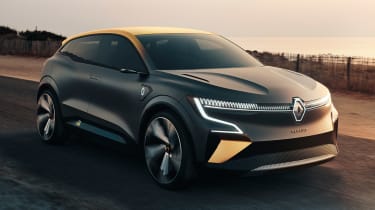 Renault has signposted that the future of the Megane is all-electric and destined for a new compact SUV footprint with this: the Megane eVision. The new concept car foreshadows a production model due in 2021.

The Megane eVision is an evolution of the Morphoz concept revealed back in March. But importantly, the new concept builds on the foundations of that concept car to give us a more accurate glimpse of the production model that will come next year.

The Megane has been the star of Renault’s family car line up for 25 years, but the hatchback’s quarter-century reign has come into question recently, with small SUVs increasingly becoming the breadwinners for companies like Renault.

Earlier in 2020, Renault design boss Lauren van Acker told Auto Express that development costs for the family hatch could be put to better use elsewhere in the company’s portfolio, hinting that Renault would need to restructure its family car offering around electric vehicles to flourish once again.

According to new Renault Boss Luca de Meo, the Megane eVision is a ‘reinvention’ of the company’s classic hatchback: “We took our 25-year best-seller and took it to the future. Megane eVision reinvents Megane, and Renault reinvents Renault. This is just the beginning; a whole new generation of innovation-packed electric vehicles is to come,” he explains. 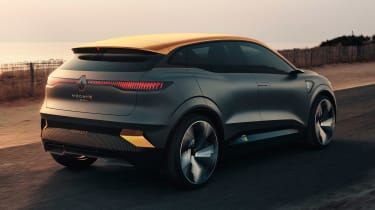 Some tentative specifications have been revealed, but some of the hard numbers are still lacking. The 60kWh battery is mated to an electric motor, developing 214bhp and 300Nm of torque, that drives the front axle and enables 0-62mph in less than eight seconds. Renault has not revealed the maximum range on a full charge, but says that the Megane eVision previews a car that will be able to drive from London to Newcastle in the same amount of time as a combustion engined car. That would suggest a range approaching 275 miles.

The CMF-EV platform is a flexible one, and Renault has already confirmed that dual-motor electric cars with more powerful all-wheel-drive electric drivetrains are on the company’s radar. Models using this platform with larger batteries are also in the pipeline.

DC rapid charging is enabled at up to 130kW. No charge time has been revealed, but that would roughly put the Megane eVision’s recharge time around the 0-80 per cent in 40 minutes ballpark. AC destination charging can be handled at up to 22kW.

Against the tape measure the Megane eVision sizes up at 4,210mm long, 1,800mm wide, 1,505mm tall and with a 270mm wheelbase. That means it has a smaller footprint than a Megane hatchback while riding taller, and the dimensions are comparable with that of the supermini-sized Captur SUV. 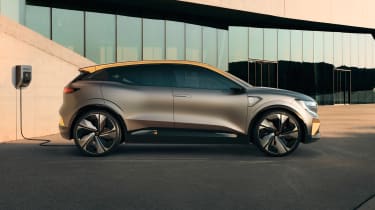 It also means that Renault’s debut entry on the advanced CMF-EV platform is a segment down from the Nissan Ariya SUV. The Nissan shares the same platform as the Renault but is bigger and comes with two battery options that are larger than the Megane eVision’s 60kWh cell.

As for the way the Megane eVision looks, there are clear nods to the current generation Megane in the design, paired with classic concept car-style surfacing and the aforementioned transformation into compact SUV form.

It appears taller than the Megane, while the smooth surfacing, flush door handles, and camera based mirrors improve aerodynamic efficiency. The hatch lid is rakish and reminiscent of coupe SUVs, topped with a small spoiler, while it rides on aerodynamic-looking 20-inch wheels.

The brand’s current headlight signature is on show at the front of the Megane eVision – a nod to the fact that it will be a member of the line-up as soon as next year, and as such, won’t need to introduce a completely new design language. Similarly, the rear taillight bar spanning the width of the tailgate is also a nod to the current iteration of the brand’s hatchback.

No interior images have been revealed, but Renault has teased that the Megane eVision’s cabin is ‘state-of-the-art’ and features a large L-shaped infotainment system called Livingscreen. The instrument panel is ‘slim and sleek’ and new storage solutions have been introduced around the interior.

The company has also hinted that despite the fact the Megane eVision is smaller than the contemporary Megane hatchback, space in the front and rear rivals that of a family saloon. The firm says this can be put down to the packaging advantages of the new electric car platform.