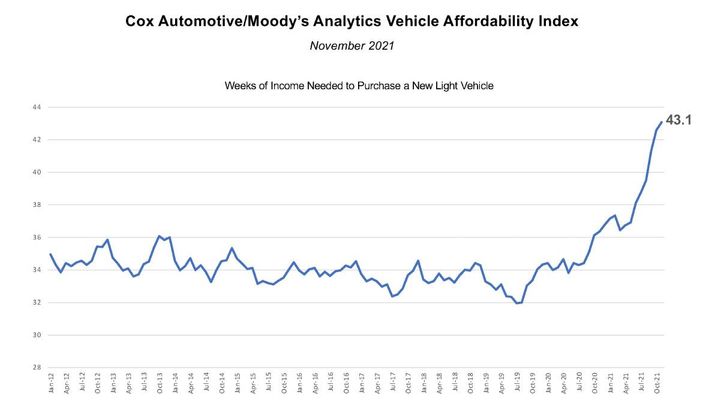 Weeks of Income Needed to Buy a New Light Vehicle

Following similar dynamics each month this fall including another new record on the average price paid and another low for incentives, new-vehicle affordability declined again in November, according to a Cox Automotive news release.

November’s affordability decline was caused by all vehicle market factors moving against affordability while median income again declined, albeit slightly. The number of median weeks of income needed to purchase the average new vehicle in November increased to 43.1 weeks from an upwardly revised 42.6 weeks in October.

Every factor moved against affordability in November. The price paid moved higher to a new record average price of $46,329. Incentives declined to at least a 20-year low. Average rates also moved higher to the highest level since June. Estimated median income in November declined 0.1%. With record-high prices, low incentives, and a higher interest rate, the estimated typical monthly payment increased to a new record high at $687, which was up 20.7% year over year.

With the decline in November, new-vehicle affordability was much worse than a year ago when prices were lower and incentives were much higher. Affordability in November was worse than at any month covered by the index data, which dates to January 2012.