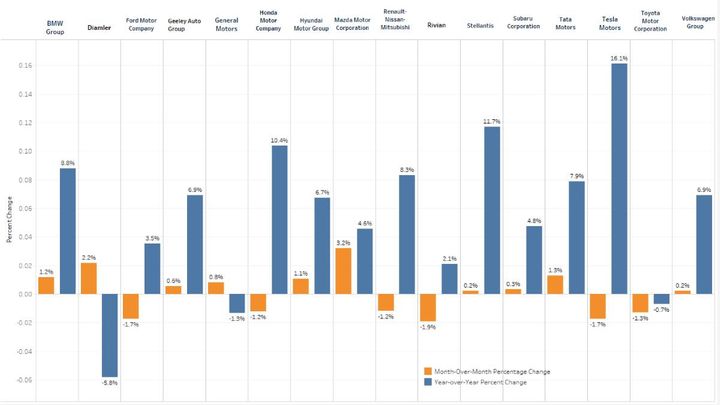 Slight price dips are emerging among some automakers, but overall new vehicle prices are still above sticker and above last year.

The average price paid for a new vehicle in the U.S. in September 2022 was down from August’s record but remains solidly above the $48,000 mark, according to new data released Oct. 12 by Kelley Blue Book.

“Interest rates and average monthly payments were up in September, which means affordability worsened,” said Rebecca Rydzewski, research manager of economic and industry insights for Cox Automotive, in a news release. “With prices still well above MSRP and incentives from automakers still low, sales in September continued to struggle as consumers weighed their vehicle-buying options.”

Strong luxury vehicle sales have been a primary reason for overall elevated new-vehicle prices. Luxury vehicle share remains historically high, increasing to 18% of total sales in September from 17.6% in August. The high share of luxury sales is helping to push the overall industry ATP higher.

In September 2022, the average luxury buyer paid $65,775 for a new vehicle, down $60 from August when luxury ATPs hit a record high of $65,835. Buyers continue to pay more than MSRP for new luxury vehicles, although prices are trending closer to or below sticker prices in some luxury segments.

Mercedes-Benz and Jaguar showed the most price strength in the luxury market, transacting between 2% to 4% over sticker price last month. Luxury brands Audi, Alfa Romeo, Infiniti, Lexus, Porsche and Tesla showed the least price strength, selling 1% or more below MSRP in September.

The average price paid for a new non-luxury vehicle in September was $44,215, down $256 month over month. On average, car shoppers in the non-luxury segment paid $829 above sticker price, a slight decrease from August.

The average price paid for a new electric vehicle (EV) declined in September by $1,162, or down 1.8%, compared to August, but was up by 9.7% compared to a year ago in September 2021. The average new EV price was $65,291, according to Kelley Blue Book estimates, well above the industry average and aligning more with luxury prices versus mainstream prices.