We first got hints of the Nissan Ariya EV SUV making a possible introduction in Malaysia back in February when we saw it make an appearance in Malaysian Nissan distributor Edaran Tan Chong Motor’s Chinese New Year greeting video.

Tan Chong was one of the first companies in Malaysia to embrace electric cars – it introduced both the Nissan Leaf under the Nissan brand as well as the Renault Zoe and Twizy under the Renault brand.

The latest generation Leaf’s price recently got updated to reflect its new import and excise duty exempted status – it’s now priced at RM168,800, down from its initial launch price of RM188,888.

But the Leaf has been around for some time now and perhaps has lost a little lustre. The market is full of new models now, and Nissan has upped its game with the new Nissan Ariya, the Japanese automaker’s first mass market fully electric passenger car since the original Leaf.

What segment does the Nissan Ariya compete in?

Externally, the Ariya is a little shorter and lower than the X-Trail, but it is a bit wider. It has a longer wheelbase compared to the X-Trail.

This is typical of electric cars, where the trend is for longer wheelbases in relation to exterior length and segment size because axles powered by electric motors are not constrained by combustion engine and gearbox placement. So I think it’s safe to call the Ariya a C-segment SUV like the X-Trail.

What are the electric motor and battery choices? 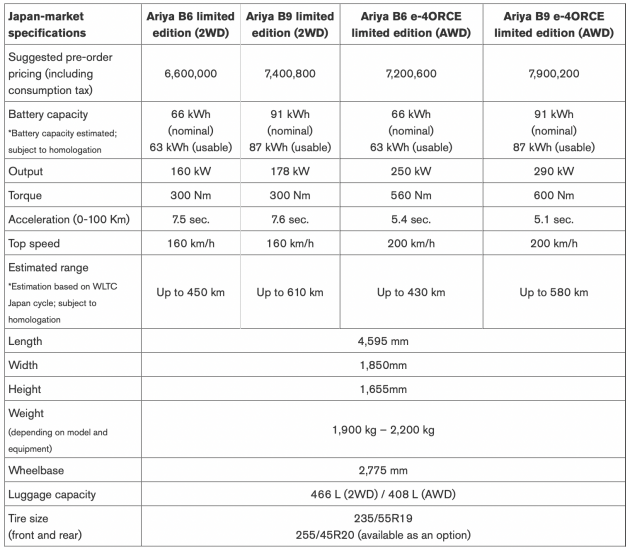 The Nissan Ariya line-up is built from a few combinations of motors and battery packs. You either have 2WD where a single motor drives the front wheel, or AWD versions where you have two motors, one driving the front axle and one driving the rear axle.

The 2WD versions are focused on economy and maximising range. The 91 kWh 2WD version has the longest rated range – up to 610 km. Its electric motor is a bit more powerful, rated at 178 kW compared to 160 kW on the 2WD 66 kWh variant, but you will notice it is actually 0.1 seconds slower in the 0-100 km/h sprint because the additional power is merely to offset the extra weight of the larger battery pack.

The AWD models have a more performance and handling bias – Nissan has produced some pretty cool marketing videos to sell the benefits of the e-4ORCE electric AWD system.

The fastest Ariya you can buy is the 91 kWh 290 kW version, which can hit 100 km/h in 5.1 seconds, while being rated for 580 km range. Having two motors instead of one makes it less efficient than the 2WD version. The 66 kWh AWD model kind of sits in the middle, it’s not the fastest and cannot go the furthest, but it’s cheaper to buy than the models with the fastest acceleration or the longest range.

How much could the Nissan Ariya be priced in Malaysia?

Given that CBU electric cars currently enjoy import and excise duty exemptions until the end of 2023, it could be possible to directly convert the Japanese pricing for the Nissan Ariya to try to predict Malaysian pricing.

The following use currency conversions at the time of publishing:

A starting price of RM226k up to RM271k would put the Ariya smack in the middle of the hotly contested RM200k-RM300k EV range which are full of other electric SUVs.

The following EVs would be competing with the Ariya:

With a 100 km/h sprint time of 5.1 seconds, the most performance-oriented Nissan Ariya would be second fastest accelerating EV of the lot, beating the Ioniq 5 Max AWD by 0.1 seconds and only losing to the Volvo XC40 BEV’s 4.9 seconds time. The slowest of the lot would be the EQA, only being capable of a 8.9 second sprint, significantly slower than even the slowest Ariya 2WD 91 kWh model.

You can read more about the Nissan Ariya in our previous story, which we published back in July 2020. Yes, it’s been nearly two years since it was first unveiled and it’s only going to roll into showrooms this year. Guess that’s what a pandemic and chip shortage does to automotive product timelines.

What do you think, would you consider a Nissan Ariya over its competitors given a similiar budget? Let us know your thoughts in the comments.