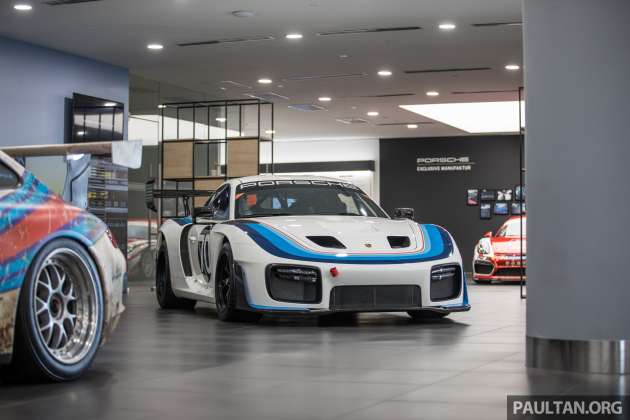 What a delight it is to see the Porsche 935, a track-only beast with a production run of just 77 units worldwide, right here in Malaysia. It’s based on the 991-generation 911 GT2 RS, sharing the same highly strung 3.8 litre twin-turbo flat-six engine.

Don’t let its Le Mans-winning 935/78 ‘Moby Dick-inspired’ livery fool you – the car packs all of 700 PS routed exclusively to the rear wheels. A rigidly-mounted seven-speed dual-clutch PDK transmission is the only available option, while a race-ready limited-slip differential is standard. Also on is an electromechanical steering with variable ratio, just like the road-going GT2 RS.

The 935 uses a three-way adjustable racing absorber at each corner, while braking is managed by 380 mm steel rotors (with six-piston aluminium monobloc Brembo calipers) up front and 355 mm steelies (four-pot calipers) at the back.

The 18-inch wheels are lightweight forged alloy units (11.5J in front, 13J at the rear), replete with 29/65-R18 and 31/71-R18 profile rubbers respectively. Other details include LED headlights taken from the 919 Hybrid LMP1 race car, side mirrors from the 911 RSR, and the titanium exhaust tailpipes inspired by the 1968 Porsche 908.

The bulk of its exterior panels are made from lightweight carbon-fibre reinforced plastic, some of which are deliberately left unpainted, like the wing mirrors, massive GT spoiler and rear bumper. Inside, it has a gearshift lever with a laminated wood design, carbon-fibre steering wheel, a safety roll cage, race bucket seat with a six-point safety harness (passenger seat optional), and air-conditioning.

When it was launched back in 2018, the price for a Porsche 935 started from 701,948 euros (roughly RM3.4 million). It was unveiled at the Rennsport Reunion VI at the Laguna Seca Raceway in California, United States. Again, only 77 units were made globally.