“The guy’s name was Bobby Crawford. He was a retired rancher north of Denton, Texas. My brother, Bruce, asked me to go take a look at a 1977 Grand Prix El Camino he had,” Barry Johnson said.

Bruce and Barry thought the Pontiac could be a one-off of some kind. While looking over the oddball Grand Prix with a pickup bed, Crawford offered to show him “another car” in his third-gen Camaro and Firebird collection. 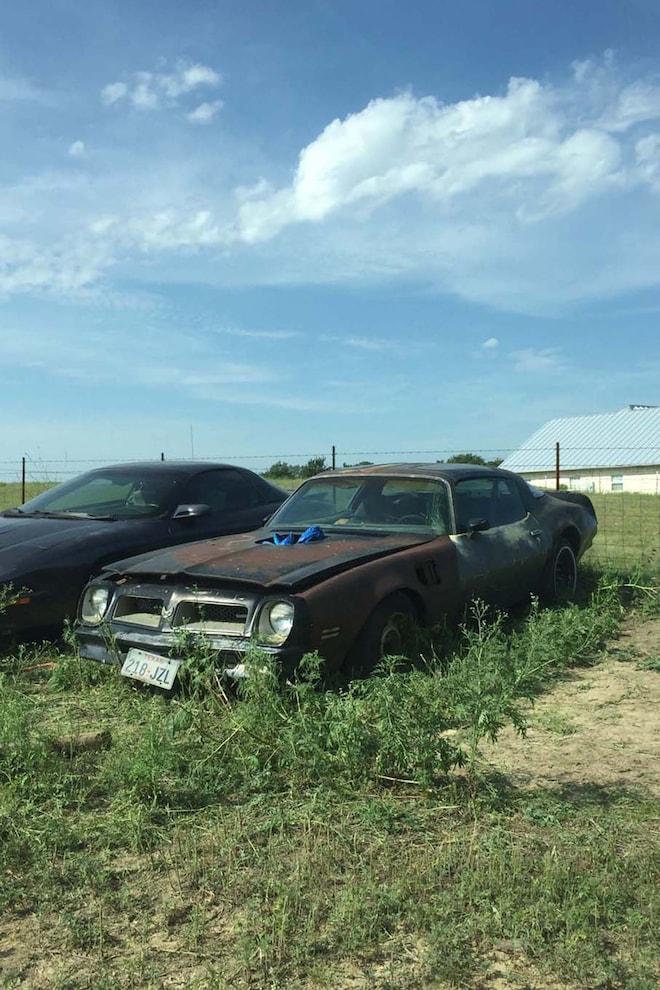 The old Pontiac was mostly covered with weeds and brush. Keeping up with Bobby walking to another car, Barry didn’t have much chance to check it out. “I saw it was black, but you really couldn’t tell if the hood was gold. There was so much rust and patina. I did see it had the 50th anniversary badge on the side.”

Barry was “pretty sure” the Pontiac was a Limited Edition anniversary model, which is a very rare and valuable Pontiac. At the 2019 Mecum Kissimmee auction, a black and gold Limited Edition 1976 Trans Am with a 455/four-speed brought $110,000 (the first LE to crack 100 grand). That sale “rocked the Trans Am world, at least the 1976 Limited Edition guys,” Barry says. 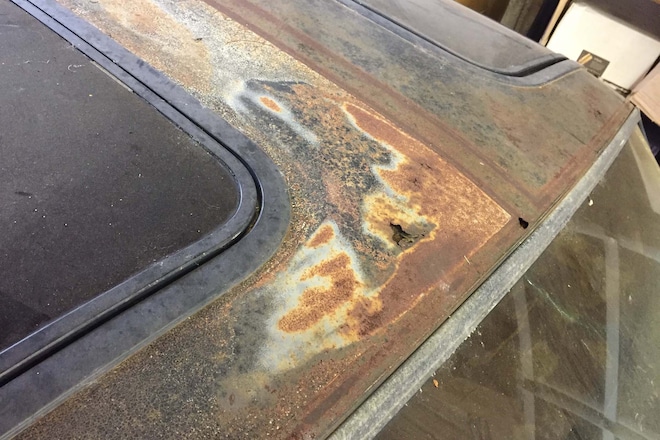 This LE in the weeds appeared to be a 455/four-speed, but it had T-tops. Needless to say, Barry Johnson, who has a collection of 1970s Trans Ams, was very excited to see this diamond in the rough.

July 2017 was hot and humid in Texas. Barry wore shorts. Snakes around the car were a possibility, so it was not a good time to be pawing around. 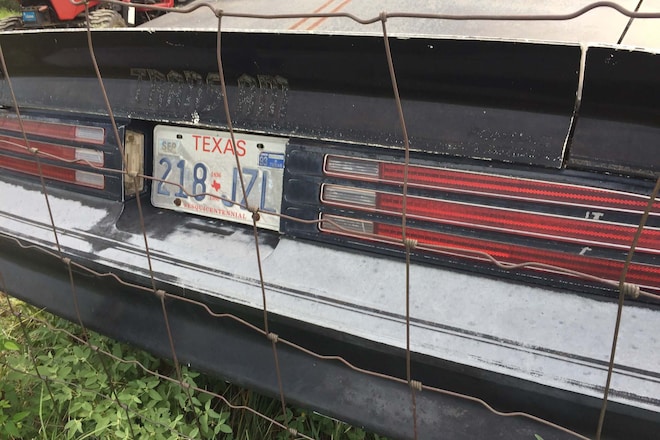 “When we got in his pickup to ride into the fields, there was an AR-15 rifle in between us. I asked him what that was for. He said ‘Oh, we’ve got wild hogs out here, and snakes.’”

The Grand Prix El Camino might have been real, but there was zero documentation. The Trans Am turned out to be a big surprise and the car to buy.

“He said it was his son’s car. He didn’t know if it was for sale or not. His son had driven it in high school and drag raced it in the early 1990s. He was always going to restore it, but never did, and finally set it out there, and basically had forgotten about it.” 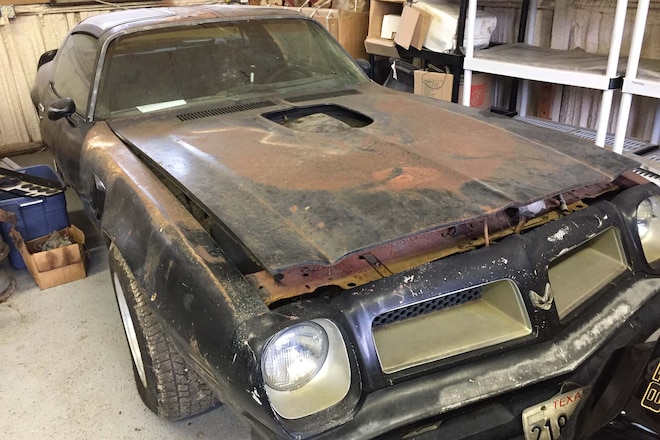 Crawford called his son, also named Bobby. The son was ready to sell. But he knew how rare and special this car was.

In 1976, to commemorate its 50 years as an automaker, Pontiac built a Limited Edition Trans Am inspired by the John Player Special Indianapolis race car, which was black and gold. Total production was 2,590.

The 1976 Limited Edition Trans Am coupe was black and highlighted by gold accents on the body, grille insert, and trim, and even had gold honeycomb pattern wheels. The instrument panel had a gold applique, and the steering wheel had gold spokes. 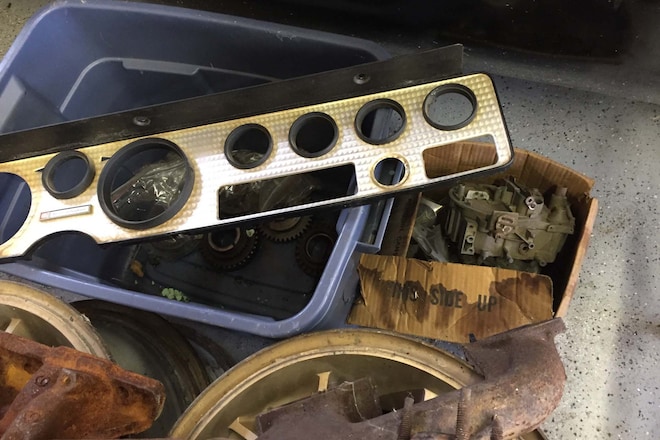 They made the 455 with four-speeds only, or you could get a 400 with an automatic. The field car was one of 319 made with a 455, but it also had the sought-after T-top option, which was discontinued early due to fit issues. Just 110 of the Limited Edition Trans Ams were made with T-tops.

Establishing a price was difficult because the Trans Am was in such poor condition. The car was complete, including a numbers-matching 455. The carburetor was off, but it was in a box. The original four-speed was there, but out of the car. Bobby had changed it out due to broken gears. The interior was “mainly there,” but there was “very little besides seat frames that could be reused.” 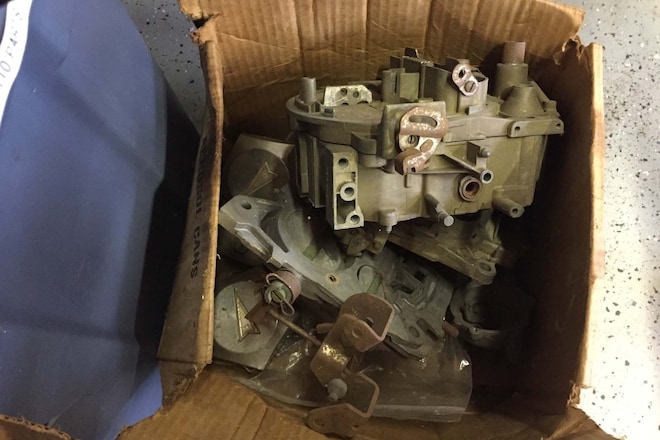 The body was the biggest problem due to rust. The floorpans were “good,” but there was rust behind the rear rockers. Near where the windshield stops and the T-top starts was a little row of rust that let water drip into the interior and damage it. Overall, the Trans Am was a basket case.

The asking price was $15,000, which included some N.O.S. stickers and decal kits that Bobby bought when he worked at a Pontiac parts counter in the 1990s. Barry said he didn’t trust stickers and decals that are old, so he negotiated them out of the deal. 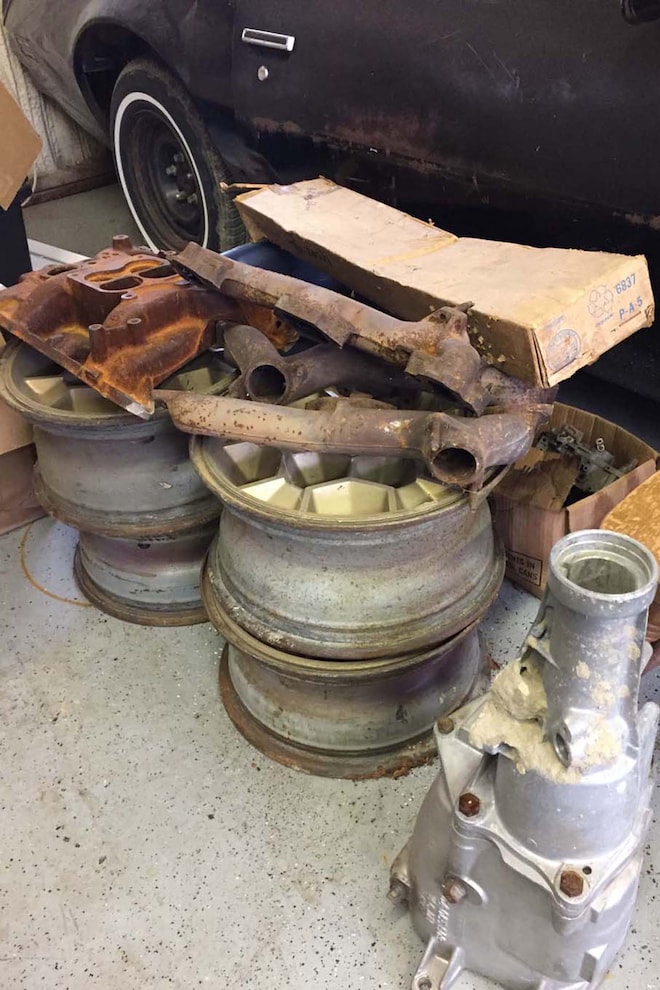 He thought “long and hard” about buying a rusted car, which he has regretted in the past. However, he hated to see such a rare and beautiful car in a field knowing it was going to stay there. They weren’t going to put it on the market. “It’s just a dream long-term that he thought he could maybe restore one day.”

Barry’s decision to buy the Trans Am for $8,000 was motivated by his attachment to these cars more than a desire to restore a car needing everything and requiring rust repair. Crawford had bought the car from an ad in Auto Trader in 1992 with an $8,500 price tag. 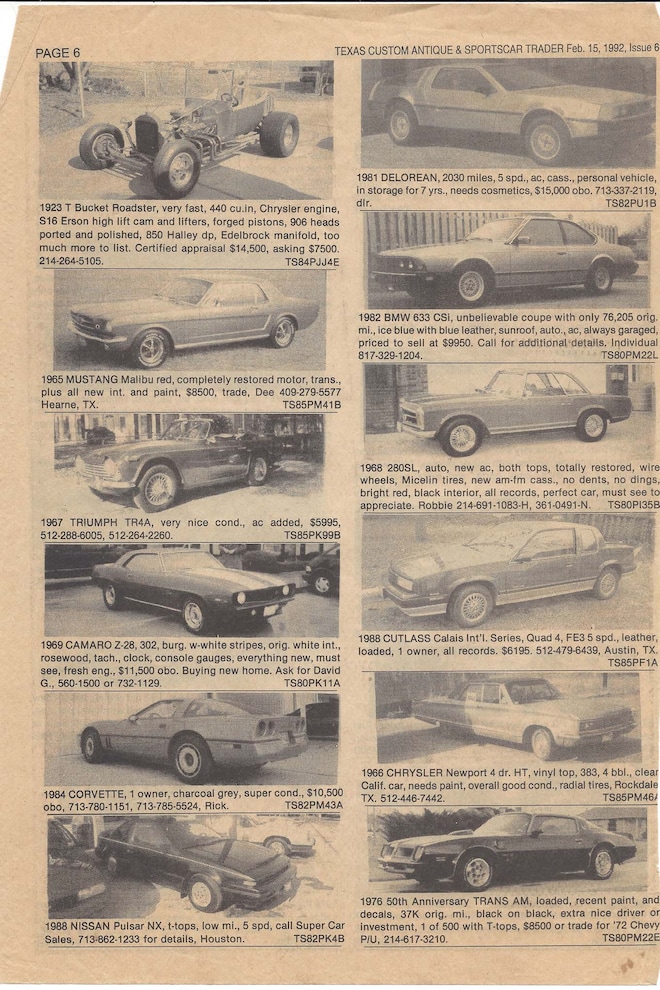 Barry says, “When we were growing up, I had four brothers, and three of us had Trans Ams. Bruce had a ’79. I had a ’78. My older brother Paul had a ’76, so whenever I see one it just takes me back to when I was in high school and I pull in the driveway and there was his beautiful ’76. To me, it’s one of the cleanest, nicest body styles with that front end.” 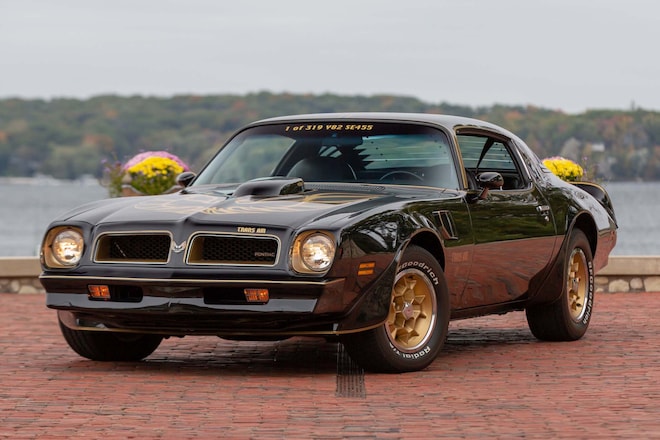 Barry will restore the black and gold 455/four-speed Limited Edition to original. He will not leave it parked.

“It will be a very extensive restoration, but I don’t think I’ll be upside-down by the time we finish.” 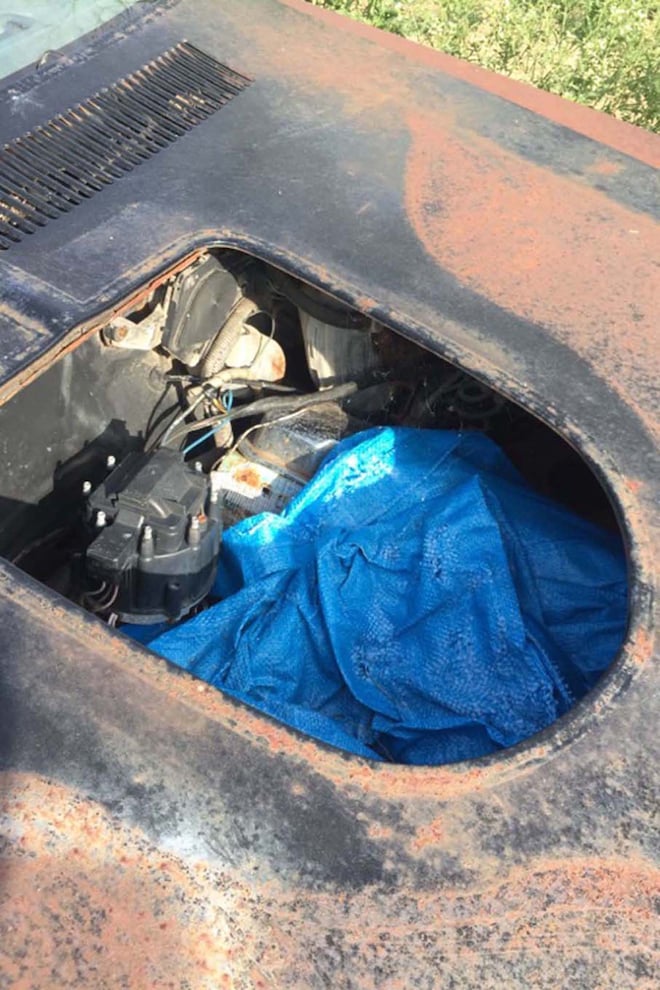 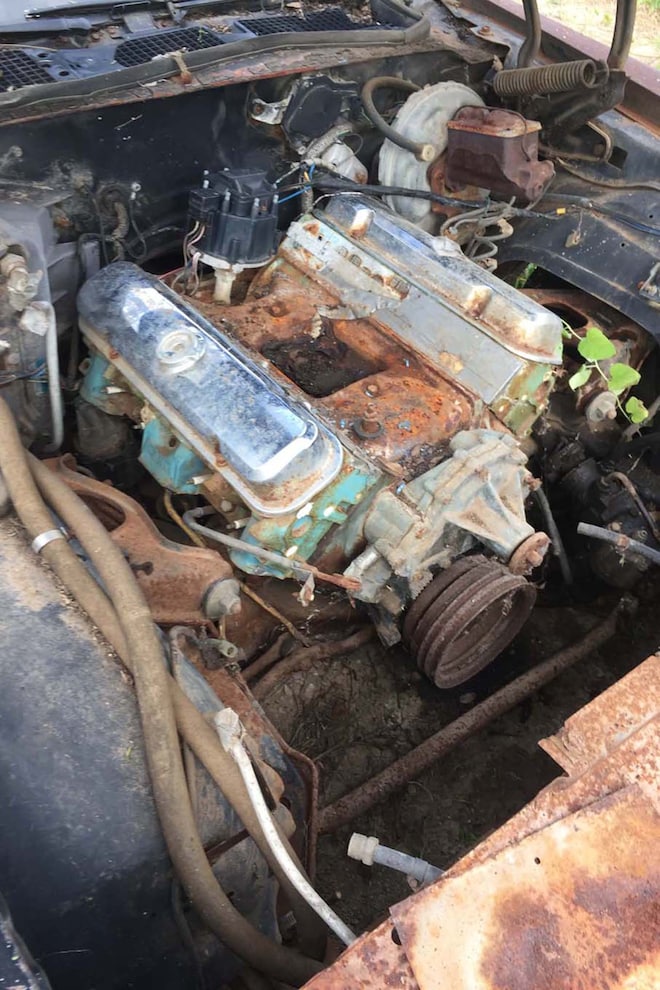 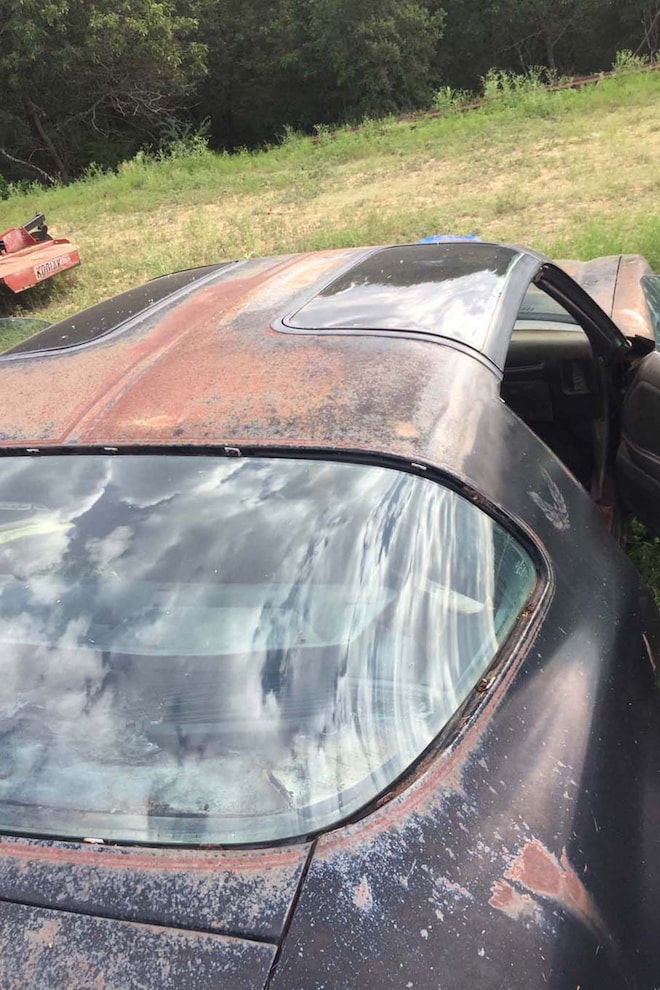 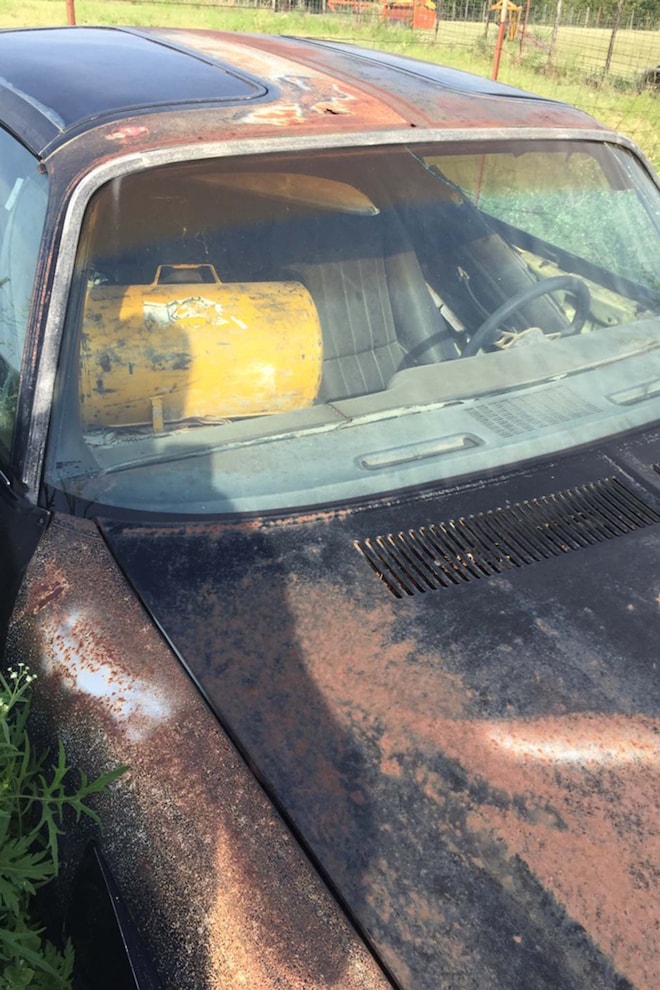