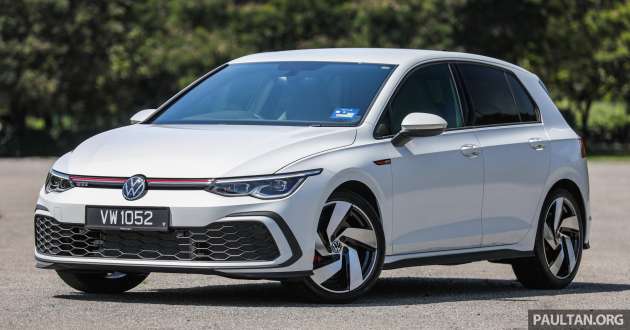 Being popular requires hard work and a bit of luck. But staying popular? That demands everything. As the bestselling Volkswagen model in history, the Golf is perpetually caught in a cycle of one-upmanship, with each new generation of the GTI vying for the same reverence conferred to the Mk2 and Mk5.

How can the new Golf be better? What can be improved? Is more power the answer to everything? Will purists and loyalists be appeased? It’s never easy to clear a high bar, let alone set a higher one.

For many, the Mk7 was a high point. It was quick off the mark, playful in the bends, practical, and even aged remarkably well (especially the Mk7.5). Looking at the Mk8, it’s clear the ambition is to build on that success, so it inevitably finds itself riding on the familiar bones of the trusty MQB. It is textbook evolution, essentially. 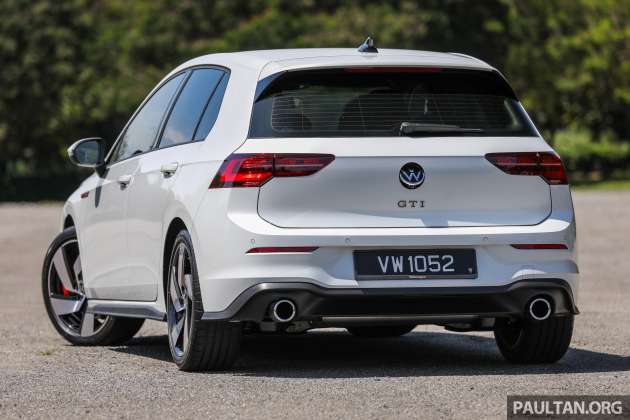 The transversely mounted 2.0 litre four-pot has been massaged to eke out an additional 15 PS and 20 Nm from the Mk7.5 GTI, so it now makes 245 PS and 370 Nm. That also makes it more powerful than the costlier Mercedes-Benz A 250 Sedan, though they both feel equally brisk (6.3 seconds to 100 km/h) at full pelt.

New on the Mk8 is a seven-speed DSG (up from six; also a wet dual-clutch), routing power to the front wheels. The first four ratios are all shorter than the older 6DSG, creating a more rapid turn of speed. In-gear acceleration also feels punchier, with fourth gear taking you past 180 km/h. It’s too easy to go fast these days.

Subsequent gears – including the two final ratios – are taller, so you’ll cruise at a slightly lower rpm (the car freewheels off throttle in Eco mode, too). There is no tiptronic function anymore, so the only way to manually swap cogs is through the steering paddles.

Compared against the Mk7.5, the Mk8 doesn’t feel distinctly quicker. Its power is better spread, though, and it’s only in Sport mode that the exhaust begins to crackle. Loud it isn’t, but audible for sure. A synthesised engine noise is permanently on and cannot be deactivated, not even in Eco mode. How annoying.

Anyway, the driveline still feels buttery smooth. There’s no hint of slippage even when moving off a steep slope, and shift shock is basically absent in everyday driving. It’s clear the DSG has the edge over Mercedes-Benz’s 7G-DCT here, and across all performance metric, really.

Like before, VW’s XDS electronic LSD continues to be offered, but the new logic does an even more impressive job at maximising traction, especially at the very extremes. The factory Bridgestone Potenza S005 tyres (apparently designed for this GTI) are fantastic, but the stock 18-inch wheels could be 10 to 20 mm wider, we think. It’s mostly for looks, plus you get the excuse of trying out the hot new Michelin Pilot Sport 5.

But even in stock guise, the new GTI is immensely sticky, clawing onto the black stuff the way MGK clings on to Megan Fox. It makes you feel like a great driver, that you tried but couldn’t upset the car’s exceptional propensity to remain neutral. We hate to break it to you, but really, that’s the work of a new software called Vehicle Dynamics Manager.

It oversees stability control, e-diff, drive mode and adaptive damper settings, and makes continuous adjustments – also taking into account driving conditions – to optimise handling. The resulting effect is a car that waltzes more gracefully in one corner (hairpin, even) and maintains composure for the next, all while carrying more speed than its predecessor.

It’s like a cheat code to inspire confidence, but at the same time challenges drivers to keep exploring the car’s limits in a safe manner. Speaking of safety…

It’s baffling how Volkswagen Passenger Cars Malaysia (VPCM) managed to arrange for the Golf to be locally assembled outside of Germany and China, yet still not offer anything in the way of driving aids on any of its CKD cars. AEB is standard now for the competition, so VW is half a decade behind – and that’s being kind.

One can make the argument that ADAS is not a necessity for car that primarily appeals to enthusiasts, but that’s not even the issue anymore. VW makes great cars, and having zero driving aids does nothing for optics, which is more pertinent for the brand locally.

All it has are six airbags, three Isofix child seat anchors (including the front passenger seat), and the usual array of three-lettered acronyms. 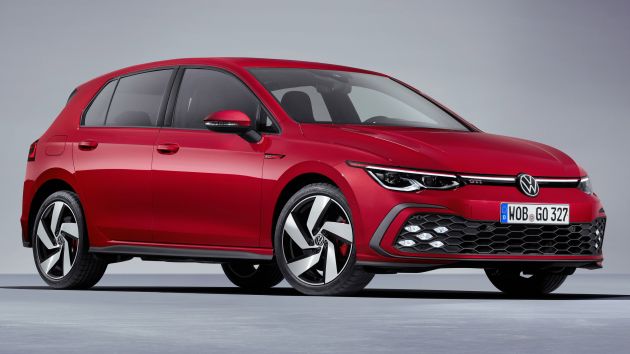 This is how the GTI should have looked…

Those well acquainted with previous Golfs will take some warming up to the Mk8. It’s a good looker, definitely has some presence to it. Lighting is fully LED (with sequential signals at the back) all around, but the omission of Matrix LEDs means there’s no red pinstriping along the top edge of the headlights. The LED unibrow is a nice touch, making it instantly recognisable as a VW, like the Arteon.

The footprint is almost identical to the Mk7, except it’s 26 mm longer, 10 mm narrower and has a lower roofline. The fascia, headlights and prominent lines make for a more organic look, though we wish the X-shaped LED signature lighting (pictured above) was standard. Another painfully puzzling exclusion is auto folding side mirrors. Heck, there isn’t even a function that lets you manually fold them!

The cabin, on the other hand, is a genuinely nice place to be in. The dual displays, tidy centre console, touch panels and premium-feeling surfaces are collectively a massive upgrade from before, and it does feel properly modern.

The 10-inch Discover Media head unit sits closer to eye level this time, which again, is another huge upgrade for us. It’s tilted slightly towards the driver (unlike the back-facing one in the A-Class), feels snappier and operates more fluidly than the older one, plus it now supports wireless Apple CarPlay and Android Auto. Unfortunately, there is no wireless charging tray, so you’ll definitely have to plug in (USB-C only) on longer drives.

Decluttering is a risk, the greatest of which is when the climate control goes completely touch-based. There is no physical blower control button, so changing fan speed is always a two-step affair – you’ll have to press the climate “tile” in the centre cluster first.

This isn’t ideal under erratic Malaysian weather, but it’s not a deal-breaker either. Sitting below the climate tile is the drive mode selector panel. Having this here doesn’t quite make sense because it’s always better to have a physical switch near or around the gear selector. Otherwise, a dedicated button on the steering wheel would be great, instead of the “driver assist” or heated rim buttons. Yeah, not everything makes sense in this initial batch.

The three-tone leather front sport seats score high in our books, providing adequate support in key areas on spirited drives. Heating and ventilation functions are available as well, which is something only Lexus (because CBU) or higher-end luxury cars tend to offer. Build quality feels great considering the price, and the 30-colour ambient lighting system will almost certainly dazzle your friends.

While the cockpit gets completely revamped, the rear quarters seem largely untouched. The seats look and feel nearly identical to the Mk7, and the same applies on the spatial metric as well. One thing’s for sure – it’s definitely more spacious than the BMW 218i Gran Coupe, and has slightly more legroom compared to the A-Class Sedan.

Boot space is marginally down, now offering 374 litres instead of 380 litres on the Mk7. A space-saver spare wheel with Linglong tyre resides under the thick floor board, and you’ll also find a ski hatch, restraint points, and a single 12-volt lighter socket. The seatbacks can be folded, but don’t rest completely flat. 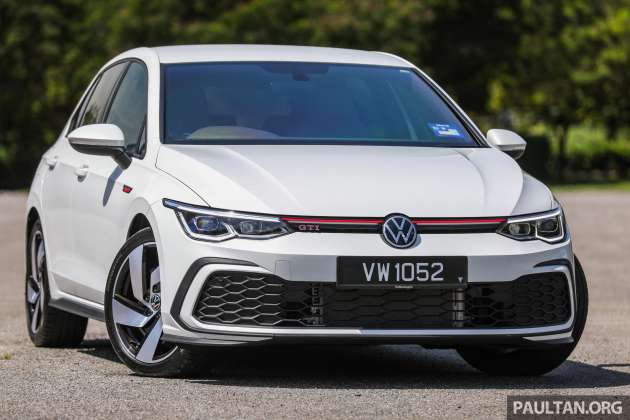 From a value standpoint, the Mk8 GTI is nearly RM28,000 cheaper than the older car. That’s money that can go into a new set of lightweight forged wheels, tyres, a custom exhaust system and even a Stage 1 tune. The Golf’s true appeal, for most enthusiasts, is taking it past stock, because the platform is inherently much more capable, and they know it.

If you own the Mk7, then objectively you won’t find the 8 to drive that much better. Handling is evidently up a notch thanks to the trickery that is VDM, but ride is also a tad firmer from using uprated bushings and springs. The adaptive shocks don’t change rebound rates as much as you think they should, but the hatch never feels too rigid in any circumstance.

We can’t shake the thought that perhaps the Mk8 feels like a mildly diluted version of its predecessor, but only in the sense that it’s so much easier to drive quicker. I still love how the Mk7 drives, and I love that this drives even better. It’s one hell of a hot hatch, and I seriously think you’ll like it. It’s hard not to. For me, it’s definitely this over the 218i GC and A-Class Sedan, hands down.