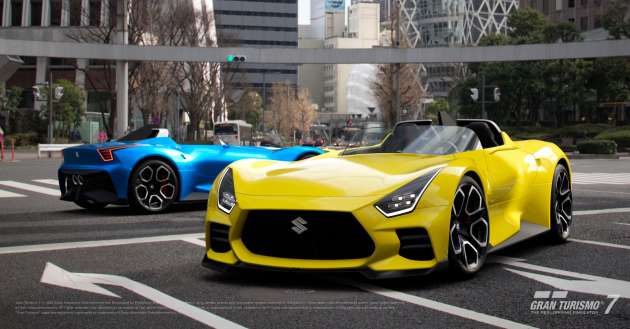 When people think of Suzuki, they usually imagine small and cheerful cars like the Swift and Jimny, or tiny kei cars such as the Alto, Hustler and Wagon R. But the Japanese compact car specialist also has a wild streak that occasionally shows itself in the Swift Sport and the Cappuccino roadster – and lest we forget, the name is also synonymous with superbikes like the GSX-R1000 and the hallowed Hayabusa.

That last one is of particular importance here as Suzuki has shoved the engine from the legendary motorcycle – certified the world’s fastest when it was released in 1999 – into a lightweight two-seater dster. The Vision Gran Turismo, as it’s called, harkens back to the mid-engined GSX-R/4 concept from 2001, which also used a Hayabusa mill.

Luckily, the four-pot gets help in the form of three electric motors – one at the rear, two in front to provide all-wheel drive. Total system output swells to 435 PS, but the big beneficiary of all this is torque, which has been boosted to a respectable 610 Nm. Suzuki says the VGT uses the company’s “cutting-edge” weight reduction technology, so despite carrying four “engines” – and, presumably, a big enough battery to support them – the car tips the scales at just 970 kg. 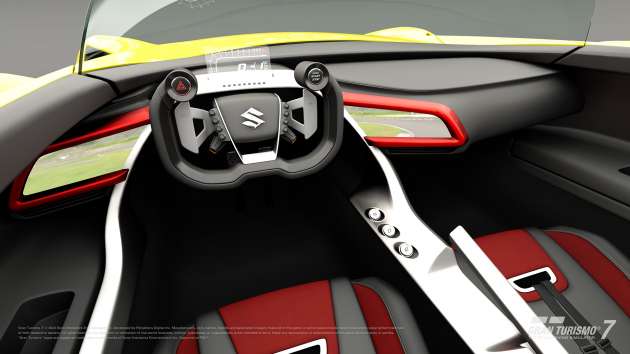 On the outside, the VGT is obviously inspired by the latest Swift Sport but takes that car’s design language to the extremes. Highlights include a stretched triangular headlights, a massive hexagonal grille, gaping corner air inlets, flared wheel arches, long vertical taillights and a massive rear diffuser housing twin central tailpipes.

In place of the SSS’ hatch and upright glasshouse sit a cut-down wraparound windscreen, a long rear deck, silver roll hoops and a central dorsal fin. Super-sized versions of the Swift Sport’s optional 17-inch two-tone alloys fill out the wheel wells, while the sculpted flanks house cut-down doors that may make entry and egress a little difficult. Hey, at least there’s no roof to block your way in, right?

Step inside and you’ll find a cabin that’s as minimalist as they come, featuring just a yoke-style steering wheel (with the hazard light and start buttons housed at the top) and twin silver spars that form a cockpit-like environment. On either side of the ‘wheel are two displays that show the feed from the slender side-view cameras, flanking a transparent instrument readout.

There’s just one bad news, and many of you already know where this is going. The VGT doesn’t actually exist in real life – as the name suggests, it’s a concept developed specifically for Gran Turismo 7. The car made its virtual debut in the racing game as part of Update 1.15 (which also added the Toyota GR010 Hybrid hypercar racer) that was released yesterday.

You can, however, experience some of that exhilaration for real with the 2022 Hayabusa. Equipped with aerodynamically-optimised fairings, the aforementioned new engine, a six-speed close-ratio transmission, launch control and the novel Suzuki Intelligent Ride System (SIRS) with Suzuki Drive Mode Selector Alpha (SDMS-?), it’s yours for RM111,200 in Malaysia.

As for the Swift Sport, the five-door warm hatch is also available locally through official channels, powered by a 140 hp/230 Nm 1.4 litre turbocharged BoosterJet four-pot. There’s no manual gearbox option, however – just a six-speed automatic – and it’s fairly pricey to boot at RM139,900.